What should we make of the rioting in American cities?

Most folk are aware of the tragic death of George Floyd that happened nearly a week ago in Minnesota. The 46yo African-American man was arrested by police but died soon afterwards while in custody. Since then rioting in American cities has been taking place.

It is hoped that all the facts and details of his death will fully come out in a court of law, and justice will prevail – for everyone involved. So that aspect of the case I will not comment on here. But I can discuss the rioting that has ensued – first in Minneapolis and now in numerous other American cities. 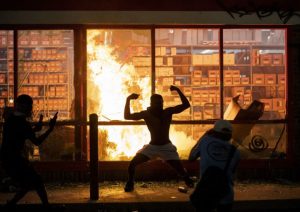 It is one thing to have a peaceful protest over perceived injustice, possible racism, or what might be police overreaction. But rioting, looting, arson attacks, and assaults on police and innocent bystanders is NOT the appropriate response. That is domestic terrorism, not protesting. Michael Brendan Dougherty puts it this way:

We must distinguish rioting and looting from protesting. People do not loot seeking justice for George Floyd, they loot for the loot. People don’t commit arson to make a political statement. What does burning an AutoZone even communicate if it could be translated into politics? People don’t assault those citizens standing in the way of looting and arson as a cry for help or to draw attention to social problems, they do so because looting and arson offer satisfactions to a reprobate will. www.nationalreview.com/2020/05/anger-is-justified-riots-never-are/

And as is also so often the case, we have the usual rent-a-crowd activists involved. Militants from interstate are happy to show up and foment trouble and violence. As US Attorney General Bill Barr said:

Groups of outside radicals and agitators are exploiting the situation to pursue their own separate and violent agenda. In many places, it appears the violence is planned, organized, and driven by anarchistic and far-left extremists, using Antifa-like tactics, many of whom travel from out of state to promote the violence. We must have law and order on our streets and in our communities, and it is the responsibility of the local and state leadership, in the first instance, to halt this violence. www.theblaze.com/news/ag-barr-riots-far-left-antifa

Or as Dominic Green puts it:

There is no right to burn down your neighborhood, but it’s always an option. Freedom means choice, and real freedom must include the choice of self-destruction — but not destroying someone else’s neighborhood. Especially not when the neighborhood is mostly black and poor. That is what the privileged whites of antifa are doing by instigating disorder and destruction in Minneapolis’s 3rd precinct and elsewhere. ‘Every single person we arrested last night, I’m told, was from out of state,’ says Melvin Carter, Mayor of St Paul. Cost-free kicks at black people’s expense: the height of white privilege. spectator.us/antifa-white-privilege-race-minneapolis/

Indeed, as is so often the case in these sorts of situations, the radical left, including groups like Antifa, are more than happy to exploit these incidents for their own ends. And their ends usually entail the same old thing: the dismantling of America. So much of the rioting is based on the same old motivations: hatred of America, hatred of Trump, hatred of police, hatred of whites, and so on.

Sure, not all involved in the riots may feel this way – but clearly many do. Enough is enough already. And recall that a similar situation occurred in Minneapolis in July 2017 – but with a role reversal. White Australian woman Justine Damond was shot and killed by black policeman Mohamed Noor. Recall that there were no riots that followed this action. Cities were not burning and widescale looting did not occur.

Thankfully some voices are being heard, calling for the end of the destruction and carnage. Of interest, some family and friends of Floyd have also decried the senseless violence:

Courteney Ross, Floyd’s girlfriend of three years, told the Star Tribune that she is “heartbroken” over the chaos that broke out in the city Tuesday night. “Waking up this morning to see Minneapolis on fire would be something that would devastate Floyd,” she said. “He loved the city. He came here [from Houston, Texas] and stayed here for the people and the opportunities … Floyd was a gentle giant. He was about love and about peace.” Although she “understands their frustration,” Ross added that she wants people to “protest in a peaceful way.” activistmommy.com/george-floyds-family-calls-for-an-end-to-riots-seeing-minneapolis-on-fire-would-devastate-him/

Also, some well-known Americans have also made a plea for calm:

Reacting to the death of George Floyd, rapper Lil Wayne said Friday that folks need to be “very specific” when reacting to perceived injustices, warning not to blame the “entire force” or an “entire race.” Wayne, whose real name is Dwayne Michael Carter, Jr., noted that he’s unimpressed by “hashtag” and “t-shirt” activism if you don’t actually help the person you’re claiming to get justice for. The rapper also implored activists to “know” what they’re “protesting about” before they advocate a cause. “It’s a bunch of facts that we think we know that we don’t know,” he said. www.dailywire.com/news/lil-wayne-on-floyd-death-stop-blaming-entire-police-force-entire-race-there-are-a-bunch-of-facts-we-think-we-know-that-we-dont-know

As mentioned, it is hoped that the criminal justice system will prevail in the end and we will learn all the facts of this sad case. But the old maxim applies here: two wrongs do not make a right. Police overreaction does not justify crowd overreaction. As Steven Crowder tweeted: “If you’re a police officer violently abusing your power, you’re a THUG. If you’re a citizen looting local businesses for personal profit, you’re a THUG. Any questions?”

Oh, and one last thing, just to show how bizarre all this is: Minneapolis mayor Jacob Frey said that his government was giving face masks to rioters in an effort to slow coronavirus spread. Um, I think most folks who live there would much rather prefer that he worked to slow – and stop – the rioting instead. Too often the police are just standing by watching as all the rioting is taking place.

Let me conclude with a few obvious points that all believers should be able to agree upon. One, racism is always wrong, and biblical Christians should not be involved in it. Two, violent rioting is wrong. Peaceful protests of course are one thing, but destructive and wanton acts of rage and violence are not an option for the Christian.

Three, we need to be aware of the spiritual battles taking place here. What do we see in all this rioting? We see theft, we see killing, and we see destruction. What did Jesus say about the devil in John 10:10? He said this: “The thief comes only to steal and kill and destroy; I have come that they may have life, and have it to the full.”

Four, and most obviously, we need to pray. Franklin Graham, has called for an urgent day of prayer on this:

As our nation convulses with pain, anger, and hatred, this is a moment for Christians to shine for our Lord, who is the Prince of Peace. The Bible says, “…do not let the sun go down on your anger” (Ephesians 4:26), yet each sundown is bringing with it the darkness of more violence and destruction in more cities. Scripture also tells us, “Do not be overcome by evil, but overcome evil with good” (Romans 12:21). This means doing what we personally can do to right wrongs and help the hurting. It also means praying fervently to our Heavenly Father for Him to change hearts and heal our land. The One “who is in you”—Christ—“is greater than he who is in the world” (1 John 4:4).

Because this is true, I am calling on all churches across our nation to make tomorrow morning—Sunday, May 31—a time for special intercession for our nation in their Sunday morning services, whether in person or online.

We need to pray for PEACE, because “the anger of man does not produce the righteousness of God” (James 1:20).

Pray for PERSPECTIVE, because “the wisdom from above is first pure, then peaceable, gentle, open to reason, full of mercy and good fruits, impartial and sincere” (James 3:17).

Pray for PATIENCE, because of God’s “kindness and forbearance and patience” toward us all (Romans 2:4). And pray for an OUTPOURING of His wisdom and direction for our leaders and officials who are dealing with this crisis. Ask God to change hearts and heal this divide in our nation.

Tomorrow is Pentecost Sunday, which marks the day the Holy Spirit filled Christ’s followers after He ascended back to the Father. There is no better time for us to seek a fresh visitation from God upon our lives, homes, churches, communities, and country. billygraham.org/story/franklin-graham-calls-for-nationwide-prayer-tomorrow/

16 Replies to “On the George Floyd Rioting”