Victoria has yet again been subject to another grievous assault by dictatorial thugs:

At 2 in the morning a handful of politicians applauded the passing of a bill to give an authoritarian ruler even more draconian powers for even longer. It gets to be extremely worrying when the real world of politics begins to merge with science fiction. What was that line from one of the Star Wars films? “So this is how liberty dies… with thunderous applause”. 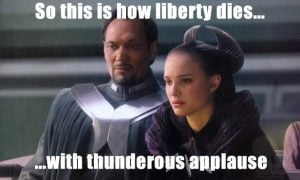 For those who value liberty, democracy and parliamentary rule, what happened earlier today would have sent shudders down your spine. I refer of course to the upper house in Victoria just barely passing Dan Andrew’s extension of his dictatorial powers.

In a 20-19 vote, three crossbenchers ensured that this became a fait accompli. Just in case you are not thrilled with the result, here are the three haters of freedom and their contact details. I do hope you get in touch with them and let them know what you think of this (politely yet firmly of course):

Here are some of the many problems with all this. Andrews had wanted a 12-month extension to his almost unchecked powers. A compromise bill put forward offered basically the same, but for 6 months at a time. Fiona Patten of the Reason Party was the main catalyst behind all this. And this despite appearing on the Bolt Report on Sky News a week earlier, assuring us she would oppose this bill.

The bill itself was sprung on the MPs with just a few hours’ notice. Way to go Dan Andrews. Perhaps the most despicable move here was that of the Greens MP. She was actually on maternity leave, and so had been missing in action for some time now. But she decided to roll up yesterday so she could cast the deciding vote.

Thankfully we had some champions who did all they could to oppose this wretched bill. Bernie Finn of the Liberals gave a terrific 15-minute speech which you can see here: www.youtube.com/watch?v=ZtOoJBUVlXQ&feature=youtu.be&fbclid=IwAR2–HK00qbwQLKkOdhnSvYPFdH-zfNXP0w0EgKeYZ9P_fadsFnXc_RTvrU

He said this when the dirty deal was finalised:

In the dead of night, the Andrews Government used its numbers to gag debate and push through Despot Dan’s legislation to suspend democracy in Victoria for a further 6 months. The vote was 20-19. The Government was supported by Greens leader Samantha Ratnam, Animal Justice Party’s Andy Meddick and the entirely slippery Fiona Patten. A dagger plunged into the heart of Victoria’s democracy at 1.56am on Wednesday, September 2, 2020. A limit of 10 will be permitted at the funeral.

Others also stood strong, thankfully. And yesterday a very important document was released by a number of medical experts. But of course it was totally ignored by Andrews and the Labor Party. Titled “A Doctors’ Open Letter to Daniel Andrews,” this document is so important that I will reproduce it here in full. It says this:

Dear Premier,
We, the undersigned, are senior medical practitioners of various specialities who practice in Victoria and are deeply concerned with the Victorian government’s management of the SARS-CoV-2 (COVID-19) viral pandemic as a public health issue.

The purpose of this letter is to make you aware that not all medical practitioners are in agreement with the Chief Medical Officer and the Victorian government regarding the most effective way to control this disease. We believe that an alternative medical response is required that reflects what we know about the spread of the virus, those who have died from it, and the impact that the stage 3-4 lockdown restrictions are having on the physical and mental health of the general population.

For the sake of people in Victoria with other medical illnesses, it is vital that Stage 4 restrictions be lifted on schedule in mid-September.

This letter details our concerns and recommendations. We are ready to offer any assistance we can to help create and implement a revised, effective and just response to the Victorian situation; to this end we would be pleased to meet with you at your convenience to discuss the matter further.

Focusing on the numbers of cases of COVID-19 is at best an unsophisticated way of looking at disease management. Factors such as the side effects of any policy, its cost effectiveness, the quality of life years lost, and the cost per life saved are fundamental when considering disease management. In addition, any policy to manage any disease must be reviewed in light of new data.

We believe that the government’s initial response to handling COVID-19, via a stage 3 lockdown to ‘flatten the curve’, was reasonable in view of the limited information available at the time on the outbreak in China and the alarming number of deaths in Italy. The initial response, though arguably excessive, was still highly effective in preserving medical capacity and allowing time to co-ordinate a full medical response, with the community accepting that the social and economic consequences were reasonable and for the common good.

However, we now know that whilst COVID-19 is highly contagious, it is of limited virulence.

Whilst an accurate cause of death of a person can be difficult to determine, we are told that since March 2020, 565 Victorian patients have died either with or from the virus (31st August numbers). This compares with annual Victorian deaths of approximately 10,000 patients with cardiovascular disease and 11,000 with cancer. Accordingly, the COVID-19 deaths are a relatively small proportion of the 114 deaths per day that are normally seen in Victoria. In comparison, since the start of March COVID-19 has been associated with 3 of the 114 deaths per day.

Most of the 565 deaths have occurred in nursing homes which according to doctors currently working in this environment have described causal factors related not only to the virus but to other care related issues, including isolation, loneliness, and related diminished nutritional intake.

The vast majority of deaths associated with COVID-19 have occurred in frail people over 80 years, many of whom also had significant co-morbidities. In Victoria more than 73 per cent of known COVID-19 deaths resided in nursing homes. (381 out of 524 and 30 out of 52 in NSW, as of August 30).

For people who are physically well and under 60 years of age, the mortality risk is extremely low. Contrary to what you have said, Mr Andrews, the virus DOES discriminate. See graphs below.

Since June 2020, the death rate has risen sharply in aged care facilities where the risk of transmission of COVID-19 has been unacceptably high. However, the government, and the doctors advising it, have not reviewed their policy in order to focus on this vulnerable segment of the population. Instead, stage 3-4 lockdowns for the whole community have continued for no apparent scientific reason.

As medical practitioners, it is our collective experience that patients are presenting later to us with their medical complaints. Specialist referrals from GPs, and indeed GP workload, have fallen dramatically due to patients’ reluctance to leave home in fear of acquiring the virus. As a direct consequence of this delay, many will have poorer prognoses. This has especially been the case with consultants who treat cancer. A study in the UK estimated an extra 4000 deaths from not screening the four main cancers alone and not from lack of treatment.

In addition, it is our professional opinion that the stage 4 lockdown policy has caused unprecedented negative economic and social outcomes in people, which in themselves are having negative health outcomes. In particular, it has caused or exacerbated depression, anxiety and other mental health issues, as well as contributed to domestic violence, through an extreme and unjustified disruption to family, social and work life. Job losses, home schooling, the isolation of the elderly and single people and the restriction on the number of people who may attend funerals, are but a few examples of how the government’s current response is harming the health of the general population.

In short, the medical, psychological and social costs of the lockdown are disproportionately enormous compared to the limited good being done by current policies, and are relevant factors to be taken into account by any responsible government.

Proposed Amendments to the Public Health and Wellbeing Act 2008 (Vic)

We further note with much concern, that the proposed amendment to the Public Health and Wellbeing Act that would effectively allow the government to continue its current policy to manage COVID-19 even if there were to be zero cases over a period of time. This is unfathomable and certainly contrary to the objects of the Act, which require accountability, proportionality and collaboration to be fulfilled.

Specifically, the legislation explicitly mandates that the government’s decisions on public health initiatives must be transparent, systematic and appropriate, with members of the public given access to reliable information in appropriate forms to facilitate a good understanding of the issue. In addition, the legislation acknowledges that decisions will be enhanced through collaboration between all levels of government and industry, business, communities and individuals.

For all these reasons, ordinary sensible people if properly informed, should inevitably conclude that the current government policy is ill focused, heavy-handed, and unjustifiable as a proportionate response to the risks posed by COVID-19 to the public’s health.

As the virus is not going away soon, and an effective vaccine may not be available for a considerable period of time, if at all, we respectfully call upon the government to do the following:

1/ The State of Emergency not be continued past September 13 with an agreement made for parliament to be allowed to openly discuss and debate appropriate medical plans to manage the current COVID-19 crisis. A panel of non-politically aligned medical and health-related experts be selected by a bi-partisan parliamentary group to provide the transparent and active role of informing and advising government decisions and responses to the epidemic.

2/ Ensure adequate measures, testing, and protection of the vulnerable, especially those in aged residential care environments and their families and carers.

3/ Clearly communicate to the public the medical evidence-base, objectives and timelines of any proposed future management plans, with open disclosure of the processes and negative consequences, to inform those discussions and decisions.

4/ A broader focus be given to the health and well-being of Victorians, by utilising all relevant available data and by calculating the costs and harms, including the social, economic, family, emotional, psychological and spiritual impacts on the community, of any decisions and plans to manage the COVID-19 crisis, thereby explaining and justifying the merits of these plans as a reasonable and proportionate response.

5/ To review regularly the outcomes of any management decisions and demonstrate a willingness to modify plans as new data and insights become available.

Today was a very dark day in Victoria. Of course things have been very dark here for some time now. But this bill simply means things will get even worse for all the hapless and increasingly hopeless inmates languishing in the People’s Republik of Victoria.

20 Replies to “This Is How Democracy Dies”