What a dark day for Australia:

Although I have only lived in Australia for a bit over three decades, I think I feel the same way most home-grown Aussies must feel. So many of them are now asking the question: ‘Is this the Australia we grew up in?’ They are exclaiming, ‘We cannot believe this is happening to us!’ 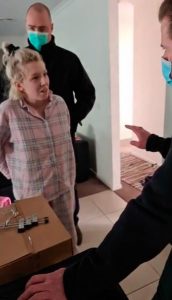 Yesterday I wrote about how democracy dies – certainly in Victoria, under a power-mad Premier. On that same day two incredible stories emerged which should shock every one of you. Both received a huge amount of coverage. The first story is really quite mind-blowing. It involves a pregnant woman in her own home being handcuffed, arrested and taken away by the police. Her crime? Posting something on Facebook! As one news report states:

Victoria Police officers have been filmed handcuffing a pregnant woman over a Facebook post. Footage was shared online by a Miners Rest couple, northwest of Melbourne, on Wednesday afternoon. As seen in the video above, it shows the woman arguing with police, who claimed she was inciting people to protest the Victorian coronavirus lockdown this coming weekend.

Groups of anti-lockdown protesters have tabbed September 5 for a series of planned protests across the country. Several other people have already been arrested and charged with incitement, including a 76-year-old man. In the video, the woman says she wasn’t aware she was breaking the law by uploading content in advocacy of protest. “I wasn’t breaking any laws by doing that,” she says to an officer.

He replies: “You are, actually, you are. That’s why I’m arresting you.” The woman – whose partner is filming the confrontation at the time – then offers to take the post down. “I’m happy to delete the post, this is ridiculous,” she says. “My two kids are watching, I have an ultrasound in an hour, I’m happy to delete the post.” However, the officers in the video execute a warrant, seizing computers and mobile phones, including the one that was filming the incident.
7news.com.au/lifestyle/health-wellbeing/victoria-police-filmed-handcuffing-pregnant-woman-over-anti-lockdown-facebook-post-c-1286738

OK, this is where we are now at in the Victorian Police State. If armed police will come into a home and cuff and arrest a pregnant mother in her pyjamas (due to go to her ultrasound appointment) in front of her children, they will arrest anyone. You have been warned. This is serious.

It seems we will all need to have our phones with the video cameras ready to go at a moment’s notice if we hear a knock at the door. With more and more ordinary Australians being arrested by the police in Dictator Dan’s dystopia – including pregnant mothers – we may well need to record everything.

What happened to our basic human rights and constitutional freedoms? One writer performed a useful service by sharing this bit of information:

Selected extracts from the Victorian Charter of Human Rights:

15 Freedom of expression
(1) Every person has the right to hold an opinion without interference.

18 Taking part in public life
Every person in Victoria has the right, and is to have the opportunity, without discrimination, to participate in the conduct of public affairs, directly or through freely chosen representatives.
catallaxyfiles.com/2020/09/02/viktoria-police-arrest-a-hardened-criminal/

Andrew Bolt, Alan Jones and Paul Murray all ran with this story on Sky News last night. This 3-minute video of the episode with Alan Jones is a must watch: www.youtube.com/watch?v=hcHUGZGT9V4&feature=youtu.be&fbclid=IwAR1Mdob_qP9RYXya8MliAGvd4-6nAh-dt2AMxT5cqDqXRTdoWxsaN7x0w5U

Another person wrote up how the Bolt Report covered it:

Andrew Bolt’s program, “The Bolt Report” discussed the incident about that poor pregnant woman being arrested in front of her kids. Rohan Dean was also on the show and both stated that it was an absolute disgrace. They suggested that the video be sent to those cross-benchers who voted for the extension of the State of Emergency. Dean also stated that it was about time Morrison “showed some bloody leadership. Finally, stand up and say we are not going to have pregnant women arrested in their own home for posting online a legitimate political point of view, particularly, but not exclusively, when they are on their way to an ultrasound.”

He also called on Morrison to “boot this clown (Andrews) out of the National Cabinet.” Andrew Bolt stated: “Shame on every single politician that voted for those powers to give the state such, such extraordinary control over people.” It was very powerful! www.skynews.com.au/details/_6186901505001

The second story from yesterday which should concern all of us is summed up with this headline: “Largest quarterly GDP fall on record.” So our 28 consecutive years of non-stop economic growth is now over, and we are in a massive recession, thanks mainly to Victoria and its draconian lockdown measures.

Yes corona is certainly responsible for all this in part, but we must be clear here: in many respects this is the direct result of government policies, such as shutting down economies and causing businesses everywhere to be closed. Overwhelmingly this is a Covid lockdown recession. It is economic vandalism.

Those in the public sector are doing just fine for the most part, with their guaranteed taxpayer-funded salaries. But those in the private sector and in small businesses are being smashed. So there really are two Australias, and we are NOT all in this together.

Our children and our grandchildren are the ones who will be carrying this burden when we are long gone. Those in the media and our politicians who fed us on panic-porn about a virus with a very low fatality rate have allowed our economies to be destroyed, with recoveries – if they happen – likely to take decades.

How many hundreds of thousands of businesses are gone forever because of these severe lockdown policies and irrational border closures? How many mental health problems will we see, and how many lives will be lost to suicide as a result?

This is certainly not the Australia we grew up in. And if things keep going on like this, it never will be again. God have mercy on Australia.

31 Replies to “Is This Really Australia?”