We must avoid like the plague fake Christians pushing fake gospels:

When Donald Trump popularised the notion of “fake news” he was certainly onto something. Without question there is plenty of fake news out there. But there is no end to phoniness and falsehood in so many other areas as well. Thus in the religious sphere we have heaps of fake Christians pushing fake gospels and running with fake spirituality.

Examples of this are never ending. Any number of fakes can be cited here, and I have called out many of them over the years. One clear example of this is a guy in Adelaide who loves to be praised by men in the secular press, extolling his version of Christianity. I refer to Brad Chilcott. This in part is what is said about him: 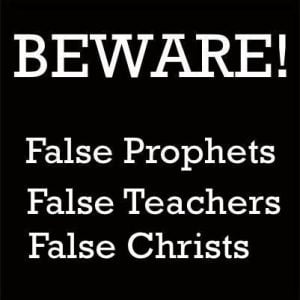 “Brad was the founder and Lead Pastor of a progressive and inclusive Christian community in Adelaide called Activate Church and was on the national steering committee of Christians for Marriage Equality. Brad writes regularly for The Guardian.”

There we find everything we need to know about this guy: a “progressive” into “inclusion,” in favour of faux marriage and a fav writer for the hyper-leftist Guardian. We really need say no more. But I have written about this guy before. Here for example I spoke of his radical and completely unbiblical pro-homosexual agenda, and pro-homosexual marriage agenda: billmuehlenberg.com/2016/10/19/another-church-sells/

And here I documented his radical leftist agenda, commitment to interfaith foolishness, and so on: billmuehlenberg.com/2015/11/03/cluelessness-is-not-next-to-godliness/

This is a truth you can bank on: when you effectively say the Bible is full of errors and that we need to reinvent Jesus and the gospel into the likeness of radical secular left ideology, you know you will end up with folks saying the most destructive, moronic and unbiblical nonsense imaginable. Indeed, it seems the mind turns to mush when folks reject the living God and replace him with the gods of secular leftism.

Consider an opinion piece he had in the leftist Adelaide Advertiser on September 23. In his short article entitled “Vigils a cover for preying on vulnerable,” this guy actually tells us how evil Christians are for daring to pray outside of abortion clinics. He claims it is “the deployment of prayer for the purpose of public shaming”.

Yes, you heard that right. According to this false prophet, those seeking to kill their own babies are not evil – only those concerned Christians who peacefully and silently pray for them are. These believers, he ludicrously claims, are actually using this as a cover to prey on people!

According to Brad, such prayers – indeed, simply the very presence of these prolife Christians – is “likely to cause distress or anxiety” to these mothers about to kill their own offspring. Yes he actually said that! This is his bizarre brand of Christianity – something the Apostle Paul called “another gospel”.

So let me see if I got this straight. If a group of Christians wanted to pray peacefully and in silence outside of where a murderer lives or works, or a child rapist, or an arsonist, or a racist, or a bank robber, this is making these people feel shameful and uncomfortable about what they do, and this is unloving and unChristlike. And this is something Jesus would be fully against.

Um, really? So every time Jesus called out the sins of others – and he did this regularly and routinely – according to this guy, he was being unChristlike! Yep, we sure do not want murderers or paedophiles or baby killers to feel bad about what they do. How unloving is that!

OK Brad, I think I got it now: Jesus did not come to call out sin and urge sinners to turn from their sin and repent of their sin. Instead, he came to tell sinners to feel just great about their sin. But he did come to rebuke anyone who dares to say sin is, well, sin, including the murder of unborn babies.

All that Jesus really hates is when sinners feel ashamed and anxious of their sin because Christians are praying for them. Gee, I am amazed that I and billions of other Christians have got the gospel so very wrong for 2000 years. How nice of Brad to come along and tell us who the real Jesus is and what his real message is all about.

Here then is the gospel according to Brad: Jesus loves baby-killing, but he absolutely hates Christians who pray for the end of such barbaric bloodshed. Glad we finally got the gospel message sorted out. It’s nice to get some clarity on this after Christians misunderstood it for two millennia.

Oh, and does Brad offer us any biblical basis for this completely new and radically different gospel? Oh yes indeedy. He mentions two texts – completely stripped of their context and their meaning. He mentions the passage about believing what you pray about. And he informs us that this means we can stay home and pray, and have no need to go anywhere to pray – including to the place that you are specifically praying about.

Yes it is true that we can pray anywhere, but are we really to believe that this radical activist has never gone anywhere to pray and protest about something he is deeply concerned about? Really? He has just told his duped followers ‘you can stay home and pray – no need to have a peaceful presence anywhere’.

He then mentions the verse about how we should not be like the hypocrites when we pray. Oh, I see: what Jesus REALLY meant by that verse was any Christian who loves people enough to pray for them, including those who want to murder their own babies, are being hypocrites. Hmm, so THAT is what Jesus meant by this verse! Talk about Scripture twisting.

On the same day that his article appeared, he tweeted about it with these words: “Prayer shouldn’t be weaponised for shaming and condemnation. How is that loving your neighbour?” So caring about human life, about the sanctity of life, and praying that the butchery and barbarism of the abortion mill will be stopped is about “weaponising prayer”? Really Brad? Good grief!

Clueless leftists who put ideology well ahead of the Bible will never get it, but the biblical Christian always understands this truth: loving others means willing their highest good. And that always means praying that they turn from their sin and find new life in Christ. And it certainly means saying no to baby-killing. Just how is killing the unborn being loving and Christlike?

All up there were three responses found under his tweet, including this one: “I’m an atheist, but I value your commentary on this subject. Prayer should never be a weapon. Thank you for speaking up.” Um, Brad might think this is really neat – all part of his apostate interfaith deception – but when atheists think everything you have said is just peachy, then you know you might have a real problem with your version of Christianity.

Here is the bottom line folks: when you come upon some character claiming to represent Jesus Christ who sees baby-killing as a virtue, and prayers for life a vice, then you know you have three clear biblical realities staring you in the face.

The first is what the prophet Isaiah warned about: “Woe to those who call evil good and good evil, who put darkness for light and light for darkness” (Isaiah 5:20).

The second is what Jesus warned about: “Beware of false prophets, who come to you in sheep’s clothing but inwardly are ravenous wolves” (Matthew 7:15).