Yes a very real crackdown on Christianity is now underway in the West:

In many parts of the world over the past two millennia Christians have had to learn how to live out their faith in places where heavy persecution takes place. But now that the West is increasingly joining in this anti-Christian bigotry and ugly persecution, all of us need to wake up real soon and try to understand just how we will cope with all this.

Some of us have been warning for decades now that a real crackdown on Christianity is coming to the West, often at the hands of the various sexual militants, joined by the cancel culture, political correctness, identity politics, wokeness, cultural Marxism and the social justice warriors. 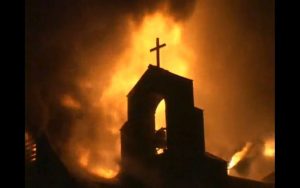 The secular left has declared all-out war on believers, and in the new Biden administration we’ll see this ramping up big time – and pronto. At the end of the day, all the radicals and leftists know that it is biblical Christianity that is the one last major obstacle to their plans to fundamentally transform the West into their sordid radical image. So the church is in its sights, and all Bible-believing Christians are now Public Enemy Number One.

And this is NOT just a matter of political differences. This is very real, visceral hatred of Christians. It is demonically driven. It is not just a slightly different take on politics and social issues: this is full-on hatred of Christianity and those who fully run with it.

We see obvious examples of this every single day. Here in Australia for example we have the palpable hatred and demonic rage against Christian leader and tennis champion Margaret Court. Hardcore lefties like the ABC’s Kerry O’Brien are so full of rage that they are refusing to be associated with her.

Thus he has refused to receive his Order of Australia award, saying her beliefs were “deeply insensitive” and “divisive.” Um, it is of course O’Brien who is being deeply insensitive and divisive here. And a trans doctor in Canberra handed back his award that he had received in 2016, also because of Court.

Good grief, what is wrong with these people? They are obsessed with their hatred. Court is one of the most loving and caring persons that I know. But for daring to believe in biblical truth, she is the object of despicable scorn and vilification. See my earlier write-up on her here: billmuehlenberg.com/2021/01/24/australias-most-shameless-christophobe/

Let me look at two more aspects of this. The first has to do with how some folks are saying that all the world’s problems are somehow due to Christian Trump-supporters. Some of these Never-Trumpers with such a bad case of TDS are getting more intolerable by the day.

One American social media friend of mine, Laurie Higgins, just wrote about yet another attack on Christians who dared to support Trump by the increasingly irrational David French. She said this:

I had some additional thoughts about David French’s marching orders for Christian Trump voters, including some thoughts about his claim that Trump is responsible for the instability in America. But first, when reflecting on the woulda, shoulda, couldas of the 2020 election, it’s important to remember the awful decision Christians had in 2016. For many evangelical Christians, Trump was not anywhere close to their first choice but Hillary was worse yet.

If, or rather when, the left establishes policies so malign and oppressive—policies that rob parents of their parental rights; rob conservatives of the right to speak, assemble, and exercise their religion freely; rob scholars of the freedom to teach and publish; rob Americans of the ability to earn a living; rob citizens of the right to bear arms; and rob those deemed unfit for life of their lives—who or what will be culpable for the revolution that eventually comes? Will it be the rhetoric of those leading the revolution, or will it be the words and deeds of the oppressors?

The rest of my thoughts here: illinoisfamily.org/faith/david-frenchs-marching-orders-for-christians-in-america/

Yes quite right. And let me say this: four years ago I liked French and worried a lot about Trump. Now after time and some maturation, I like Trump and am worried a lot about French. I was never a Never-Trumper, but I am quickly becoming a Never-Frencher.

As another social media friend of mine, Robert A. J. Gagnon put it, commenting on a Washington Post article, “Biden’s ambitious LGBT agenda poises him to be nation’s most pro-equality president in history”:

Not “pro-equality” but pro-oppressor of persons of faith and suppressor of free speech and free exercise of religion, science, and logic. And still we have deluded NeverTrumpers like David French and Russell Moore thinking that we should apologize for casting an effective vote against the gay/transgender & abortion idolatry of the Biden/Harris administration. Nothing that Trump did threatens my speech, free exercise of religion, employment, Christian schools, my family, or my church. I wish I could say the same about Biden.

Yes the Biden/Harris administration will be THE major tool of the crackdown on Christianity in America. As I said in an earlier piece:

Simply being able to push through the so-called Equality Act will transform America in ways not even imaginable just a decade ago. Any Christian or other American who dares to hold to biblical and traditional views on marriage, family and sexuality will be targeted big time. The reprisals for daring to differ will be draconian and relentless. Welcome to a whole new round of persecution. billmuehlenberg.com/2021/01/21/on-the-change-of-government/

Let me conclude by running with a new column penned by Rod Dreher. I have already stated that I believe his new book, Live Not By Lies, is the book of the year. While we are only 26 days into the new year, it certainly was the book of the year last year when it was first released, and I believe it will still be the book of the year for all of 2021 – that is how important I view this book to be. See my review of it here: billmuehlenberg.com/2020/12/30/a-review-of-live-not-by-lies-by-rod-dreher/

In his newest article Dreher speaks about another person who is convinced that his book is vitally important. And he is someone who is worth listening to. I refer to “an experienced military intelligence officer, now retired: Lieutenant Colonel (USA, Ret) Alexander Braszko.”

He had contacted Dreher to tell him what a valuable book this was, and Dreher returned the favour by asking to interview him. Here is part of that interview. It begins:

Rod Dreher: Thanks for your kind words about my book. Given your background and expertise, what are its most important lessons for Christians?

Alex Braszko: Rod, the most important lessons I garnered from your book are:

It is clear that after the January 6 assault on the Capitol, we will all be living in a very different security environment. I don’t want to put you in the position of saying whether that is good, bad, or otherwise. What I would like to know is what specifically should political and religious conservatives be doing now to accommodate ourselves to this new reality?

First, we must understand that the witch hunt we see taking place today against conservative Americans by politicians and mainstream media will continue for the foreseeable future. Dealing with doxing and public criticism for ascribing to our beliefs is something we should all expect. Hacks into our online accounts, monitoring of our online activities are all realities of the world we live in today.

The closing question and answer are certainly worth paying careful attention to:

What would you say to people who believe the things you and I are talking about here are alarmist?

My grandfather had a typing business in Russia. In 1917, on a dark and rainy night, my grandfather returned home late in the evening from work. Through the rain, he saw the lights on in his house, but noticed men surrounding it and men inside the house. He witnessed some terrible things being done to his family that night by Bolsheviks as he hid in the shadows, the full details of which he discovered much later, and learned that those men were after him, a White Russian, to “give him the bayonet” because of his political leanings and the fact he was a business owner. One of his children was killed that night, and atrocities committed against his wife and daughter. Communists shattered his world. He returned a few years later after escaping Russia with a group of Cossacks to fight the Soviets. People told him he was being alarmist in the beginning, too. Nothing but the grace of God prevents those same things from happening in our own country today. So, no, I don’t think I’m being alarmist. I think we’re being vigilant, I think we’re being observant, thinking critically about what happened historically in many other countries, looking at similarities taking place in our own country today. And it’s really not good what we’re witnessing.

It’s much easier to stick our heads in the sand, to divert our eyes from Truth and turn to the ease and conveniences offered up to us. We like to tell ourselves, “If we just trust our political leaders, buy into mainstream narratives and secular dogma we hear every single day, things will be easier!.” But we know our hope is in our Savior, in Christ Jesus. As much as he suffered for us, buying into the lies the world feeds us is an insult to His sacrifice and love for us. We need to fight the good fight and run the race for our salvation, because in the end, that’s what truly matters. www.theamericanconservative.com/dreher/how-to-prepare-for-coming-crackdown-live-not-by-lies/

Yep, those who have been there and done that must be carefully listened to. Dreher features many folks in his book who lived under Communist tyranny, and they all say that what is happening in America and the West is greatly alarming them.

And the worst part is this: most Westerners simply do not know and do not care. These dissidents, and Dreher, and myself and others are seeking to sound the alarm. The question is this: will we take heed before it is too late?

I just noted on the social media that the American evangelical group The Gospel Coalition – the outfit that assured us that Christians could not vote for Trump, and Biden was not so bad – now has an article warning us about how dangerous the Democrat ‘Equality Act’ is and how it must be opposed. Of interest are all the comments under that FB post slamming TGC for being the ones who helped to bring all this about in the first place.

26 Replies to “The Impending Crackdown On Christianity”