Here are some more doozies we really should avoid:

There is never a shortage of material to keep this irregular series humming along. Every day someone will post something online that is questionable, laughable, unbiblical, or just plain stupid. Memes and quotes that are way off the mark are found there all the time. 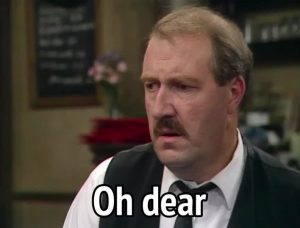 Christians are often guilty of this. Sometimes these posts and memes contain SOME truth – but usually with enough error as well to render them pretty much useless. Half-truths can only go so far. And if you emphasise a certain biblical truth, but over against other biblical truths, you can also still get into dangerous territory. Here then are five more sayings and quotes which are basically worth giving a miss:

“The Bible isn’t a rule book, it’s a love letter. It’s the story of God’s heart for His people.”

This is another case of half truth and half error, mixed together, resulting in a quite misleading, and even unbiblical claim. The Bible is not a rule book? Really? What do you call the Ten Commandments? And the other 600 rules or laws found in the Old Testament?

And there would likely be just as many rules and commands found in the New Testament. One Greek verb mood is known as the imperative – it is a command. Many hundreds of imperatives are found in the NT. We are constantly commanded to do this or that as Christians.

And as Jesus made clear, to have a love relationship with God is NOT done apart from obedience to rules and commands:

-John 14:15 If you love me, keep my commandments.
-John 14:21 Whoever has my commands and obeys them, he is the one who loves me.
-John 14:23-24 Jesus replied, “Anyone who loves me will obey my teaching. My Father will love them, and we will come to them and make our home with them. Anyone who does not love me will not obey my teaching. These words you hear are not my own; they belong to the Father who sent me.
-John 15:10 If you obey my commands, you will remain in my love, just as I have obeyed my Father’s commands and remain in his love.
-John 15:14 You are my friends if you do what I command.

-1 John 4:21 And this commandment we have from him: whoever loves God must also love his brother.
-1 John 5:2-4 This is how we know that we love the children of God: by loving God and carrying out his commands. This is love for God: to obey his commands. And his commands are not burdensome, for everyone born of God overcomes the world. This is the victory that has overcome the world, even our faith.
-2 John 1:6 And this is love: that we walk in obedience to his commands.

“Submitting to oppressive authority is not a sin – Jesus did.”

Sorry, but this post is not all that helpful, and is in fact quite misleading – even unbiblical. No one is saying it is necessarily a sin to submit, but that is not the point. Not standing up against evil and injustice IS a sin when we are clearly called to do so.

The disciples in the book of Acts constantly had to say yes to God while saying no to the state. For 2000 years of Christianity this has always been the case, whether it was a Wilberforce or a Bonhoeffer or a Martin Luther King. Often the believer must disobey the state in order to obey God.

As to Jesus, he was on a unique mission, so it is foolish to say that in this respect we must do the exact same. We are not sent by God to die for the sins of the world – Jesus was, so he did just what he was meant to do. But to always blindly submit to the state, even when it commands us to sin or do evil is not being a biblical Christian. It is being a mindless sheep. But the biblical material on this is clear, as I discuss here, eg: billmuehlenberg.com/2020/05/15/the-state-is-not-absolute/

“As a Christian, Jesus never promised that you wouldn’t suffer or have troubles but that he will deliver you out of them all. Amen!”

Well, it depends on what is meant by being ‘delivered’ of course. If it means that God will be with us in our trials and sufferings, and that he will help sustain us in the midst of these things, then yes, that is true. But if it means that we will somehow miraculously be whisked out of every tight spot, every bit of hardship and trouble, and every case of persecution and suffering, then this is clearly false.

Jesus of course was not spared his suffering and torment. He had to endure them, not be delivered out of them. And that is true of millions of Christians over the past 2000 years. I always like how the chapter on the ‘heroes of the faith’ gives us examples of both. Compare and contrast these two passages:

Hebrews 11:34 [Some] quenched the fury of the flames, and escaped the edge of the sword; whose weakness was turned to strength; and who became powerful in battle and routed foreign armies.

Hebrews 11:37 They were put to death by stoning; they were sawed in two; they were killed by the sword.

Some saints escaped the edge of the sword while some other saints died by the edge of the sword. My last – and quite famous – example sort of ties all this together. Daniel’s three friends were NOT delivered from the fiery furnace in the sense of not being thrown in there. They were. But they were delivered in the sense of not being burned. See Daniel 3.

But that is no guarantee that all other believers will be miraculously delivered in this way. Indeed, bear in mind what the three told the king: “Shadrach, Meshach and Abednego replied to him, ‘King Nebuchadnezzar, we do not need to defend ourselves before you in this matter. If we are thrown into the blazing furnace, the God we serve is able to deliver us from it, and he will deliver us from Your Majesty’s hand. But even if he does not, we want you to know, Your Majesty, that we will not serve your gods or worship the image of gold you have set up’” (Dan 3:16-18).

“God will not give you more than you can handle.”

This one sort of follows on from the one just above. And again, it is another saying that sounds good, and has a hint of truth to it, but can still be rather misleading. We often say that God’s grace is sufficient, and rightly so. If we do go through really hard times – say, intense persecution – God will provide us with the grace needed to get through it.

But the experiences of God’s people over the millennia testifies to just how difficult things can be. God was with them, but their hardships and suffering were very real indeed. And even the Apostle Paul could speak this way. Consider what he said in 2 Corinthians 1:8-9:

“For we do not want you to be unaware, brothers, of the affliction we experienced in Asia. For we were so utterly burdened beyond our strength that we despaired of life itself. Indeed, we felt that we had received the sentence of death. But that was to make us rely not on ourselves but on God who raises the dead.”

Yes, we can trust that God will be present with us in our trials and tribulations, and he will provide comfort and grace, but what we go through will not necessarily be pain-free, or a walk in the park. We need to resolve now that whatever might come our way in the future, we will remain true to him as he remains true to us.

“Christians are not perfect, just forgiven.”

We hear this one all the time, and even see it on car bumper stickers. It is another slogan that contains a mixture of truth and error. Yes, Christians are forgiven. No question about it. And yes, total sinless perfection is not something any of us will achieve in this life.

But too often this phrase becomes an excuse for careless Christian living – even as a cheap excuse for sin. The truth is, all throughout the New Testament Christians are commanded to press on in the Lord, seeking – by God’s grace – to become as holy and righteous and godly as they can be. Jesus himself told us in Matthew 5:48, “Be perfect, therefore, as your heavenly Father is perfect.”

Speaking of cheap excuses for sin, just this morning I read again about this whopper coming from the lips of Aaron as he tried to tell Moses why the Golden Calf was made. Check this out from Exodus 32:22-24:

“Do not be angry, my lord,” Aaron answered. “You know how prone these people are to evil. They said to me, ‘Make us gods who will go before us. As for this fellow Moses who brought us up out of Egypt, we don’t know what has happened to him.’ So I told them, ‘Whoever has any gold jewelry, take it off.’ Then they gave me the gold, and I threw it into the fire, and out came this calf!”

Oh dear! But I discuss this saying further here: billmuehlenberg.com/2018/07/31/stop-making-cheap-excuses-for-sin/

And in this recent piece I seek to get the biblical balance right in seeking for maturity in Christ, while acknowledging we all have a long way to go: billmuehlenberg.com/2021/01/25/yes-we-are-all-messed-up/

8 Replies to “And Even More Dumb Memes and Posters”