We have NOT learned the lessons of history:

Censorship is now alive and well in the West. Whether it involves refusing or shouting down unpopular speakers at college campuses, or banning or shadow-banning unwanted content on the social media, it is now everywhere to be found. And guess who are the main ones being targeted here? 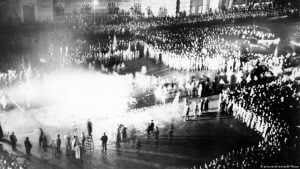 I happen to have my books for sale on places like Amazon. Although you can find them there today, there is no guarantee that they will still be there tomorrow. That is because Cancel Culture is running amok, especially among our Tech Giants and Woke Corporations.

We used to have to worry about Big Government when dealing with ugly censorship. Now we have a whole range of other bodies also to be alarmed about, be they universities, the mainstream media, or other mega-groups that now control the flow of information.

The Tech Giants are certainly among the worst of the lot here. Whether Facebook or Google or YouTube or Pinterest or Twitter, they have all decided to become hardcore censors, keeping the public from seeing, hearing or reading anything they deem to be unacceptable.

This morning for example when I opened my Facebook page, I found not one but SIX of these messages: “We removed a post you liked that had false, potentially harmful information about COVID-19.” Um, let me translate that for you: “We are just like the Fascists of old, and we are now into high-tech book burning. Anything that we disagree with will be removed. Only secular left propaganda is now acceptable.”

Of course the Rona is just one area where they are ramping up censorship. Anything from climate alarmism, to sexuality, to politics, to history, to race, to culture, to whatever – it is all now the subject of strict censorship. And when these groups have near monopoly powers, then we really are living in a dictatorship run by the leftist elites.

You dare not speak truth on any hot potato issue today or you WILL be shut down and silenced. Conservatives and Christians are of course the number one targets in all this. Your chances of freely sharing truth on these platforms are shrinking rapidly.

As but one example, I mentioned recently how Amazon has just pulled one of the most important books so far on the trans revolution, Ryan Anderson’s When Harry Became Sally. Go ahead, try to find it there – it no longer exists. Those who dare to speak the truth about the trans tsunami – and about biology and reality – WILL be censored.

All tyrants and dictators are especially keen to ban, censor or radically rewrite history. They know that if they can separate a people from their own past, they can much more easily control them. And to be unaware of history means you will be unaware of past censorship.

Consider the issue of book burnings. The Nazis were infamous for this of course. But as more and more Westerners grow up clueless about history – even recent history – that means they will not realise just how dangerous this current round of censorship is.

So let me speak more to this matter. The Holocaust Encyclopedia has a good article on book burning, so let me share some of it here. It begins:

Book burning has a long and dark history. Book burning refers to the ritual destruction by fire of books or other written materials. Usually carried out in a public context, the burning of books represents an element of censorship and usually proceeds from a cultural, religious, or political opposition to the materials in question….

In 1933, Nazi German authorities aimed to synchronize professional and cultural organizations with Nazi ideology and policy (Gleichschaltung). Joseph Goebbels, Nazi Minister for Popular Enlightenment and Propaganda, began an effort to bring German arts and culture in line with Nazi goals. The government purged cultural organizations of Jewish and other officials alleged to be politically suspect or who performed or created art works which Nazi ideologues labeled “degenerate.”

In an effort to synchronize the literary community, Goebbels had a strong ally in the National Socialist German Students’ Association (Nationalsozialistischer Deutscher Studentenbund, or NSDStB). German university students were among the vanguard of the early Nazi movement, and in the late 1920s, many filled the ranks of various Nazi formations. The ultra-nationalism and antisemitism of middle-class, secular student organizations had been intense and vocal for decades. After World War I, many students opposed the Weimar Republic (1919–1933) and found in National Socialism a suitable vehicle for their political discontent and hostility.

On April 6, 1933, the Nazi German Student Association’s Main Office for Press and Propaganda proclaimed a nationwide “Action against the Un-German Spirit,” to climax in a literary purge or “cleansing” (Säuberung) by fire. Local chapters were to supply the press with releases and commissioned articles, offer blacklists of “un-German” authors, sponsor well-known Nazi figures to speak at public gatherings, and negotiate for radio broadcast time.

In a symbolic act of ominous significance, on May 10, 1933, university students burned upwards of 25,000 volumes of “un-German” books, presaging an era of state censorship and control of culture. On the evening of May 10, in most university towns, right-wing students marched in torchlight parades “against the un-German spirit.” The scripted rituals called for high Nazi officials, professors, university rectors, and university student leaders to address the participants and spectators….

Not all book burnings took place on May 10, as the German Student Association had planned. Some were postponed a few days because of rain. Others, based on local chapter preference, took place on June 21, the summer solstice, a traditional date for bonfire celebrations in Germany.

Nonetheless, in 34 university towns across Germany the May 10th “Action against the Un-German Spirit” was a success, receiving widespread newspaper coverage. In some cities, notably Berlin, radio broadcasts brought the speeches, songs, and ceremonial chants “live” to countless German listeners. The promotion of “Aryan” culture and the suppression of other forms of artistic production was yet another Nazi effort to “purify” Germany. encyclopedia.ushmm.org/content/en/article/book-burning

Today we do not necessarily need large book burnings on city streets. The Tech Giants and others have all that covered. They can simply prevent people from reading or watching or listening to anything they do not want them to be exposed to. It is just as effective.

Much more can be said about all these matters. But consider just one aspect of this: eBooks. They too are actually quite insecure, and the censors can target them just as easily – even more so. Let me quote from an article that appeared last year on this:

Have you bought an eBook of Coming Apart by Charles Murray? Or maybe you bought Gone with the Wind on some video streaming service. Perhaps you’ve paid for Hamilton, The Simpsons, or Shakespeare’s Othello in digital format. Are you ready for them all to disappear from your digital library for being problematic in the eyes of Amazon, Google, or Apple?

That’s a live question in a cancel culture where corporate America seems to be uniformly on the side of the left-wing culture warriors. It’s also a great reason for you to build up your real-life library of books, records, DVDs, CDs, newspapers, and other physical media.

HBO temporarily pulled Gone With the Wind from its streaming service. That’s not a huge deal, especially since they later put it back up. But it’s easy to see the early rise of a wave of cancellations in which Big Tech just erases problematic stories or songs or movies — or any work by problematic authors or creators.

If you tried to pay for the entire run of The Simpsons, you probably found that an episode with Michael Jackson was removed from the supposed complete works. One of the creators had an unsettling defense of that: “I’m against book burning of any kind. But this is our book, and we’re allowed to take out a chapter.”

Unfortunately, similar reasoning applies to the platform owners. Amazon, Google, Apple cannot come to your house and torch your CDs. But as long as you’re using their virtual bookshelf, they can remove chapters that clash with their worldview. YouTube regularly pulls videos for ideological violations or videos that clash with the proclamations of politicized and corrupted multinational entities. Amazon has made similar decisions.

It’s not far-fetched to imagine “your” digital content disappearing. Apple could just decide to erase that Poguessong for a bad word. Poof! Gone. Amazon could remove Mel Gibson works that you thought you owned. Certainly, any and all Charles Murray books could be canceled. Facebook is under immense pressure to take down content just because it’s too Trumpy. Twitter says it will pull down your tweets if you violate their ideological rules. www.aei.org/op-eds/in-a-cancel-culture-you-cant-trust-amazon-google-and-apple-with-your-libraries-buy-physical-media/

This is just one area in which we need to be very careful. The same new technologies that make for easy use of media and communication can also be used as instruments of fascist censorship. And this is already happening.

I have made this warning before: there may soon come a time when you look to see what is new on CultureWatch, but when you try to find it, you will discover it no longer exists. This is not alarmism: this is simply pointing out exactly where we are now heading.

Be afraid – be very afraid. Better yet, fight back now while you still have a chance.