The trans assault on all things is far more than blokes wearing dresses:

Here is a truth that you can take to the bank: If they can ban Dr Seuss books today, there is nothing to stop them from banning the Bible tomorrow. If even non-persons like Mr Potato Head and the Muppets can be considered to be hateful and the subject of bans today, you can count on it that Christians will be treated in the very same way tomorrow.

If you are not up on such bans (yes they have actually happened), I discuss them here: billmuehlenberg.com/2021/03/02/6-more-cases-of-moronic-moonbattery-the-world-is-going-insane/

And I discuss the cancel culture’s war on Christianity here: billmuehlenberg.com/2021/03/01/criminalising-christianity-prayer-and-the-bible/ 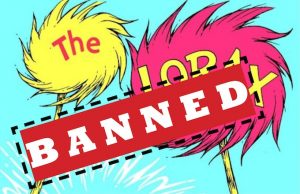 Some of us have been warning about all this for many decades now. We warned about how the radical feminists, the radical homosexuals, and now the radical gender benders are seeking to crush everything in their path until all resistance is finally silenced.

These secular left militants and sexual revolutionaries are NOT just looking to have their agendas heard, but to silence all opposing views and to have complete control of the public debate. As Erwin Lutzer puts it in his new book, We Will Not Be Silenced:

Secularists are not content to “live and let live.” They are not satisfied with pluralism and the exchange of ideas. They seek not just to be equal but to dominate. That which was at one time condemned must not simply be tolerated, it must be celebrated. And that which was at one time celebrated must be condemned. Only then will these crusaders see their vision of utopia come to pass. Their goal is the total capitulation of the culture to their point of view. Dissenting voices are shamed into either submission or silence.

All these groups might talk a lot about how much they value diversity and tolerance and acceptance, but they are the most fascist groups around. The trans militants are every bit as bad as the earlier activists when it comes to shouting down and shutting down all opposition and contrary points of view.

And when this radicalism is being pushed and enforced from the top down, as in Biden’s Brave New America, it means we are all at risk of great harm and danger. And it gets very practical here: even school kids and women are severely put at risk. In a new article Carl Trueman says a pastor friend shared with him a problem he now has to deal with. He writes:

The problem my pastor friend faces is how to counsel parents of teenage girls who will not drink anything before going to school lest they have to use the bathrooms that, thanks to the stroke of President Biden’s pen, are now open to teenage boys who think—or claim—to have been born in the wrong bodies. It seems that anxiety and physical discomfort caused by the new bathroom policy will now be the new normal for young high school girls. Trans activists like to use the language of “safety” as a way of playing to the aesthetics of our therapeutic culture and delegitimizing their critics. Well, these biological women no longer feel safe. Their spaces, like their gender, have been stolen from them by men and for men. They now feel themselves to be in such danger that they cannot even hydrate before school lest they have to use the restroom during the day. America has had a number of presidents whose appetites meant that they arguably posed a danger to many women who crossed their physical paths; but the current president has out-performed them all. His policies have made him a danger to all women everywhere, even in high school restrooms.

Because of the Biden administration’s transgender policies, some girls will be subject to voyeurism and assault in the very place where they should be guaranteed privacy and safety. Some female prisoners will be raped by men pretending to be women in a place where the state has confined them. Tragedies will flow from this. Of that there can be no doubt. And I truly hope that the victims do not simply seek justice in the criminal courts against the immediate perpetrators. I hope they will also sue the people who pushed these policies: the ideologues who knew exactly what they were doing; the doctors and insurance companies who implemented and financed this cultural Ponzi scheme; and maybe even the tomfools who, like the liberals of Verkhovensky’s revolutionary strategy in Dostoevsky’s Demons, enabled the whole shambles through their fear of seeming insufficiently liberal to their friends, neighbors, and Twitter followers.

It is quite clear that the safety and well-being of children and women means nothing to these people. And so only when it starts costing them their money, their reputations, and their sense of security, will we see any major change of direction in the culture as a whole. Only then will teenage girls be able to go back to school without fear of being violated. Or, indeed, of being dehydrated. www.firstthings.com/web-exclusives/2021/03/a-new-pastoral-problem

Trueman speaks much more about all this in his important new volume, The Rise and Triumph of the Modern Self (Crossway, 2020). In the book he asks how the West got to where it is now at. More to the point, how is it that we find the millennia-old institutions of marriage and family largely destroyed; the bizarre situation of 4-year-old boys deciding they are somehow now girls – all agreed to and egged-on by adults, complete with bodily mutilation; and the almost total trashing of morality, biology and reality – to name but a few matters?

His book seeks to answer such questions. It explores in great detail what it describes in its subtitle as, “Cultural Amnesia, Expressive Individualism, and the Road to Sexual Revolution.” In 400 pages the American historian traces the move away from the Judeo-Christian worldview into the Brave New World of the sexual revolutionaries.

As he states in his introduction:

At the heart of this book lies a basic conviction: the so-called sexual revolution of the last sixty years, culminating in its latest triumph—the normalization of transgenderism—cannot be properly understood until it is set within a much broader transformation in how society understands the nature of human selfhood. The sexual revolution is as much a symptom as it is a cause of the culture that now surrounds us everywhere we look, from sitcoms to Congress. In short, the sexual revolution is simply one manifestation of the larger revolution of the self that has taken place in the West. And it is only as we come to understand that wider context that we can truly understand the dynamics of the sexual politics that now dominate our culture….

The sexual revolution does not simply represent a growth in the routine transgression of traditional sexual codes or even a modest expansion of the boundaries of what is and is not acceptable sexual behavior; rather, it involves the abolition of such codes in their entirety.

He of course has an entire chapter on transgenderism, and two quotes from it will have to suffice here:

The issues we face today in terms of sexual politics are a symptom or manifestation of the deeper revolution in selfhood that the rise and triumph of expressive individualism represents. The language of self-expression and the negative attitude to the norms of society at large are entirely consistent with Rousseau and the Romantics. Now refracted through the lens of the post-Freud preoccupation with sexuality and the post-Marx, post-Nietzsche framework of power and oppression, the spirit of the Romantics finds its home in the radicalism of the transgender lobby, and the transgender lobby finds its home in the L and the G and with feminism.

He looks at this political alliance and its problems, such as highlighted by feminist Germaine Greer who argues that transgenderism is the exorcism of women and of history, and then says this:

One could expand Greer’s point to include both parents: transgenderism involves the exorcism, or erasure, of parents in general, for they play no role in the identity of the transgender person at his or her most fundamental level of being beyond actualizing his or her mere existence.

Then there is the fact that the movement claims to be able to bend reality to its will, or, perhaps more accurately, denies the existence of a natural authority and thereby arrogates to itself the right to create that reality. Again, transgenderism is the most radical form of this mentality: my identity is entirely my own creation.

Yes, it is a new type of magic, or of New Age mind over matter hocus pocus, or simply of old-fashioned idolatry which the Bible warns against: pretending to be god and defining your own reality. Not content with our actual created status, we shake our fists at the one who made us so, and scream with every ounce of our newly reconstructed being, ‘I will determine my own fate and my own future – even my own biology and reality. And woe to anyone who dares to stand in my way.’

That explains why coercive utopianism is always a feature of the sexual radicals. When you try to remake anything and everything into your own make-believe image, coercion must always be used against all the recalcitrants. The heavy hand of the State must always be harnessed to force everyone else to embrace and celebrate the New Normal.

Since I began this article by looking at how Christianity itself is now directly threatened by all this, let me finish this piece the way Trueman finishes his book: by discussing the fate of the church in this new radicalised sexual culture that we find ourselves in. He writes:

In the second century, the church was a marginal sect within a domi­nant, pluralist society. She was under suspicion not because her central dogmas were supernatural but rather because she appeared subversive in claiming Jesus as King.…

This is where we are today. . . . [A] pluralist society has slowly but surely adopted beliefs, especially beliefs about sexuality and identity, that render Christianity immoral and inimical to the civic stability of society as now understood. The second-century world is, in a sense, our world, where Christianity is a choice—and a choice likely at some point to run afoul of the authorities.

Yes, that is exactly where we are at today. And it keeps getting worse each passing day. Unless the church rises up and resists with every bit of strength it can muster – by God’s grace – it will soon be back to non-voluntary prison ministry for all of us.

14 Replies to “The Trans War On Everything”