In my books, Heidi Mund is a Christian superstar, a champion, and a hero. We so desperately need more like her. Instead we have millions of gutless, spineless effeminate churchians who will never open their mouth about anything. Indeed, our churches are filled with craven cowards and spineless wonders.

So who is Heidi Mund? She is a small, frail, quiet German woman, but one who allows the Holy Ghost to empower her greatly, speaking out forcefully and fearlessly against syncretism, idolatry and the lies of the enemy. Her story has been captured in a video which has gone viral, and rightly so. You can see the 6-minute video here.

All this has to do with a very worrying new development which I have written often about: the interfaith movement and Chrislam. As a Muslim imam was doing his Allahu Akbar thing in the middle of an old Reformation church, this was just too much for this brave and conscientious woman.

It was yet another foolish interfaith service – you know the ones I am talking about. The ones in which all the duped Christians become slavish dhimmies, while the Muslims simply consolidate their power and take over the churches from within. 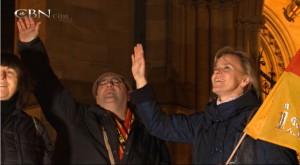 Articles have already been written about this feisty supersaint, so no need for me to repeat myself here. Let me quote parts of a recent piece on her: “Islam continues to grow in power and influence across Europe. But at a recent concert in Germany, one Christian woman decided to stand up to it. ‘The Armed Man: A Mass for Peace’ by Welsh composer Karl Jenkins was supposed to be an interfaith event to bring Christianity and Islam together.

“But when the Muslim imam began his call to prayer during the concert, he was interrupted by a small woman in the balcony proclaiming that ‘Jesus Christ alone is Lord of Germany,’ and shouting, ‘I break this curse.’ She also invoked the name of Martin Luther and warned the audience that what was happening was ‘a lie’.”

Hey, that alone tells me she is my kind of woman. Indeed, she is more of a man than most men I know of. Finally someone with guts and conviction, willing to face hostile, deceived mobs to speak the truth. But wait, there’s more:

“It happened on Nov. 10, 2013, at the Memorial Church of the Reformation in the Rhineland city of Speyer, built to honor Martin Luther. It isn’t just any church. It’s a monument to the Protestant Reformation and a memorial to the spiritual transformation of Germany.

“It was at this spiritual landmark that a Muslim imam was invited to give the call to prayer. When the brave German woman, whose real name is Heidi Mund, heard about the event, she prayed. ‘I was asking Jesus, “Lord, shall I go there?” So, when I have to drive one and half hours, you know, I think, “Is it worth it to go or can others go?” So, this is human laziness, yeah?’ Mund recalled.

“She grabbed her German flag emblazoned with the words ‘Jesus Christ is Lord’ and headed for the concert, still not sure what she would do when she got there. ‘Until the imam started with his shouting, I did not really know what to do. I was just prepared for what God wants me to do,’ she told CBN News. Then the Muslim call to prayer began, and Heidi said she felt something rising up inside her.

“‘I would call it a holy anger,’ she recounted. ‘And then I rose with my flag and I was calling and proclaiming that Jesus Christ is Lord over Germany.’ ‘My purpose was, I broke this curse because [Muslims] say, “Only Allah is the Lord. He is God, the only God.” And I broke this curse in this church and I broke it over my country,’ she continued.

“And she repeated the words of Martin Luther in 1521 after he refused to recant his faith in scripture alone: ‘Here I stand. I can do no other’ and ‘Save the church of Martin Luther!’ Video shows another concert-goer trying to calm her by saying, ‘This is a concert for peace.’

Both are murderous political ideologies bent on conquest, happy to use any means – including bloodshed and terror – to achieve world domination. And her story is even more amazing here, given that she was not always a Christian:

And like a true woman of God with a true prophetic calling, she is believing God that things can be turned around big time: “Mund is trusting God for a miracle in what is a very wealthy and, some would say, spiritually dead nation. ‘I know nothing is impossible for my God. Nothing. Nothing. Nothing. Nothing,’ she said.

“‘From a human point of view I feel our country is lost. It’s already lost. It’s done. Because I see so many changes in the country, in every area,’ she continued. ‘But I trust God that he has a “Plan A” and that my country is not lost and that He will reach us and He will come and change the whole situation’.”

Wow, what a woman. Amen and amen. Just imagine if we had 100 more Christian champions in the world like her. With that kind of Holy Ghost firepower we could do tremendous things for Christ and the Kingdom. But sadly our churches are packed full of weenies, whiners and woosies.

Perhaps never before in church history do we have so many invertebrate Christians on the planet – at least in the West. I suspect that 95 per cent of believers today would never open their mouths in this way in defence of their faith and their Lord.

They are instead gutless wonders who live in fear: fear of what others might think; fear of being criticised; fear of offending people; fear of being seen as controversial and intolerant; fear of rocking the boat. Well, such cowards have no place in the church of Jesus Christ.

We are in desperate need for a million more Heidis. Lord raise them up please. Replace our wimps with warriors and our cowards with courageous saints. Oh God, raise up an army of anointed, Holy Ghost-empowered warriors who will never fear man but only fear you.

Thank you Lord for Heidi Mund. And since this is Germany we are talking about, let me finish with the words of another brave German Christian, from his hymn “A Mighty Fortress Is Our God”:

“And though this world with devils filled should threaten to undo us, we will not fear, for God has willed his truth to triumph through us. The Prince of darkness grim, we tremble not for him. His rage we can endure for lo his doom is sure – One little Word shall fell him.”