One of the most frightening and characteristic features of a police state is the terrible occurrence of being woken in the middle of the night by state security forces. Whether it was Nazi Germany, Soviet Russia, or Mao’s China, this was an ever-present reality and fear for many millions of ordinary citizens.

No one was safe. At any time the police forces could be at your door, and the next thing you know you are dragged off by the authorities, often never to be seen again. And usually absolutely no crime was committed – it is just that the state saw you as a threat to their existence. 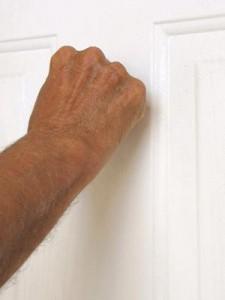 Of course millions of people were rounded up in such totalitarian societies, and millions were killed. Individual dignity, humanity and freedom meant nothing to these ugly statists. Only the good of the Fatherland or the New Man or the utopian state or whatever mattered.

We soon will celebrate the 70th anniversary of D-Day, in which brave lads from the free world sacrificed their lives to put an end to such tyranny and injustice. The horrible reality of Nazi Germany had to be resisted, and countless lives were lost to keep the world free of such evil.

But the almost unthinkable is now happening: the once free world is well on its way to becoming another police state. Even though so many lives were lost and so much blood was shed seven decades ago, it seems that we have not learned the lessons of history.

Instead, we are simply repeating its mistakes. I have been warning for decades now – to mostly deaf ears unfortunately – that we in the West are headed in a very precarious direction. But the loss of freedoms and the restriction of our liberties are not happening overtly, but covertly.

And the means by which democracy is slowly but surely disappearing are very sneaky, incremental, and piece-meal. We don’t even know it is happening. Indeed, it is often occurring through what seems to be all rather sensible and necessary legislation.

Thus we have things like anti-discrimination laws; equal opportunity legislation; racial and religious vilification acts; and so-called hate speech laws springing up everywhere in the West. Again, they sound like they might be useful things to have, but they are mostly nefarious laws which are mainly aimed at silencing unpopular people with unpopular opinions.

Indeed, my recent time in Europe and England greatly alarmed me. The iron fist of the homosexual juggernaut is utterly frightening to behold. The ordinary citizen seems to be quite powerless to resist it in any way. Any faulty (non-PC) thought or speech is quickly and mercilessly pounced upon by the militant homosexual activists and their stooges in the state apparatus.

I spoke with many brave Christian resistance fighters while there. Some of them are right in the middle of long, drawn-out and expensive legal battles with the ‘tolerance brigade’. These groups endlessly scream about tolerance and diversity, yet show absolutely no tolerance to anyone who dares to disagree with them.

And they are using the heavy hand of the law to make sure that everyone complies with their dreams for a brave new world. Western legislatures are jumping in the bed with the activists, doing their every bidding it seems. It is a very scary place to be in at the moment.

As a clear indication of all this, just moments ago I received this shocking and concerning email from one of these folks I had just met in the UK. This brave soul said this:

Dear all. The police just came around to my house with an anonymous complaint made about my online activities. They warned me that “homophobia” is a criminal offence. I said, “What about freedom of speech?” They said, “Complaints have been made.” I said, “Who made them?” They said, “We don’t know, they come from another police force in another area.” I pointed out to them that I get abuse and death threats all the time and even showed them on Facebook, but they were not interested. They said “This is a warning.” So what is the next step? The knock on the door in the middle of the night?

This courageous defender of biblical truth is exactly right of course. That knock on the door in the middle of the night certainly seems to be just around the corner. The militants have so established themselves and their agenda, that no one is safe who dares to take a different point of view.

We are all at risk now. Of course some people will not suffer in the least. Those cowardly and compromised Christians who urge us to just get along with, and accommodate ourselves to, the homosexual agenda, or the creeping sharia agenda, will not be in any trouble.

Their craven appeasement and capitulation will put them in good standing with the activists – at least temporarily. But when these militants really get into power, especially the Islamists, the first ones to lose their heads will be these “useful idiots,” as Lenin referred to them.

Friends, we are in a war. Every day the other side is getting further emboldened to carry out their fascist agendas. And all the while, most Christians are snoozing right through all this. They don’t seem to know and they don’t seem to care. And they have blood on their hands as a result.

Let me close with three words which came out of that great conflict between the Nazis and freedom. The first quote by Martin Niemoller, German pastor and Holocaust survivor, is well known:

The second speaks for itself:

I lived in Germany during the Nazi Holocaust. I considered myself a Christian. We heard stories of what was happening to the Jews, but we tried to distance ourselves from it, because, what could anyone do to stop it? A railroad track ran behind our small church and each Sunday morning we could hear the whistle in the distance and then the wheels coming over the tracks.
We became disturbed when we heard the cries coming from the train as it passed by. We realized that it was carrying Jews like cattle in the cars! Week after week the whistle would blow. We dreaded to hear the sound of those wheels because we knew that we could hear the cries of the Jews en route to a death camp. Their screams tormented us.
We knew the time the train was coming and when we heard the whistle blow we began singing hymns. By the time the train came past our church we were singing at the top of our voices. If we heard the screams, we sang more loudly and soon we heard them no more. Years have passed and no one talks about it anymore. But I still hear that train whistle in my sleep. God forgive me; forgive all of us who called ourselves Christians yet did nothing to intervene.

Finally, the words of the Lutheran pastor Dietrich Bonhoeffer who died in a Nazi prison camp: “Silence in the face of evil is itself evil: God will not hold us guiltless. Not to speak is to speak. Not to act is to act.”