OK, so let me get this straight. In the light of so many horrific and barbaric atrocities occurring overseas in the name of Islam recently, including home-grown Australians taking part, our Prime Minister makes a mild plea for all of us to be on the “same team”.

And he calls for changes to laws which will cut off dole payments to terrorists. Also, he says we need to stiffen our anti-terrorism laws to prevent Australians joining in overseas jihad, in part by making it an offence to travel to certain locations overseas.

As a result, there was a huge outpouring of support from the Islamic community, with numerous Muslim leaders publicly applauding the Prime Minister for his measured and sensible efforts to tackle the scourge of terrorism, and to make Australia a safer place. Yes the leaders came out in droves to sing his praises, as did tens of thousands of ordinary Muslims, all thankful for a wise and judicious leader like Mr. Abbott. 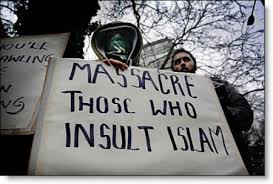 Indeed, we got the very opposite! Yes you heard me right. We did indeed get large numbers of Islamic leaders coming together to comment on this – but only to condemn it! Yes, the Muslim community – you know, the supposed majority of moderates out there – raised their voice, but only to condemn the Prime Minister and his very temperate proposals.

They actually made a public declaration of their disgust at Abbott’s efforts at curbing the sickening displays of barbarism we are now seeing on a daily basis from the Islamic State and other Islamic terrorist groups. Even more incredible is the fact that they issued this statement on the very day that IS posted a video showing the beheading of captured American journalist James Foley.

While the whole world is seeing how demonic the Islamic jihadists are, all our Muslim leaders can do here is condemn Abbott, instead of condemning these countless acts of pure evil. That tells us all we need to know really. Instead of banding together to issue a public statement condemning IS and all other terrorists operating in the name of Islam, they say nothing.

Instead, they come out and make a big stink about sensible measures to curtail terrorism! Go figure. This absolutely speaks volumes about where our Islamic community is at. Complete silence about major, daily acts of Islamic terror and bloodshed, but a very vocal condemnation of efforts to reduce it.

So how many leaders exactly signed this condemnation of Abbott and his sensible reforms? Five? Ten? Maybe 15? Nope. A full 80 names are there. Did you get that? We actually had 80 key Muslim leaders in Australia signing this document.

I would not have thought that we can have many more than 80 key Islamic leaders in this country. If so, then the great majority of Australian Islamic leaders and VIPs have all rejected this modest proposal, and have instead decided to push the agenda of Islam, rather than that of Australia.

And consider some of the absolute nonsense contained in the statement. It begins with these words: “We – the undersigned imams, activists, leaders, community organisations and student bodies of the Muslim community – denounce these proposals and the broader ‘war on terror’ regime within which they fit.”

Consider this paragraph: “The primary basis of these laws is a trumped up ‘threat’ from ‘radicalised’ Muslims returning from Iraq or Syria. There is no solid evidence to substantiate this threat. Rather, racist caricatures of Muslims as backwards, prone to violence and inherently problematic are being exploited. It is instructive that similar issues about Australian troops travelling abroad to fight or Jews travelling to train or fight with the Israeli Defence Force are simply never raised.”

“Trumped up”? “No solid evidence”? Um, I thought you guys were moderates who disapproved of violence and terror. Instead, you are trying to tell us that Islamic terrorism basically does not exist, and is just a beat-up by the kafir?! Denying that Islamic terrorism exists is hardly a reassuring way of showing your moderate credentials.

Let us get back to reality here. Simply consider one damning statistic. Since the September 11, 2001 Islamic terror attacks, we have had various other jihad attacks. So just how many have there been? I am glad you asked. To be precise, we have had 23,671 attacks committed by Muslims in the name of Islam in the past 13 years.

To break this down a bit, what do we find for the previous week? From August 9 – 15 there have been 40 jihad attacks and 3 suicide attacks, resulting in 1048 deaths and 348 critical injuries. That is one week my friends. Yet all our Australian Islamic leaders can tell us is that warnings about Islamic violence are “trumped up” and that this is all an exercise in “fear-mongering”.

Well I certainly am afraid all right. Nearly 24,000 jihadist attacks in 11 years! And did you get the rest of that remarkable claim? Australian troops and Israelis Defence Force troops are in the same camp! Yes, they routinely engage in suicide attacks, assaults on markets and schools, regularly engage in beheadings, and customarily proclaim death to unbelievers.

Yep, got that. So, condemn Abbott, and make excuses for the terrorists. And this from our “mainstream” Muslim community.

Um, so where are all these moderate Muslims? I am still waiting to discover them. Even a handful would do.

34 Replies to “What Moderate Muslims?”