With daily cases of infidels being beheaded by Muslims, it is worth asking whether this in fact is a Muslim thing, or simply an aberration. Western apologists for Islam like Obama and other dhimmi leaders will insist that this has nothing to do with the Muslim faith.

Indeed, it seems that just as we find gruesome examples of beheadings on a daily basis carried out by devout Muslims, so too we find daily denials by duped and deceived Western leaders that this has anything to do with Islam. Of course, failure to carefully identify the enemy is the first step to surrender and defeat. 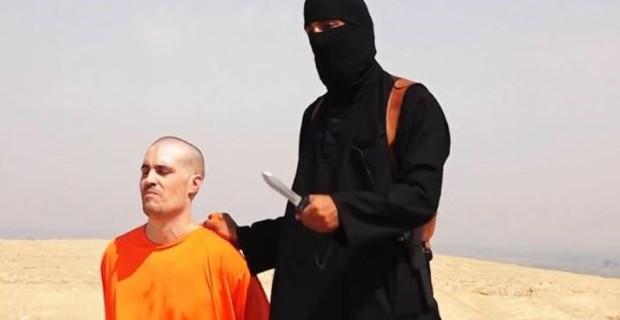 The truth is, the Koran has plenty of passages which speak to the need to slay the infidel. And some of these offer us more detail as to how this should be carried out. Here then are some of the more clear Koranic verses that dictate beheading kaffirs:

5:33: “The punishment of those who wage war against Allah and His Messenger, and strive with might and main for mischief through the land is: execution [by beheading], or crucifixion, or the cutting off of hands and feet from opposite sides, or exile from the land: that is their disgrace in this world, and a heavy punishment is theirs in the Hereafter.”
5:33: Those that make war against God and His apostle and spread disorder in the land shall be slain or crucified or have their hands and feet cut off on alternate sides…”

But commands for beheadings are certainly found in the Koran. As Douglas Murray comments:

Now a lot of Muslims in my experience do not know such verses are there – they are as ignorant of the actual details of the Qu’ran as many Christians are of the contents of the Bible. Others simply deny it is there because they are taught about God as all-loving and all-merciful and they would rather ignore or deny that the same God seems both quick to anger and somewhat bloodthirsty afterwards. The extremists, on the other hand, know it is there, often cite it and believe they are doing what Allah has instructed them to do when they perform such savageries.

But of course it is not just the Koran which can be cited here. The sira (the authorised biographies of Muhammad) and the hadith can also be mentioned. As to the sira, we find it clearly stated that Muhammad both practiced and approved of such activities. Islamic expert Dr. Andrew Bostom explains:

According to the biography of Prophet Muhammad by Ibn Ishaq, Prophet Muhammad himself sanctioned the massacre of the Qurayza, a vanquished Jewish tribe mercilessly. Thus some 600 to 900 men from the Qurayza were led on Muhammad’s order to the Market of Medina. Trenches were dug and the men were beheaded, and their decapitated corpses buried in the trenches while Muhammad watched in attendance. Women and children were sold into slavery, a number of them being distributed as gifts among Muhammad’s companions, and Muhammad chose one of the Qurayza women (Rayhana) for himself. The Qurayza’s property and other possessions (including weapons) were also divided up as additional “booty” among the Muslims, to support further jihad campaigns.
The classical Muslim jurist al-Mawardi (a Shafi’ite jurist, d. 1058) from Baghdad was a seminal, prolific scholar who lived during the so-called Islamic “Golden Age” of the Abbasid-Baghdadian Caliphate. He wrote the following, based on widely accepted interpretations of the Qur’an and Sunna (i.e., the recorded words and deeds of Muhammad), regarding infidel prisoners of jihad campaigns:
“As for the captives, the amir [ruler] has the choice of taking the most beneficial action of four possibilities: the first to put them to death by cutting their necks; the second, to enslave them and apply the laws of slavery regarding their sale and manumission; the third, to ransom them in exchange for goods or prisoners; and fourth, to show favor to them and pardon them. Indeed such odious “rules” were iterated by all four classical schools of Islamic jurisprudence, across the vast Muslim empire.

And the hadith also concur. One of the most reliable and widely accepted collections is that of Bukhari. Let me cite just one, from “Military Expeditions led by the Prophet” (Bukhari, Book 5, Volume 59, Hadith 632):

Narrated Abu Burda:
Then he (i.e. Muadh) pitched a tent and they started visiting each other. Once Muadh paid a visit to Abu Musa and saw a chained man. Muadh asked, “What is this?” Abu Musa said, “(He was) a Jew who embraced Islam and has now turned apostate.” Muadh said, “I will surely chop off his neck!”

Also, it is not just Muslim leaders from centuries ago justifying this. They are still doing it, even today:

In a recent article, jihadi cleric Hussein bin Mahmoud, a prominent writer on jihadi forums, expressed support for the beheading of American journalist James Foley by a member of the Islamic State (IS). Bin Mahmoud wrote that beheading was an effective way to terrorize the enemies of Islam, and stressed that, under Islamic law, Foley was a harbi, i.e. a non-Muslim whose life was not protected by an agreement of protection. He argued further that Islam allows and encourages such acts, since it is a religion of war and fighting.

And in case you think this is just some extremist, unrepresentative of Islam, see my final piece of evidence. This chilling video shows that so-called moderate and mainstream Muslims seem to fully support radicalism in the name of Islam, including gruesome punishment and the death penalty: www.jewsnews.co.il/2014/02/13/what-normal-muslims-think-the-video-that-should-horrify-you/

Beheading then is not the belief and activity of Islamic extremists. It is basic Islamic belief (and practice).

20 Replies to “Beheading and Islam”