Ignorance is bliss, or so we are told, and it seems we have truck-loads full of ignorance when it comes to the three items mentioned in my title. Most people know next to nothing about Islam, and that may well be true about many, if not most, Muslims as well. And most Westerners have never heard of taqiyya. And the mainstream media is loaded with ignorance, if not outright obfuscation and deception when it comes to Islam.

I have written on the Islamic doctrine of taqiyya elsewhere: billmuehlenberg.com/2013/07/03/islam-taqiyya-and-tv/

Simply put, taqiyya means that a Muslim can deliberately hide or conceal truth from the kafir in the interests of spreading Islam. Telling porkies for Muhammad (no pun intended), in other words, is the name of the game here. Thus it is morally permissible to lie for the cause of Islam. 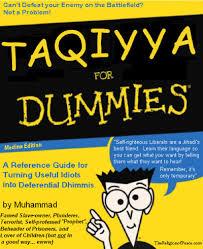 So when you have Muslim apologists waxing eloquent, you must always be aware of the possibility that they are lying to your face, seeking to pull a fast one over you in the name of Islam. We have had plenty of that just in the past 24 hours, both by Muslim activists and by Western dhimmi dupes.

The first comes from a fiery exchange last night on ABC’s Lateline. Now on most occasions I have absolutely nothing good to say about the ABC and its leftist PC activism which pervades everything it does. But a Muslim guest on last night was so bad that we were all actually cheering for the ABC host.

I refer to Emma Alberici’s attempt to interview Wassim Doureihi, the spokesman for the radical Islamic group Hizb ut-Tahrir. Both the video and the transcript can be found in my first link below. It is well worth watching the 11 1/2 minute slanging match.

Hizb ut-Tahrir is of course a hard core Islamic group seeking to establish sharia law in Australia. I have discussed them elsewhere: billmuehlenberg.com/2014/06/25/moderate-muslims-and-western-dupes/

For once, the ABC presenter actually sought to take it to an Islamic guest, instead of molly-coddling him. He refused to answer questions and spent the whole time saying Australia, America and the West are the real terrorists, not IS. The only time he got close to an answer was when he said, with lavish toppings of taqiyya:

“I come from a very clear point of view that as Muslims we have a fixed moral compass that says it’s unequivocally, under any conditions, it’s an aberration to kill innocent civilians.” Oh, well that sounds good, doesn’t it? Um, no. As I said, this is pure taqiyya in action.

What most people fail to realise is the use of equivocation by Muslims when they use certain words. For example, ‘peace’ for a Muslim has to do with everyone submitted to Allah and sharia law. There can be no peace as long as there are those who are not so submitted.

And the term ‘innocent’ is understood in the same sense. The infidel is never regarded as innocent. He is an enemy of Islam who must be converted, killed, or enslaved in dhimmitude. The Koran, haddith and sira all make it clear that the infidel is thus fair game.

Of course Emma Alberici would not have a clue about any of this, as would most other people. So we had a terrific example of taqiyya in action last night. But as I said, it is not just Muslim apologists who engage in this. The Western Islamophiles do exactly the same thing.

Thus in the nation’s most leftist, pro-Islam, and anti-Australian newspapers, the Age, and the Sydney Morning Herald, we had plenty of taqiyya in action today. Consider a column by Tom Allard, the National Affairs Editor at the Age. He asks, “Is Prime Minister’s anger at ‘hate preachers’ justified?”

Incredibly, he assures us that “Hizb ut Tahrir has condemned the terrorist group Islamic State and is overtly non-violent”. Wow, talk about a sucker born every day. Just as the militant Communists had front groups purporting to be “peaceful”, doing their every bidding, so Islam has its group in the West pushing the Islamic agenda.

This guy is utterly clueless as he spends his whole column actually defending Hizb ut Tahrir, while condemning Abbott for being paranoid and into conspiracy theories. Islamists are laughing it up as they sit back and let stooges like this do their work for them.

And then we also had this interesting piece in the Fairfax press; “Muslims warn anti-terror laws could prevent teaching from Koran”. The article opens:

A Muslim cleric who preaches from certain passages of the Koran could be caught in the “broad” net of the government’s new anti-terror law, Islamic leaders have warned. Grand Mufti of Australia Ibrahim Abu Mohammad and the Australian National Imams Council have called for the offence of “advocating terrorism” to be removed from the so-called Foreign Fighters Bill, currently before Parliament. They went public with their opposition on the same day Prime Minister Tony Abbott backed the draft legislation as essential to reining in “preachers of hate”, including the radical Islamic group Hizb ut-Tahrir.

OK, so let me get this straight. We have had Muslim groups telling us constantly that violence, bloodshed and killing have absolutely nothing to do with Islam. Um, if that is the case, then how can anti-terror laws be a threat to anyone involved in Koranic preaching and teaching?

The only way it can be a threat is if the Koran and hadith do indeed mandate and enjoin violent jihad, the slaughter of the infidels, and the rejection of Western freedoms and democracy. And that is exactly what the sacred books of Islam regularly, consistently and repeatedly teach.

So now the truth is starting to come out. Our “moderate” Muslim leaders do not want our anti-terror laws because they know they would go to the very heart and soul of Islamic teaching and practice. Talk about more taqiyya in action. Yikes.

Well, there you have it folks: our clueless media up to its ears in unhelpful Islamophilia, with the Muslim apologists getting away with murder as they apply generous amounts of taqiyya on whatever they say. No wonder they are winning and the West is losing.

13 Replies to “Islam, Taqiyya, and the Media”