I have already written up the details of the November 4 rout of the Democrats and the huge gains by the Republicans in the American mid-term elections: billmuehlenberg.com/2014/11/05/the-american-mid-term-elections/

But a number of other things can be added to my initial write-up, especially as the dust is now beginning to settle a bit. One key lesson from this election is that strong conservative candidates can win, and win handily, contrary to the official wisdom.

Far too many RINOs, establishment Republicans, and other pundits keep regurgitating the myth that for Republicans to win office, they must be compromising, middle-of-the-road appeasers. We are told they must ease up on contentious issues like abortion and they must finally accept things like homosexual marriage. 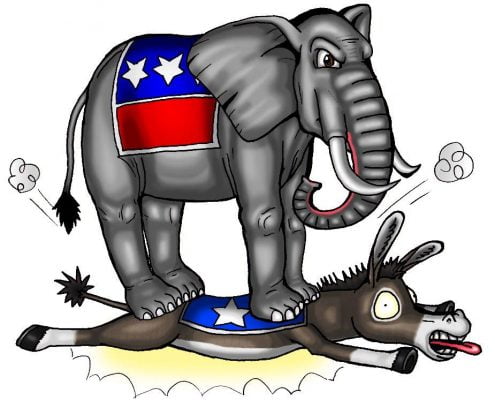 Well, that certainly was not the case the other day. Strong conservative, prolife and pro-family candidates won all over the place. And many of the losing Democrats were gung-ho pro-death and pro-homosexuality candidates. This was a massive victory for conservatism, the Tea Party, life and family values, and true Republican principles.

As to the issues of marriage and family, Brian Brown of the National Organization for Marriage put it this way:

Marriage won an overwhelming victory last night. In red states and blue, candidates who supported marriage as the union of one man and one woman won election and those who didn’t were rejected by voters. The Republican Party should take note that their nominees who favored gay ‘marriage’ were opposed by NOM and they were resoundingly defeated….
A major storyline emerging from the election was the rejection of Republican candidates who abandoned marriage and instead supported redefining marriage. NOM actively opposed Richard Tisei (MA6), Carl DeMaio (CA52) and Monica Wehby, the GOP candidate for US Senate in Oregon. Tisei and Wehby were defeated, and the outcome of the CA52 contest was too close to call on election night.
It’s time for the GOP elite and consultant class to wake up and realize that marriage is a winning issue, in red states and blue. Traditional marriage amendments have received 50 million votes across America, and candidates who embraced marriage this election won, while Republicans who rejected marriage were themselves rejected. The election results tonight were a stunning rebuke of those who wish to redefine marriage. We look forward to working with Congress to advance the cause of marriage.

In a landslide election that saw pro-life candidates winning across the nation, pro-life advocates have been able to take over the Senate from pro-abortion Democrats, led by Senate Majority Leader Harry Reid. Harry Reid’s days as the pro-abortion leader of the U.S. Senate are now numbered as pro-life candidates picked up enough seats to take over the Senate.
Reid has done pro-abortion President Barack Obama’s bidding and ensured that abortion-funding Obamacare was passed through on a party-line vote, with not a single Republican voting in favor of the legislation. Reid made sure that no pro-life bills received a vote in the Senate — including measures to stop taxpayer funding of abortions and a bill to ban abortions after 20 weeks, when unborn babies can feel pain….
With Republicans winning the Senate, pro-life advocates will have control of both the House and Senate and a real opportunity to pass pro-life bills or put pro-life language in must-pass legislation in a way that would force pro-abortion President Barack Obama to either sign the bills or veto them and face intense pro-life opposition.

This election was a rejection by the voters of both the Chamber of Commerce and Obama’s failed agenda. Every Republican candidate ran as a born-again conservative, and campaigned in opposition to Obama’s big-government policies. Once again, we see that when Republicans present a conservative alternative to the Democrats’ big-government policies, the voters reward them with a massive victory – just as they did in Reagan’s 1980 and 1984 Presidential victories, Gingrich’s 1994 Contract with America, and the Tea Party victories in 2010.
However, when Republicans present a ‘can’t we all get along, let’s compromise with Democrats and grow government’ face to the voters, they suffer big losses as they did in 2006, 2008 and 2012. Conservatives’ number one goal and objective is to save America by pressing politicians to return to limited, constitutional government, and yesterday the voters took a giant step in that direction by rejecting every one of President Obama’s policies which he said were in fact on the ballot.
The voters gave the Republican Party a mandate to do what is necessary to undo, obstruct and oppose all Obama’s efforts to ignore the Constitution and fundamentally change America. No Republican ran on a platform of cooperation, conciliation and compromise with President Obama. The Democrats (like some military leaders) made a huge mistake by campaigning on the issues of the last election: e.g., war on women, class warfare, and racial divide.
Republicans campaigned and won on the 2014 issues of: No Amnesty, protect our borders, national security, American exceptionalism, less government intrusion and regulations of our lives, free market policies of build the XL Pipeline, lower taxes, etc., etc.

Oh, and the Democrats are already imploding with recriminations and blame-game attacks. As but one example:

Sen. Harry Reid’s chief of staff openly criticized President Barack Obama, suggesting he was largely responsible for heavy Democratic losses in Tuesday’s midterm elections. “I don’t think that the political team at the White House truly was up to speed and up to par doing what needed to get done,” David Krone, Reid’s chief of staff, told the Washington Post in a story published late Tuesday.
Krone described a March 4 meeting in the Oval Office where Senate leaders pleaded with Obama to fundraise for an outside group, as well as transfer them millions in party funds, to help Democrats in the midterms. “We were never going to get on the same page,” he told the Post. “We were beating our heads against the wall.”
According to the Post, tension between Senate leaders and the White House extended beyond fundraising dollars. Democrats felt they were paying the price for Obama’s glitch-ridden rollout of HealthCare.gov, his handling of the Islamic State and, most recently, Ebola.
“The president’s approval rating is barely 40 percent,” Krone told the Post. “What else more is there to say? .?.?. He wasn’t going to play well in North Carolina or Iowa or New Hampshire. I’m sorry. It doesn’t mean that the message was bad, but sometimes the messenger isn’t good.”

Finally, Ann Coulter offers these as some of the highlights from Tuesday’s elections:

-A former House impeachment manager is now governor of Bill Clinton’s home state of Arkansas.
-The deep blue states of Maryland and Massachusetts will now have Republican governors.
-Republicans have just elected: the youngest member of Congress (Elise Stefanik of New York); the first black female representative from Utah (Mia Love); the first black senator from the South since Reconstruction (Tim Scott). The two black senators from the South before that were also Republicans, as was the first black senator from the North, Edward Brooke.
-Americans really don’t want drivers licenses for illegal aliens.
-Sandra Fluke lost.

Not a bad scorecard by any means. But as I said in my earlier article, these big wins do not mean that heaven has come to earth, or that the Kingdom has finally arrived. And it certainly does not mean that all those who care about this great nation can just roll over and go back to sleep. Much work remains to be done to consolidate some of these gains.

We still have not only Obama calling the shots for another two years, but we also have the entire well-entrenched cultural Marxist hegemony to contend with. And while politics is one thing, it is not everything as I keep repeating. This win may provide only a temporary respite in America’s seeming inevitable downward spiral.

This may well be the merciful hand of Almighty God at work, but politics alone will save no one and nothing. What America needs more than anything else at the moment is glorious Spirit-sent revival, repentance and renewal. Without that America is still toast, and this helpful reprieve will be just that – only a reprieve, with judgment still coming – and long overdue.

6 Replies to “Lessons From the Mid-Term Elections”