This leftist poster was meant to highlight some supposed glaring and unfair inequality. Since this person asked me what I thought, I said this: “Apples and oranges. The US does have a much lower minimum wage. But many if not most things are also far cheaper in the US, from cars to most foods to (importantly!) books, etc. So this is a quite misleading and mischievous post. And there are solid reasons to argue that raising the minimum wage actually hurts people – especially the poor.” 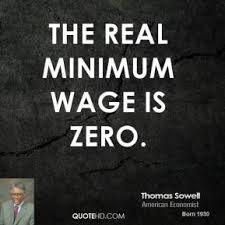 So let me here offer some of those reasons. Plenty of experts can be appealed to in this regard, so let them speak. And let me begin with four voices you would expect to argue for a higher minimum wage: three Black Americans and one Spanish American. They all argue against this.

One of the simplest and most fundamental economic principles is that people tend to buy more when the price is lower and less when the price is higher. Yet advocates of minimum wage laws seem to think that the government can raise the price of labor without reducing the amount of labor that will be hired. When you turn from economic principles to hard facts, the case against minimum wage laws is even stronger. Countries with minimum wage laws almost invariably have higher rates of unemployment than countries without minimum wage laws. Most nations today have minimum wage laws, but they have not always had them. Unemployment rates have been very much lower in places and times when there were no minimum wage laws….
In European welfare states where minimum wages, and mandated job benefits to be paid for by employers, are more generous than in the United States, unemployment rates for younger workers are often 20 percent or higher, even when there is no recession. Unemployed young people lose not only the pay they could have earned but, at least equally important, the work experience that would enable them to earn higher rates of pay later on.
Minorities, like young people, can also be priced out of jobs. In the United States, the last year in which the black unemployment rate was lower than the white unemployment rate – 1930 – was also the last year when there was no federal minimum wage law. Inflation in the 1940s raised the pay of even unskilled workers above the minimum wage set in 1938. Economically, it was the same as if there were no minimum wage law by the late 1940s. In 1948 the unemployment rate of black 16-year-old and 17-year-old males was 9.4 percent. This was a fraction of what it would become in even the most prosperous years from 1958 on, as the minimum wage was raised repeatedly to keep up with inflation. Some “compassion” for “the poor”!

The idea that minimum wage legislation is an anti-poverty tool is simply sheer nonsense. Were it an anti-poverty weapon, we might save loads of foreign aid expenditures simply by advising legislators in the world’s poorest countries, such as Haiti, Bangladesh and Ethiopia, to legislate higher minimum wages. Even applied to the United States, there’s little evidence suggesting that increases in the minimum wage help the poor. Plus, according to the Bureau of Labor Statistics, only 2.2 percent of working adults earn the minimum wage.
The crucial question for any policy is not what are its intentions but what are its effects? One of its effects is readily seen by putting yourself in the place of an employer and asking: If I must pay $6.25 or $7.25 an hour to whomever I hire, does it make sense for me to hire a worker whose skills enable him to produce only $4.00 worth of value per hour? Most employers would view doing so as a losing economic proposition. Thus, one effect of minimum wages is that of discriminating against the employment of low-skilled workers. For the most part, teenagers dominate the low-skilled worker category. They lack the maturity, skills and experience of adults. Black teenagers not only share those characteristics, but they are additionally burdened by grossly fraudulent education, making them even lower skilled.

Just because you worked at McDonalds for minimum wage after school didn’t mean that you expected to work there for the rest of your life. Back then, after graduating from high school, you might enter trade school, join the military, or start a business. If your family had the money, you might go to college. Regardless of how wealthy or poor your parents were, no one expected you to keep the same job you had in high school and somehow be able to support a family of four on the wages.
Paying one’s dues by holding a low-paying job offered many benefits for both middle class and working class young people. It taught them how to show up to work on time and how to be respectful and professional to a boss, coworkers and customers. It gave them a chance to prove they could be reliable and to obtain valuable character references for the future. It also motivated individuals to see the value in learning specialized skills, whether they did that through college or through some other option.

In an article in Forbes magazine, contributor William Dunkelberg claims that raising the minimum wage to $7.25 in 2009 cost some 600,000 minimum wage jobs to the total economy. That was with a wage increase of just 10 percent.
Raising the wage from its current level to $10 per hour would represent an increase of just shy of three dollars an hour or around 40 percent. If Mr. Dunkelberg’s numbers are correct, that would cost an additional 2.4 million jobs. Let’s dial back the rhetoric just a bit.
A study by Texas A&M University says that an increase of 10 percent for the minimum wage resulted in a 25 percent reduction in job growth. That is the number we should concern ourselves with. Forget the increase in the cost of doing business; forget the nearly automatic follow-on increase in cost to the consumer; forget that the extra money could very well be worth less than the current minimum wage because of the increase in prices. Any increase in minimum wage is sold as a way of helping poor workers get a bigger piece of the pie. However, how can increasing the minimum wage help the unemployed if there are fewer jobs for them to apply for in the future?

And a few words from Ed Feulner:

Many of today’s entrepreneurs and success stories began their careers in very humble employment circumstances. “Actress Patricia Richardson, star of the ABC sitcom ‘Home Improvement,’ scrubbed bathroom floors and toilets in a hotel,” notes Policy Review. “Telecommunications executive John J. Sie worked on the assembly line of a stapler factory. Ivan Seidenberg, the chairman and CEO of NYNEX, was a janitor.”
Not everyone rises to the top, of course, but entry-level jobs such as these — the same kind that will be in shorter supply if the minimum wage is hiked precipitously — have helped millions of Americans (most of whom are between the ages of 16 and 24 and work part time) learn the basic skills needed to succeed in any field: Show up on time. Look neat. Be courteous. Most of all, work hard.
Wendy’s founder Dave Thomas is among those who learned those lessons firsthand. He started off working in a diner owned by two Greek immigrant brothers. “They taught me the importance of being polite and of praising people for a job well done,” Thomas said. “From them I learned that if you work hard and apply yourself, you succeed. It’s really not that complicated.” However, if the politicians who want to jack up the minimum wage get their way, things are about to become a whole lot more complicated, both for workers and the economy.
Worse, says Heritage labor expert James Sherk, the minimum wage has already been hiked to more than $10 an hour, at least in effect. Why? Because of Obamacare’s mandate that employers provide “qualifying” health coverage or be penalized. Once the mandate kicks in in 2015, hiring costs will go up still more for employers. Low-paying jobs have given millions of Americans with no work skills the opportunity to step on the ladder of success, where they can rapidly advance to higher-paying jobs. Why cut off the bottom rung by hiking the minimum wage so dramatically?

Finally, Senator David Leyonhjelm of the Liberal Democrats (whose libertarian cultural and social views I often disagree with) says this about the Australian scene:

Other studies have shown that most people on low wages move on to higher wages after about a year. This shows that low wage jobs are an opportunity for people to start at a bottom rung and work up. The problem is, Australia’s regulated minimum wage is so high that many cannot even reach the bottom rung and begin to climb.
In fact, Australia’s minimum wage is one of the highest in the world. Australians start paying income tax once their annual income exceeds $18,200, but they are not allowed to get a full time job unless it pays more than $32,000 a year. In the OECD, only Luxembourg and France have a higher minimum wage. The minimum wage in both New Zealand and the UK is 84 per cent of ours; Canada’s is 78 per cent, Japan’s 58 per cent and South Korea’s 42 per cent. Other countries with which we might compare ourselves, including Austria, Germany, Finland, Sweden, Switzerland, Italy and Singapore, have no minimum wage at all….
Australia’s minimum wage runs counter to the Australian credo of giving everyone a fair go. It is time sensible voices in the Parliament agreed to help the underdog by removing the barriers that prevent them from getting a job and improving their lives.

All the facts, evidence and hard data seem to suggest that raising the minimum wage actually harms the very people that were meant to be helped. Once again, the left puts good intentions and emotions over reality. If good intentions end up actually hurting people, then it is time to scrap those good intentions.

16 Replies to “On the Minimum Wage”