We expect those pushing radical agendas like the various sexual libertines, especially the homosexual lobby, to try their best to attack and twist Scripture as they seek to rationalise their sordid behaviours. Thus those calling for things like homosexual marriage and polyamory will try to claim that ‘the Bible fully supports polygamy, so what is the big deal?’

And incredibly some rather clueless and undiscerning Christians will sometimes even run with this silliness. I have had a few folks recently claiming to be Christians throwing this baloney my way, and I wasted no time in setting them straight.

So it seems an entire article is in order to deal with these nonsensical claims. So here it is. The first thing to be said is that one man, one woman, monogamous marriage has always been God’s normative ideal from Genesis to Revelation. We get it stated clearly way back in Gen. 2:24: “For this reason a man shall leave his father and his mother, and be joined to his wife; and they shall become one flesh.”

Jesus of course fully embraces and affirms this core biblical truth. In Matthew 19:4 we find Jesus appealing to this very passage when he says:

“Haven’t you read,” he replied, “that at the beginning the Creator ‘made them male and female,’ and said, ‘For this reason a man will leave his father and mother and be united to his wife, and the two will become one flesh’? So they are no longer two, but one flesh. Therefore what God has joined together, let no one separate.”

We find the same in Mark 10:6-8. Paul affirms this when he says that part of the qualification of a church leader is that he be the husband of one wife (e.g., 1 Timothy 3:2). More importantly, the husband-wife marriage relationship is an important image of an even greater relationship: that of Christ and the church. As Paul says in Ephesians 5:25-28:

Husbands, love your wives, just as Christ loved the church and gave himself up for her to make her holy, cleansing her by the washing with water through the word, and to present her to himself as a radiant church, without stain or wrinkle or any other blemish, but holy and blameless. In this same way, husbands ought to love their wives as their own bodies. He who loves his wife loves himself.

And the climax of human history is of course the wedding of the Lamb and his Bride as Revelation 21 speaks about. Monogamous marriage has always been God’s plan for human sexuality – indeed, it is the only acceptable form of sexuality promoted throughout the Bible. 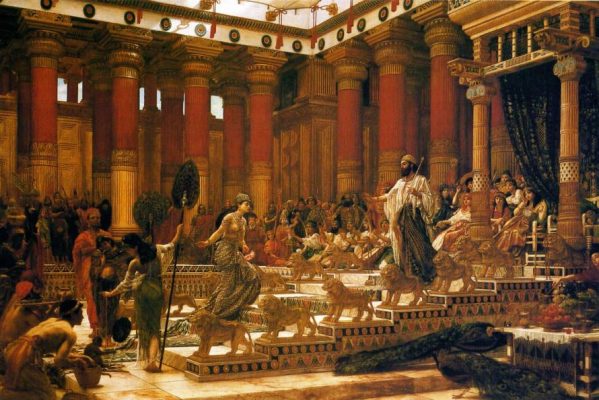 Because of the hardness of men’s hearts, less than ideal circumstances were sometimes allowed to proceed. But Scripture is also quite clear as it warns about such situations. Indeed, it directly warns against polygamy in places like Deuteronomy 17:17 where we find this said about future kings: “He must not take many wives, or his heart will be led astray.”

And this is just what happened to the likes of King Solomon. The OT makes it clear that there were very real consequences of his polygamy. This is shown time and time again, and the strong words applied to Solomon are true of all the others: “As Solomon grew old, his wives turned his heart after other gods, and his heart was not fully devoted to the Lord his God” (1 Kings 11:4).

All of 1 Kings is worth reading here. His sinful polygamy led to even more sins: illicit political alliances and then polytheism. While it was customary in the Ancient Near East for kings to have many wives, Solomon should have known better. As Philip Graham Ryken remarks:

Solomon was guilty of more than sexual sin, however. The mention of “princesses” is a clear indication that many of these marriages represented political alliances. By marrying the daughters of foreign kings, Solomon was practicing politics, lusting after power as well as sex. These women came from the very nations that God told Israel to drive out of the Promised Land. Yet Solomon foolishly joined forces with them through covenant matrimony. Even worse, the king began to worship their gods.

Deuteronomy 7:2-4 had explicitly warned about this very thing:

When the Lord your God delivers them before you and you defeat them, then you shall utterly destroy them. You shall make no covenant with them and show no favour to them. Furthermore, you shall not intermarry with them; you shall not give your daughters to their sons, nor shall you take their daughters for your sons. For they will turn your sons away from following Me to serve other gods; then the anger of the Lord will be kindled against you and He will quickly destroy you.

As August Konkel remarks, “Though these relationships may have begun as a matter of political expediency, the end result is the catastrophe Deuteronomy warned would happen.” And it really should go without saying that just because the Bible describes something does not mean that it prescribes it. There are many sinful activities described in the OT, including the covetousness, adultery, and murder committed by King David.

The fact that three of the ten commandments were broken by David and described in some detail (see 2 Samuel 11) does not of course mean that this was in any way prescriptive behaviour. Quite the opposite, as we find when Nathan so very strongly condemns David for what he has done (2 Sam. 12).

Nathan then said to David, “You are the man! Thus says the Lord God of Israel, ‘It is I who anointed you king over Israel and it is I who delivered you from the hand of Saul. I also gave you your master’s house and your master’s wives into your care, and I gave you the house of Israel and Judah; and if that had been too little, I would have added to you many more things like these! Why have you despised the word of the Lord by doing evil in His sight?

But as Walter Kaiser comments, this passage and a few others “conceivably could be construed as giving temporary permission from God to override the general law of marriage found in Gen. 2:24. . . . But each one falls far short of proving that anything like divine permission was being granted in these passages.”

He continues, “Scripture does not always pause to state the obvious. In many cases there is no need for the reader to imagine what God thinks of such states of affairs, for the misfortune and strife that come into the domestic lives of these polygamists cannot be read as a sign of divine approval.”

Polygamy was never established by God for any people under any circumstances. In fact, the Bible reveals that God severely punished those who practiced it, as is evidenced by the following: (1) Polygamy is first mentioned in the context of a sinful society in rebellion against God where the murderer “Lamech took for himself two wives” (Gen. 4:19, 23). (2) God repeatedly warned polygamists of the consequences of their actions “lest his heart turn away” from God (Deut. 17:17; cf.1 Kings 11:2). (3) God never commanded polygamy – like divorce, He only permitted it because of the hardness of their hearts (Deut. 24:1; Matt. 19:8). (4) Every polygamist in the Bible, including David and Solomon (1 Chron. 14:3), paid dearly for his sins. (5) God hates polygamy, as He hates divorce, since it destroys His ideal for the family (cf. Mal. 2:16).

In short, the Bible is clear that individuals in the history of Israel who abandoned God’s design of monogamy and participated in polygamy did so contrary to the Creator’s plan and ultimately to their own detriment. The sin and disorder produced by polygamy, then, is further testimony to the goodness of God’s monogamous design of marriage as first revealed in the marriage of Adam and Eve in the Garden of Eden.

So we have no reason whatsoever to affirm anything other than monogamous, heterosexual marriage as the only divinely-sanctioned form of human sexuality. Those seeking to make the case for polygamy from the Bible simply are left standing on shaky ground.

4 Replies to “Polygamy and Scripture”