OK, so let me restate a few obvious truths first. At the end of the day, a good Republican President is not going to save America. No one can save America but the one who came to earth two thousand years ago who was ‘despised and rejected by men’.

And until Americans – and primarily American Christians – repent on their faces before a holy and almighty God, the days of the US will soon be over. The US is now a moral and spiritual cesspool, and nothing but divine intervention can save it.

Having said that, I do believe politics is important, and I do believe that getting good and godly leadership can make a real difference. A good conservative POTUS will not usher in the Kingdom, but he or she will at least stop the rot for a while – and that is important.

As Martin Luther King Jr. said about the use of law: “It may be true that the law cannot make a man love me, but it can keep him from lynching me, and I think that’s pretty important.” And again: “Morality cannot be legislated but behaviour can be regulated. Judicial decrees may not change the heart, but they can restrain the heartless.”

So good laws are important as is good governance. God created the state and he expects us to use it to restrain evil and promote that which is good. Thus the person who becomes the next President of the United States is a very important matter indeed.

I for one take a keen interest in the US Presidential election of 2016, and all that is leading up to it. There are some good men running for the Republican nomination, and we saw a lot to like in yesterday’s debates. Let me offer a few quick thoughts on this.

I must confess I did not see the full debates (I gotta get FoxTel, and quick). But I did see around 50 of the shorter video clips from both debates, and we have the full transcripts of both debates. For those not in the know about these matters, there were two debates featuring all 17 candidates. 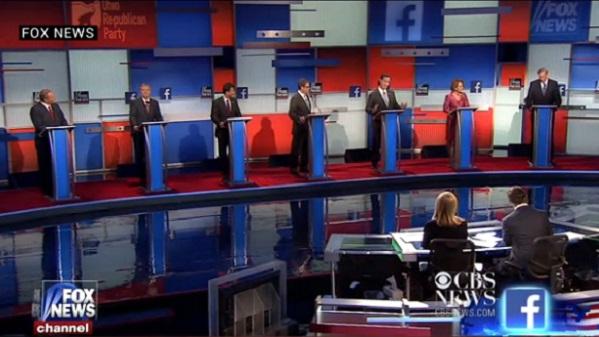 The first one featured seven of the lesser lights – those who have not been doing as well in the polling. Those seven were:

In the first debate there were some good moments by most of the candidates. One of them showed yet again why he should not be running for POTUS. I refer to pro-choice Pataki who said, “My heart has not changed, because I’ve always been appalled by abortion. I’m a Catholic, I believe life begins at conception. But as Bill said earlier, Roe v. Wade has been the law for 42 years, and I don’t think we should continue to try to change it.”

Oh puh-leeese. He might as well have said – if he lived a few centuries ago – that he is anti-slavery, but there is no point in going for abolition, and trying to change the laws on slavery. In marked contrast was Bobby Jindal:

Planned Parenthood had better hope that Hillary Clinton wins this election, because I guarantee under President Jindal, January 2017, the Department of Justice and the IRS and everybody else that we can send from the federal government will be going in to Planned Parenthood.
This is absolutely disgusting, and revolts the conscience of the nation. Absolutely, we need to defund Planned Parenthood. In my own state, for example, we launched an investigation, asked the FBI to cooperate. We just, earlier this week, kicked them out of Medicaid in Louisiana as well, canceled their provider contract.

Jindal is one of my favourite and most consistent conservatives, and he handled himself very well. It would be nice to see him in the top ten. But by every account, Carly Fiorina did exceedingly well. She was the clear winner of the first debate, and certainly belongs in the top tier.

Hillary Clinton lies about Benghazi, she lies about e- mails. She is still defending Planned Parenthood, and she is still her party’s frontrunner. 2016 is going to be a fight between conservatism, and a Democrat party that is undermining the very character of this nation. We need a nominee who is going to throw every punch, not pull punches, and someone who cannot stumble before he even gets into the ring.
I am not a member of the political class. I am a conservative; I can win this job, I can do this job, I need your help, I need your support. I will, with your help and support, lead the resurgence of this great nation. Thank you. 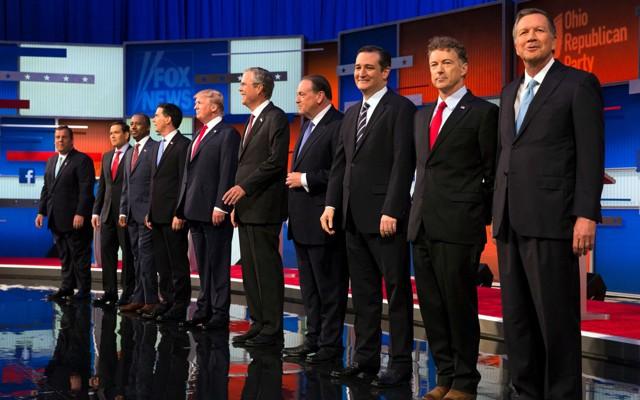 The main debate of course is where the real action was. Let me offer a few highs and lows. A quick low to deal with and move on from was John Kasich who repeated his claim that now that we have legalised homosexual marriage, we must just accept it. We don’t need wimps like this seeking the Republican nomination.

On the issue of abortion Walker remained strong on his pro-life stance: “Unlike Hillary Clinton, who has a radical position in terms of support for Planned Parenthood, I defunded Planned Parenthood more than four years ago, long before any of these videos came out…”

Trump said he has evolved on the issue, and is now against it:

I’ve evolved on many issues over the years. And you know who else has? Ronald Reagan evolved on many issues. And I am pro-life. And if you look at the question, I was in business. They asked me a question as to pro-life or choice. And I said if you let it run, that I hate the concept of abortion. I hate the concept of abortion. And then since then, I’ve very much evolved. And what happened is friends of mine years ago were going to have a child, and it was going to be aborted. And it wasn’t aborted. And that child today is a total superstar, a great, great child. And I saw that. And I saw other instances. And I am very, very proud to say that I am pro-life.

What I have advocated is that we pass law in this country that says all human life at every stage of its development is worthy of protection. In fact, I think that law already exists. It is called the Constitution of the United States.
And let me go further. I believe that every single human being is entitled to the protection of our laws, whether they can vote or not. Whether they can speak or not. Whether they can hire a lawyer or not. Whether they have a birth certificate or not. And I think future generations will look back at this history of our country and call us barbarians for murdering millions of babies who we never gave them a chance to live.

I think the next president ought to invoke the Fifth, and Fourteenth Amendments to the constitution now that we clearly know that that baby inside the mother’s womb is a person at the moment of conception.
The reason we know that it is is because of the DNA schedule that we now have clear scientific evidence on. And, this notion that we just continue to ignore the personhood of the individual is a violation of that unborn child’s Fifth and 14th Amendment rights for due process and equal protection under the law.
It’s time that we recognize the Supreme Court is not the supreme being, and we change the policy to be pro-life and protect children instead of rip up their body parts and sell them like they’re parts to a Buick.

On the issue of religion and politics, one of the best lines of the night went to Cruz. Megyn Kelly used a FB question: “I want to know if any of them have received a word from God on what they should do and take care of first.” This was another gotcha question from Kelly (and plenty of conservatives were quite unhappy about her performance) but Ted was up to the task:

KELLY: Senator Cruz, start from you. Any word from God?
CRUZ: Well, I am blessed to receive a word from God every day in receiving the scriptures and reading the scriptures. And God speaks through the Bible.
(APPLAUSE)
CRUZ: I’m the son of a pastor and evangelist and I’ve described many times how my father, when I was a child, was an alcoholic. He was not a Christian. And my father left my mother and left me when I was just three years old.
And someone invited him to Clay Road Baptist Church. And he gave his heart to Jesus and it turned him around. And he got on a plane and he flew back to my mother and me.

Rubio did well in answering the same question (and got a good laugh as well): “Well, first, let me say I think God has blessed us. He has blessed the Republican Party with some very good candidates. The Democrats can’t even find one.”

Carson did real good on a question about God and race:

Well, I think the bully pulpit is a wonderful place to start healing that divide. You know, we have the purveyors of hatred who take every single incident between people of two races and try to make a race war out of it, and drive wedges into people. And this does not need to be done.
What we need to think about instead – you know, I was asked by an NPR reporter once, why don’t I talk about race that often. I said it’s because I’m a neurosurgeon. And she thought that was a strange response. And you say – I said, you see, when I take someone to the operating room, I’m actually operating on the thing that makes them who they are. The skin doesn’t make them who they are. The hair doesn’t make them who they are. And it’s time for us to move beyond that.

As to the closing remarks, we had a few real winners. Trump gave a strong response:

And Ted Cruz showed again why he is the man:

So who is my Republican POTUS dream team for next year? While there are some folks I would love to see there, I know they will likely not make it. So dealing with those who do have a chance to make it to the top five or so, I would be more than happy to have one or the other of these two options for Pres and VP:

It is early days yet with 16 months to go before the election. But we can work and pray for the better options to make it for the Republican choice.

14 Replies to “On the Republican Presidential Debates”