If you went by the mainstream media version of events, there is only one truth out there: homosexual marriage is a must, and children do not need a mother and a father. The militants in the homosexual lobby and all their willing groupies in the MSM sing from this page incessantly.

It is THE party line, and no one must divert from it. The activists and their media supporters know full well how propaganda and indoctrination works: just keep saying the same thing over and over again, while censoring out all contrary points of view.

It seems they have learned well the lessons of past experts in the manipulation of information. It was Joseph Goebbels, Hitler’s propaganda minister, who once said, “If you tell any lie long enough, often enough, and loud enough, people will come to believe it.”

And that is exactly how truth is crucified and radical agendas are implemented. Keep the party line going at all costs, and refuse to run with any alternative points of view. We find this all the time in most Western media outlets. They are propagandists for all things homosexual. If, by some minor miracle, a contrary point of view is heard, it is as rare as it is remarkable.

An example of this occurred last night, and I almost fell out of my chair when I came across it. And it happened on the ABC no less. My only guess is they have been taking so much heat for their obvious secular left bias that they felt the need to offer a token view that differs from their own. 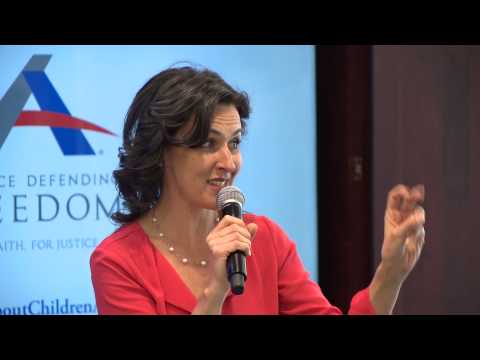 I guess they think if they actually allow a conservative voice on, maybe once every few months, that will allow them to claim that they are balanced and fair. Anyway, back to last night’s shocker. Katy Faust, who was raised by lesbians, and opposes homosexual marriage, was actually allowed onto Lateline last night.

She has an incredible story to tell, and her articles in defence of heterosexual marriage and the rights of children to be raised by their own mother and father are superb. She even gave expert testimony to the Supreme Court before its recent marriage decision. I discuss her in more detail here: billmuehlenberg.com/2015/02/03/homosexual-marriage-listen-to-the-children/

She is here in Australia to speak on behalf of marriage and managed to get on to Tony Jones’ program last night. Of course because she has been there and done that, she was hard to pin down by the lefty, pro-homosexual host. Indeed, she gave rock solid answers so she could not be gainsaid.

So Jones had to play the religion card – once again – trying to undermine her testimony by implying she is merely a religious bigot. But that did not work, as Katy handily answered him:

TONY JONES: Now Katy, did you find God somewhere in this journey towards anti-gay marriage?

KATY FAUST: Well, I was not raised a Christian, but I did become a Christian in high school.

TONY JONES: And did that change things? I mean, did you decide that homosexuality was against the Scriptures, against God’s will, something of that nature?

KATY FAUST: Well, I – it took a long time, honestly, for me to get on board with what biblical sexuality says, because there’s a very fierce protectiveness I think that all children have for their parents, but what I was delighted to find when I read Scripture is that God has an incredible heart for the orphan and that he’s very concerned with the plight of children. And that lines up very much with where we need to go in this discussion, which is focusing on the rights of children primarily as opposed to emphasising the desires of adults, which tend to take centre stage when we’re talking about this issue.

The entire seven minute video is well worth watching. Let me offer a few highlights from the transcript:

TONY JONES: Now how is it that the daughter of lesbian mothers has become a leading opponent of gay marriage? How does that work?

KATY FAUST: Simply because I recognised that while my mother was a fantastic mother and most of what I do well as a mother myself I do because that’s how she parented me, she can’t be a father. Her partner, an incredible woman – both of these women have my heart – cannot be a father either. Children have a right to be in relationship with their mother and father whenever possible, and as a society, we shouldn’t normalise a family structure that requires children to lose one or both parents to be in that household.

TONY JONES: Now trying to sway the US Supreme Court to rule against gay marriage, you wrote to Justice Anthony Kennedy before that vote and you said you used to say, “I’m happy my parents got divorced so I could get to know all you wonderful women.” Now you seemed to be saying that was all a lie.

KATY FAUST: Well, there’s a lot of pressure on children of gay parents to please their parents, to sort of carry the banner forward for them and you can read about this not just in conservative publications, but even books like Families Like Mine, which was publicised by a pro-gay marriage daughter of gays and she admitted and several of the kids in that book admitted that it’s very difficult to be honest about this because of the political pressure surrounding this topic. There’s several children that have contacted me even since I started writing about this saying, “I agree with you, but I’ll never come out and speak about this publicly because my relationship with my parent is too tenuous.”

TONY JONES: Now after your parents divorced, because you originally had a father and a mother. They divorced. Your father, you say, went off with other women. Why have you focused your main criticism on the homosexual part of the equation and not your father?

KATY FAUST: Well, I think that I’m pretty fair in my statements to say that whether you’re heterosexual or homosexual, children have rights. And adults – the onus needs to be on adults to conform to the rights of children rather than children fitting into an adult’s lifestyle. And certainly, I don’t think that homosexuals are responsible by any means for the crisis that we face in America when it comes to family structure these days. Absolutely, heterosexuals have led the way on that charge. I got into this discussion primarily because what I heard from the gay lobby was that children don’t care who’s raising them, right? That children are just fine if it’s two men or two women. And the reality is that anybody that’s talked to a child who has lost a parent, whether through divorce, abandonment, third-party reproduction or death, kids absolutely care. Family structure matters to children. And so I heard the LBGT lobby saying it doesn’t care – they don’t care and I don’t think that that’s reality.

As I say, have a listen to the entire interview. Faust was terrific and Jones was left wondering what he got himself into. Check it out, since this may well be a once-off from the ABC. And as I also say, trying to get a bit of truth into the MSM is a herculean task.

It somehow managed to take place last night, but recall what we are up against. The ABC has already featured hundreds, probably thousands, of pro-homosexual stories not just on Lateline, but on so many of its programs. To get one competing story does not even come close to offsetting all those.

The truth is, there are many who have made a cogent case for traditional marriage and the need for children to have a mum and a dad – even in secular language. Yet most of these folks never get a hearing from the MSM. I for example have written three books and hundreds of articles in which I seek to make the non-religious case for heterosexual marriage.

Many others have as well. But the MSM simply ignores and censors all that. Yet they have the gall to claim we are obsessed with homosexuality. Um, no, it is them who are obsessed. I especially like how US presidential candidate Ted Cruz recently answered a hostile reporter on these matters:

REPORTER: Do you have a personal animosity against gay Americans?
CRUZ: Do you have a personal animosity against Christians sir? Your line of questioning is highly curious. You seem fixated on a particular subject. Look, I’m a Christian. Scripture commands us to love everybody and what I have been talking about, with respect to same-sex marriage, is the Constitution which is what we should all be focused on. The Constitution gives marriage to elected state legislators. It doesn’t give the power of marriage to a president, or to unelected judges to tear down the decisions enacted by democratically elected state legislatures.

I am so thankful for people like Ted Cruz and Katy Faust. We need more like them. They are brave enough to stand against the homosexual/media juggernaut and speak truth, wherever they can. We need to share their words far and wide.

Thank you Katy for coming to Australia and being a brave warrior for truth, for marriage, and for our children. We salute you.

12 Replies to “Speaking Truth on Homosexual Marriage and Parenting”