When a culture becomes so hardened and desensitised to horrendous evil, then you know it is in a terminal condition. We see this everywhere with our sex-obsessed culture and our culture of death. And both go together. A recent article in a major Australian newspaper offers us a sad example of all this.

Tourists often flock to Australia to see the various sights on offer, be it the Sydney Opera House or Ayers Rock. And Australians will go interstate to see things like the Great Barrier Reef or the Sydney Harbour Bridge. Sadly there are other sorts of tourism, such as the sordid sex tourism industry.

And in the article under question, we now read of abortion tourism. Yes, people will travel great distances to actually kill their own babies. This is how this gruesome piece begins:

Australia’s abortion laws are inconsistent and failing to keep up with modern medical practices. Scores of women are flying into Victoria to have late-term abortions each year because of prohibitive laws in other states and territories.
The demand for the controversial procedure is so great in Melbourne that the main service is flying doctors in from South Australia because there is a shortage of doctors trained and willing to do it in Victoria.
Marie Stopes International, the only private organisation that provides terminations for women 20-24 weeks pregnant in Victoria, said about 46 per cent of these procedures were done for interstate women.
The group declined to say how many it performed each year, but a spokeswoman said there were “scores” of women coming in from interstate. Some public hospitals also perform late-term abortions in Victoria, but the department of health does not publish data on it.
Professor of Obstetrics and Gynaecology at James Cook University Caroline De Costa said inconsistent and inadequate state-based laws were driving “abortion tourism” in Australia, mainly to Victoria and overseas and has called for urgent legislative reform. She said hundreds of women were likely to be travelling for the procedure each year.

I am not sure which is worse: the subject of this piece or the cavalier way it is reported. It is as if we are reading about going to Australia to see a football game at the MCG or view the Twelve Apostles. Such a matter of fact reporting: ‘Hey, let’s go to Australia to see some kangaroos, visit the Gold Coast, and oh yeah, have an abortion.’

And since every state does not have the baby butchering business fully available to the max, let’s just change even more laws and have even more open slather here. Sin always hardens us, and gross sin, unchecked and repented of, will always lead to a deadness of mind and spirit. That certainly seems to be the case here.

All this reaffirms for me that I was right to write a new book on these matters. The Challenge of Abortion – the first of three books in my bioethics series – is now just out. In it I challenge the many lies and falsehoods which our society have bought about abortion.

I offer medical, scientific, philosophical and social data to challenge these myths, and in the second half of the book I examine the biblical and theological material. My very last words of this second section focus on the practice of child sacrifice in the Ancient Near East. 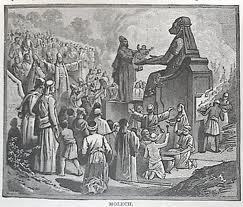 After a discussion of how both the pagan nations and ancient Israel were involved in this, I seek to make application for today. I concluded with these words:

Sexual immorality and the shedding of innocent blood were among the main sins being indulged in back in Old Testament times. They usually went hand in hand. How much more accurate can we describe the situation today, where so often it is sexual immorality which leads to the abortion mill? The close connection between the two is just as pronounced today as it was back then.

God judged Canaan for these horrible practices, but then had to punish Israel as well for doing the same thing. The only sensible question to therefore ask is this: when will God judge the West for doing similar things? God hated such practices back then and he had to act. At some point he will have to act again.

While we may not be appeasing actual fertility gods today, we certainly are appeasing other modern gods, not all that dissimilar really: a woman’s right to choose, career paths, convenience, lifestyle choices, unrestricted promiscuity, and so on. We as a culture seem to be just as immoral and idolatrous as the Canaanites were. We seem to be just as much involved in sexual promiscuity, perversion and the shedding of innocent blood. These sins so often go together.

If God had to act against the Canaanites, does he not also need to act against our own culture? Have we not provoked the wrath of God as much as the Canaanites and ancient Israel did? Our only response can be repentance and then obedience. We need to wake up to the tragedy of abortion, and seek God’s heart over it. If not, certain judgment surely awaits.

Let me close this section with some incisive words by American pastor John Anderson. Back in 1984 he wrote the book, Cry of the Innocents: Abortion and the Race Towards Judgment. In it he mentioned the ancient practice of child sacrifice. He followed up this volume in 1994 with Cry of Compassion. In it he said this:

“What’s the difference between Israel and the pagan nations sacrificing their living children to Molech’s demon and our nation aborting its unborn babies? A very important difference – living children were sacrificed to Molech because they had value; our unborn are sacrificed because they have no value. Some may object to the word ‘sacrificed’ being used as a synonym for ‘aborted’, but our nation’s unborn children are sacrificed as surely as were Israel’s living children – their children were sacrificed to appease a demonic idol; ours are sacrificed to appease our selfish desires. Where were the religious people when this cruel inhumanity was going on? They were active and busy and silent. They were now culturally part of the prospering classes and could not be bothered with such disturbing things; besides, sacrificing babies was now socially acceptable – it was the modern thing to do.”

To the evil of infant sacrifice we can now add abortion tourism. How long does our culture have left?