So we have European countries which are so clueless and so dhimmified that they are willing to take in millions of foreigners with barely any background checks or any attempts to get them to fit in to the host culture. We have a few names for that: dhimmitude, faulty multiculturalism, stupidity, national suicide.

All we have to do is look at the pics of those pouring into European nations. While religious lefties go on and on about looking after women and children, for some reason I never seem to see those sorts of folks. All I see are hordes of young, virile males, many of them looking like they just came from the set of Muscle Beach Party.

Um, the only thing that fits that description is an army – and in this case it seems, an invading army. And of course the great majority of these guys are Muslims. Now not every one of these migrants is a terrorist or rapist, but we sure know that some – maybe many – are. 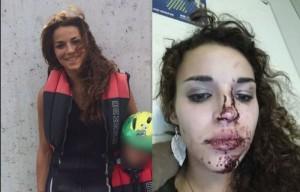 What is the big deal you ask? Perhaps you missed it, but when even the mainstream media start reporting on these matters, then you know we really have a problem on our hands. I refer of course to mobs of African and Middle Eastern (read: mainly Muslim) men sexually harassing European women in their home cities.

The police at first did their best to cover things up for fear of allowing criticism of immigration policies, and for fanning “Islamophobia” but the word got out nonetheless. And it was not just one German city, Cologne, where a frenzied mob of a thousand migrants attacked German women on New Year’s Eve, but all over Germany, and beyond.

Here are some of the gory details compiled from various reports:

Police in Germany are investigating an alarming series of sexual assaults on women trying to celebrate the New Year by large groups of single men “of Arab or North African appearance”. Authorities in the city of Cologne are to hold a crisis meeting on Tuesday after police described a group of some 1,000 men who took over the area around the main station on New Year’s Eve. Women were robbed, groped, and had their underwear torn from their bodies, while couples had fireworks thrown at them. Police have received 90 criminal complaints, around a quarter of them for sexual assault, including one case of rape.

“We managed to go into the cathedral and wanted to go past the Museum Ludwig to join everyone and watch the fireworks by the river, but suddenly we were surrounded by a group of between 20 and 30 men. They were full of anger, and we had to make sure that none of us were pulled away by them. They were groping us and we were trying to get away as quickly as possible.” She said the gang stole mobile phones from the girls’ pockets as they tried to escape. Later that evening when Michelle tried to return home, she saw fireworks being thrown into the crowds.

And this is how Katya describes the ordeal:

“When we came out of the station, we were very surprised by the group that met us there”. She said the group was “exclusively young foreign men”. Keeping close to her friends, they pressed on: “We then walked through this group of men. There was an alley through [the men] which we walked through. Suddenly I felt a hand on my buttocks, then on my breasts, in the end, I was groped everywhere. It was a nightmare. Although we shouted and beat them, the guys did not stop. I was desperate and think I was touched around 100 times in the 200 metres. Fortunately I wore a jacket and trousers. a skirt would probably have been torn away from me”.

And who was responsible for these horrific sex attacks?

An experienced police officer has revealed that 14 of the 15 culprits arrested so far who were involved in the mass sexual molestation of women in Cologne on New Years Eve were newly arrived Syrian migrants. In an interview with Express.de, the officer reveals that 15 men were arrested, of whom 14 were from Syria and one was from Afghanistan. The men had arrived in Germany within the last few days or weeks, according to the officer.

As Pamela Geller reminds us, the blame must fall squarely on people like Merkel and the failed multiculturalism policies:

‘Angela Merkel invited us!’: Muslim sex mob taunted Cologne police after robbing and raping women. And so she did. “I am Syrian, I must be handled in a friendly manner. Mrs Merkel invited me here!” — Syrian refugee sex attacker.

And the attacks were not just confined to Cologne – Berlin, Hamburg, Stuttgart, and Dusseldorf also have experienced similar situations. Consider Berlin for example:

Although on a smaller scale to the unrestrained and un-policed sex attacks in Cologne, the Berliner Morgenpost has now reported on assaults taking place on the street “in front of the Brandenburg gate”. The revelation may prove difficult for the German media, which until now has stressed in most reports on the New Year’s rapes that Berlin was not caught up in the scandal. The paper reports four separate incidents around the city, including a tourist being sexually assaulted by a group of “three to five men”, and two women being “sexually harassed” by men from Pakistan and Iraq.

Well done Germany. This is what happens when Western “compassion” is divorced from reality. And when dhimmitude captures a culture, then we all suffer. As Robert Spencer shares about one utter fool of a leader:

Cologne Mayor: Women should be more careful after Muslim mass rapes, promises “guidance” so they can “prepare”. In other words, buy a niqab. Buy a burqa. If you get attacked by a migrant, it’s your own fault: you should have been more careful. And so Cologne’s Mayor slips seamlessly into the Sharia mindset that it is entirely the woman’s responsibility to avoid tempting men, and entirely her fault if she is attacked.

The over 1 million migrants brought to Germany by Merkel had already inflicted trauma on many women and girls while the offenders received little more than a slap on the wrist from the authorities. Even pro-refugee activists working in camps in Germany had warned of a “culture of rape and violence” where unaccompanied women are viewed as “fair game” and rapes and sexual assaults are routine. A 16-year-old girl was raped on September 11 near a migrant shelter. Two Iraqis refugees had raped an 18-year-old girl behind a schoolyard. Another Iraqi raped a 17-year-old girl at a festival. A 7-year-old girl was raped in a park not far from where her mother was sitting.
Some of these cases were covered up. Others were dismissed as isolated incidents. But the mass attack on nearly 100 women and girls by hundreds of men right in the center of the New Year’s Eve celebrations was too big to suppress. And when it broke, the outrage was tremendous. Yet the rationalizations remain the same.
The authorities claim not to know who was responsible, but are somehow able to assure the media that none of them were refugees. Feminist groups protest broadly against sexual harassment, but insist that there “should be no racism under the guise of women’s rights.” When a handful of the perpetrators are finally brought to trial, their lawyers will claim that like so many Muslim sex offenders before them they were unfamiliar with European “culture” and were “overwhelmed” by all the non-burqaed women.
And those will be lies. The horrifying scene in Cologne is commonplace in the Muslim world.
While many remember the horrifying sexual assaults of the Arab Spring in Tahrir Square, including the attack on Lara Logan, such incidents are actually commonplace in Egypt, especially around Eid Al-Fitr. It doesn’t matter how the women are dressed. A 2006 story describes mass attacks on “any and every girl in sight, whether a Niqabi, a Hijabi or uncovered. Whether Egyptian or foreigner. Even pregnant ones.” 99% of Egyptian women report being sexually harassed. This behavior is common in Muslim lands.
In Iraq, it’s eight out of ten women. In Afghanistan, rape and honor killings are routine. And this is the population that Germany’s mostly Muslim migrants are drawn from.
What happened is inevitable and it will go on happening. More surveillance cameras and patrols won’t stop it. Instead, as in the UK, it will go underground. Muslim men will groom and abuse troubled girls. The authorities will turn a blind eye until a decade later the story gets too big to be covered up. And by then thousands of lives will be ruined. The only way to stop it is to keep it out of Europe and America.
Islam was a declaration of war against women and non-Muslims by Mohammed and his followers. From the mob outside the Cologne cathedral to the rape rooms of the Islamic State, Mohammed’s followers continue fighting the dead warlord’s brutal and ugly war against women.
Mohammed had told his men that the majority of those condemned to hell are women (Bukhari 2:24:541), that they could rape non-Muslim women (Koran 4:24) and that women who weren’t wearing Hijabs or Burkas were fair game (Koran 33:59). This isn’t an aberration. This is Islam.

It sure is Islam. And this is Europe. Great job Europe. Millions of young male Muslims coming into Europe with almost no questions asked. Now that is a great way to destroy Europe in my books. As one commentator put it: “Welcome to the future, Europe. You traded six million Jews for twenty million Muslims, so how’s that working out for you?”