When adults sexually assault children we condemn this in the strongest possible terms, and rightly seek to lock up for a very long time the perpetrators for their grossly evil actions. There is not much worse that we can do to young and defenceless children.

But our governments and activist sexperts are effectively doing the same to our children right now – and we subsidise it all with our tax dollars. Radical social engineers and sexual revolutionaries have declared war on our children, and the lasting damage they are inflicting on vulnerable kids is hardly much different than actual paedophilia. Both are destroying our children.

These adult social activists are targeting your children and mine, and they do not give a rip how much harm they are causing in the process. It is time to say no to this madness and reclaim our children from the radicals who are out to destroy them.

Consider the latest outrage being perpetrated against our children, this time from the UK. The headline alone is shocking enough: “Children as young as 13 to be asked whether they are ‘gender fluid’, ‘demi-girl’ or ‘intersex’: Official survey asks pupils to pick from a list of TWENTY-FIVE genders”. The article begins: 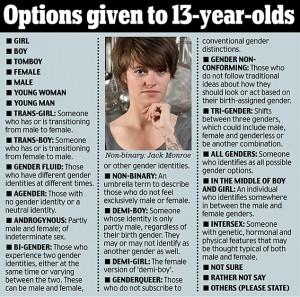 Children as young as 13 have been invited to describe their gender as any one of 25 different options in a Government-backed survey. The choices put before teenagers in research for the Children’s Commissioner for England include ‘gender fluid’, ‘demi-girl’ and ‘tri-gender’.
The list of alternatives is being offered to children as part of a campaign to ‘find out how gender matters to young people’. Youngsters are also asked whether they feel safe using single-sex toilets, and if their school should have unisex ones instead.
Other questions include whether their school should have just one unisex uniform. The research, described by one of its authors as ‘committed to feminist methodologies’, was condemned by critics who said it was biased and politically motivated.

Not everyone is pleased with this, and at least a few voices of sanity remain in the UK:

Critics last night accused the research of ‘exploiting’ teenagers for political ends. Author and family researcher Patricia Morgan said: ‘It is obviously biased. It amounts to the exploitation of children for the purposes of gender pressure groups.’ Simon Calvert, of the Christian Institute, added that the survey could be ‘profoundly confusing’ for children, adding: ‘There aren’t 25 genders. There are two sexes. We feel for people who struggle with gender identity disorder but we must not let our sympathy for them outweigh our sympathy for the great mass of children who need to feel safe and protected.’

And one person who cares greatly about our children and our future weighed into this moonbattery with an incisive article today. Melanie Phillips begins her important piece this way:

Once upon a time, ‘binary’ was a mathematical term. Now it is an insult on a par with ‘racist’, ‘sexist’ or ‘homophobic’, to be deployed as a weapon in our culture wars. The enemy on this particular battleground is anyone who maintains that there are men and there are women, and that the difference between them is fundamental.
This ‘binary’ distinction is accepted as a given by the vast majority of the human race. No matter. It is now being categorised as a form of bigotry. Utterly bizarre? Scoff at your peril. It’s fast becoming an enforceable orthodoxy, with children and young people particularly in the frame for attitude reassignment.
Many didn’t know whether to be amused or bemused when the feminist ideologue Germaine Greer was attacked by other progressives for claiming that transgender men who became women after medical treatment were still men. What started as a baffling skirmish on the wilder shores of victim culture has now turned into something more menacing.
The Commons Women and Equalities Select Committee has produced a report saying transgender people are being failed. The issue is not just whether they really do change their sex. The crime being committed by society is to insist on any objective evidence for this at all. According to the committee, people should be able to change their gender at will merely by filling in a form. Instead of requiring evidence of sex-change treatment, Britain should adopt the ‘self-declaration’ model now used in Ireland, Malta, Argentina and Denmark. To paraphrase Descartes, ‘I think I am a man/woman/of no sex, therefore I am.’

The political class is obsessed by gender issues. I trust you are, too. Surely you can reel off the differences between trans, intersex, polygender, asexual, gender–neutral and genderqueer? Do keep up. We’re all gender fluid now, no?
No. Gender is not fluid. What is fluid, however, is the language.
The notion that gender can be deconstructed in accordance with ideology started in the 1970s when (ironically, in view of the Greer row) it was promoted by feminists for whom gender was not a biological fact but a social construct. But it’s not. Gender derives from a complex relationship between biological sex and behaviour. And nature and nurture are not easily separable. Some unfortunates feel they are trapped in the wrong gender. Surgery may or may not resolve this confusion. Many who change sex still don’t feel comfortable; tragically, some even commit suicide.
Crucially, however, such people are desperate to make that change. That’s because for trans people gender is certainly not irrelevant but is of all–consuming importance. Yet Miller and her committee would deprive them of the ability to announce their new sexual identity on passports or other official documents.
Is this not, by Miller’s own logic, cruelty to trans people? But of course logic doesn’t come into this. Gender politics is all about subjective feelings. It has nothing to do with fairness or equality. It embodies instead an extreme egalitarianism which holds that any evidence of difference is a form of prejudice.
If people want to identify with either gender or none, no one is allowed to gainsay it. Objective reality crumbles under the supremacy of subjective desire. Those who demur are damned as heartless.

You could say the West is very much on a journey. From divorce and lone parenthood to gay marriage, what was once regarded as a source of disadvantage or category error has been transformed into a human right. In the process, compassion has turned into oppression.
The Miller committee writes about one of its witnesses who talked about the government’s Advancing Transgender Equality plan: ‘Christie Elan-Cane told us that the plan was, from per [sic] point of view as a non-gendered person, “all plan and no action, because nothing resulted from it”.’
Yes, I also stumbled over what I thought was a typing error; but no, a footnote tells us: ‘Christie Elan-Cane asked us to use the non-gendered pronoun “per”.’ Such supine surrender to this hijack of language, the signature motif of totalitarian political systems, tells you more than anything else what’s in store for us.
Gender cannot be at real risk because it is anchored in an immutable reality. What is on the cards is oppression, socially engineered dysfunction and the loss of individual freedom. And it is so-called Conservative politicians who are helping wave the red flag of revolution.

One certainly does not need to be religious to be utterly incensed at this sort of diabolical social engineering of our children. But the words of Jesus certainly do come to mind here. You know, the words about those who would cause little ones to stumble having a millstone hung around their neck and being tossed into the sea.

These demented sexperts certainly are causing our little ones to stumble, and for doing so, I would be all in favour of rolling out the millstones.

Oh, and one last word. If anything, the social activists are being far too narrow, bigoted and discriminatory here. Why are they just whining about genders? They should of course be whining about the rights of the “trans-species” crowd as well.

The madness is never ending. And it is our children who are the biggest losers here.

17 Replies to “Hey Deranged Adults: Keep Your Evil Hands Off Our Children”