Yesterday a group of nasty, frenzied Christian activists terrorised a poor politician and her staff, destroying her office and causing huge amounts of damage in a carefully planned and premeditated attack. There was graffiti all over, both in and out of the office, with slogans like “You will burn in hell” and “We will shut you down!”

Despite all the damage, all the horrific bullying, all the terrorism, and all the inexcusable violence, none of the Christians were arrested! This is one of the most shocking aspects of this appalling case, and steps must be taken to rectify this immediately. This sort of utterly reprehensible behaviour cannot and must not be tolerated.

Thankfully all the major media outlets took their journalistic responsibilities seriously on this. Every television news report ran with this as their lead story last night, devoting lengthy reports on it. And the next day’s newspapers all featured this as THE major front page story, complete with plenty of colour pics of all the incredible destruction by the maniac attackers.

Political leaders of all stripes have rightly condemned this violent attack, and have asked for all those involved to face charges, with the most severe penalties. And they have rightly called for Christian churches not just in this city, but in the entire country, to admit their collective guilt, and to take steps to ensure that this Christian violence and hatred is fully and finally dealt with.

There is also talk about monitoring all sermons and public talks given in churches and at Christian conferences to ensure that this violent extremism is not allowed to flourish. And of course all the damages should be covered not by taxpayers, but by those very Christian groups who were responsible for this outrageous assault in a free and democratic society. 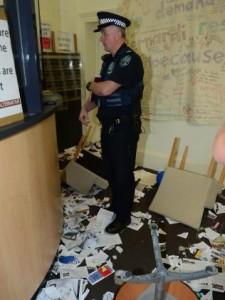 This is certainly one of the darkest days in Australia’s history. This group of Christian vigilantes is nothing more than a bunch of despicable terrorists and they should be shown no mercy. The fact that they were not arrested on the spot yesterday will just embolden them to commit even more horrible crimes like this.

It is time for Australia to unite against this direct assault on everything Australia holds near and dear. We must never tolerate this thuggish behaviour, but crush it wherever it is found. Failure to do so will just ensure that more of these acts of terrorism are carried out.

Oh, perhaps I should mention here that the above story is not true – at least not entirely true. Yes, a horrific assault did take place yesterday at a politician’s office. Yes great damage was caused. And yes, the police did absolutely nothing about it.

But no, the media did not run with this as a major story. They barely ran with it at all. And no, there was no national outrage and strong reaction from our elites and our leadership. And most importantly, no, this was not carried out by enraged Christians.

All this happened at the hands of secular left terrorists, pushing their homosexual and related activist agendas. Yesterday I wrote about this attack on the office of Cory Bernardi: billmuehlenberg.com/2016/03/18/the-tolerance-brigade-again-reveals-its-real-colours/

My point in this article should be obvious. A gang of homofascists committed acts of great violence and destruction, yet our lamestream media and our ruling elites basically just yawned. Imagine for one moment if a group of Christians had carried out an identical attack like this, say on a Labor politician’s office, or on a homosexual lobby group’s office.

The whole world would know about it by now, and it would simply serve as an excuse for the State to further clamp down on all Christians, churches and Christian activities. But because this act of terrorism was done by the pink tolerance brigade, everything seems to be just peachy.

The supreme irony of this attack being deliberately carried out yesterday, which was “National Day of Action against Bullying and Violence,” seems to have been lost on most folks. Because nothing says anti-bullying and anti-violence like engaging in acts of bullying and violence.

Given that the attackers said it was Cory’s stance on the so-called Safe Schools Coalition that was a major reason for it happening, one could rightly ask that the SSC itself offer us all an apology, or at the very least, demonstrate clearly how they fully distance themselves from this violence and thuggery.

But it has been crickets chirping from the SSC and their supporters as well. No surprises there. The double standards we see in operation here is as deplorable as it is par for the course. In the ruling ideology’s narrative, there are only one set of bad guys: Christians and conservatives. The heroes are secular lefties, and the more violent and destructive they are, the better it seems.

After discussing this episode elsewhere yesterday, one concerned individual asked me, “When will it all end?” I replied as follows: “It ends when we are all in prison, or when the church breaks out of its cultural captivity, repents, and starts standing for righteousness and Christ for a change”.

A slight glimmer of hope here. I just went to the Adelaide Advertiser to see what that newspaper was saying today. Cory is standing strong, and demanding action be taken. And a few voices have perhaps begrudgingly come out to dissociate themselves from the protesters. It begins:

The “full force of the law” should be brought to bear on protesters who trashed Senator Cory Bernardi’s office and targeted his children’s school, he says. The university students and high-school pupils, who were protesting against his opposition to the Safe Schools anti-bullying program and ongoing debate about same-sex marriage, engaged in abuse, vandalism and threats.
Both Flinders and Adelaide universities released statements condemning the action. Branding the protesters “a bunch of cowards”, Senator Bernardi labelled the fracas a form of intolerance and intimidation that only “strengthened his resolve”.
He said: “They also headed down to my children’s school and sought to target it as well. They had to lock gates and take other preventive measures. If peaceful protests turn into violent and damaging protests the people responsible for that need to be held to account. I’m happy for the full force of the law to be brought upon those who’ve done property damage and threatened my staff.” Police reported one man for graffiti damage to a road sign and are reviewing CCTV evidence from the scene.
There were young people and people on their first day at work at his Kent Town office, he said. About 20 students — from Adelaide and Flinders universities, UniSA and high schools — occupied the Grenfell St office at noon and scrawled abusive messages on the outside walls and veranda. They also overturned tables and chairs, wrote messages in chalk on the carpet and chanted slogans such as “racist, sexist, anti-queer, Bernardi is not welcome here”.

Some common sense – albeit a rather weak and belated reaction – is better than nothing I guess. But my point fully remains. A hundred times more outrage would have been heard had a group of Christians did the very same thing. The anti-Christian secular left stranglehold over Australia and the West is on full display here.

And don’t expect things to get better any time soon.

8 Replies to “Another Violent Attack by Intolerant and Abusive Christians”