Millions of people have just watched the opening ceremony of the 31st Olympiad, the summer Olympics at Rio de Janeiro. Now they will settle down for over two weeks of sport, competition and athleticism. And it will be quite a spectacle indeed, with over 11,000 athletes from over 200 countries competing in over 300 events.

The first Olympics held in South America, this is an event which will be watched by millions, if not billions, of people across the globe. And for good reason: this is riveting viewing, with superb athletes in peak condition from around the world competing to be the best, the fastest, the highest, the longest and the most accurate.

That sport can be turned into a god for many of course goes without saying. But most would acknowledge that having people from all sorts of different countries vying for a prize at a sporting arena is preferable to having them competing by means of bombs, bullets and armed conflict. 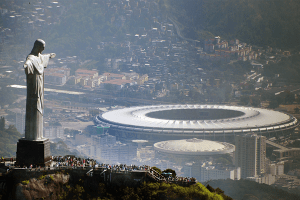 And for countless viewers this will be a welcome time out from ordinary life. For a few weeks it will mean millions of people might forget about some of their pressing concerns and simply enjoy the games. Thus I will be tuning in from time to time as well.

But of course as a Christian I must view even something as incredible as the Olympics in the light of eternity. Many athletes will be competing for earthly glory, earthly awards, and earthly prizes. It is all good in its place, but at the end of the day we really should be competing for heavenly glory, heavenly awards and heavenly prizes.

We toil and struggle for earthly fame, recognition and awards, but of far greater importance is to work for God’s approval and his rewards. The Apostle Paul even used imagery from the Olympics of his day to make these truths. For example, in 1 Corinthians 9:24-27 he expresses things this way:

Do you not know that the runners in the stadium all run in the race, but only one wins the prize? Run so as to win. Every athlete exercises discipline in every way. They do it to win a perishable crown, but we an imperishable one. Thus I do not run aimlessly; I do not fight as if I were shadowboxing. No, I drive my body and train it, for fear that, after having preached to others, I myself should be disqualified.

Corinth of course was where the Isthmian Games were held, games similar to those of the Olympics. So Paul was likely drawing directly on these games when he encouraged the Corinthians to run the spiritual race and fight the spiritual fight.

They took the realities of the sporting events of their day and used them to illustrate eternal spiritual truths. As he said in 1 Cor. 9, “They do it to win a perishable crown, but we an imperishable one.” That is the one key truth we must all lay hold of.

At the opening ceremony at Rio some of the past great Olympians took part in the proceedings. Of course most were much older and certainly not in the same shape as they were when they won gold, or silver, or bronze. And of course many of these older Olympic champions are now long gone. So all their earthly glory, fame and accolades now mean nothing to them.

All that matters now is where they stand with God. Have they been reconciled to God through Christ, repenting of their sins and finding new life? Or have they died without Christ and are now facing a lost eternity? That is the only really vital thing that matters at the end of the day.

Sure, we enjoy sports’ excellence and we can enjoy these games while they last. But all the athletes competing, and the officials involved, and all the viewers enjoying the games will find that all this will come to an end in just over two weeks.

Then it is back to the same old routine, until another major event comes along for the athletes to compete in, or for the viewers to take their mind off their problems and keep them from facing reality. But there is only so much spectacle and entertainment. We all must face the real world and our eternal condition sooner or later.

Those are the most important choices we can ever make. Winning those races and being victorious in those fights is what really matters most in life. Thus it is my prayer that all those now consumed by the Olympic Games think about the bigger issues in life.

And there are plenty of reminders out there to this end. Indeed, we saw one such reminder again today as we watched the opening ceremony. As the panoramic shots of the main stadium were taken and the fireworks were going off, we saw once again one of the great statues of modern times.

I refer to the 30 metre tall Christ the Redeemer statue overlooking Rio and the Olympics. This impressive work of art was completed in 1931 after 9 years of construction. The outstretched arms span some 28 metres. It stands like a sentinel over the city, and it is of course a massive tourist attraction.

The sad truth is, this incredible structure will likely mean very little to most people today. Most may not even know what it is called. And if they do, they likely do not know what a redeemer is, and why he is so important. It is that enduring truth that we must once again come to understand and appreciate.

Christ is indeed the redeemer. He has come to redeem us from our sins. Our sin and selfishness has separated us from God and we are now in need of redemption. And that too is a term that has a very real history for the New Testament writers.

When a slave was bought and set free back then, the one doing the purchase was a redeemer – he paid the price that was required to secure the slave’s freedom. That is just what Christ has done for us by means of his death and resurrection at Calvary 2000 years ago. See more on this marvellous term here: billmuehlenberg.com/2016/05/11/christ-our-redeemer/

I am not alone in reminding people during these games of the really important things in life. Right now many Christian groups, churches and individuals are sharing the good news of Jesus Christ at Rio and other places. Because I know most about one such group, let me briefly mention it.

Youth With A Mission is there with many young people doing all forms of evangelism and outreach and mercy ministries. As they say on their website:

From August 5-21, 2016, over 200 nations will be competing in the Olympic Games, and we will be right there to reach out to tourists who arrive in Rio de Janeiro. We’ll also minister in word and deed to the residents of Rio. There will be many different ministry opportunities, such as: human trafficking, sports ministry, prayer, drama, music, dance, arts, Bible distribution, etc.

Well done YWAM. If you are a Christian, please pray for these guys and all the other Christians involved in reaching the masses who have converged on Rio. It is a very needy city indeed apart from the Olympics – full of poverty, crime, corruption, sleaze and immorality. Rio needs Christ, as does every city, and every inhabitant of those cities.

So enjoy the games – either by being there or viewing them on television. And remember what Christ the Redeemer is all about. The statue represents the most enduring truth going: without Christ we are all lost and in a serious mortal condition. With Christ we have redemption, forgiveness of sins, and a new life with God.

2 Replies to “Rio, Christ and the Olympics”