In my books they are pretty much the same: Christians In Name Only and Republicans In Name Only. While there are many genuine Christians who reluctantly and unenthusiastically will vote for Trump because Clinton is so bad, there are plenty of folks who really believe Trump is our human messiah who will somehow make America great again.

It is the CINOs and RINOs that I offer my remarks to, not the millions of crestfallen Republicans who feel their party has betrayed them with this fraudulent candidate, nor the numerous real deal believers who will vote for him but only as a last resort.

Right now plenty of people who call themselves Christians and conservatives think there is only one absolute priority: dump Hillary at all costs. That for them is the most important thing we can possibly do, and nothing else really matters. Sorry, but it is exactly because I am a Christian and a conservative that I reject such idolatrous thinking.

There are other things far worse for the believer than having Hillary elected. One obvious thing is to drag the name of our Lord Jesus Christ through the mud as we tell the world that biblical values – along with conservative principles – really don’t matter, since the only thing that does matter is getting our boy Donnie in. 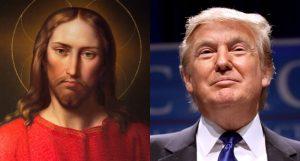 This is destroying our Christian witness and shaming our Lord – and that to my way of thinking is far worse than one or two terms of the evil Clinton. Sure, she will further increase persecution of Christians. But is that the worst thing there is?

While I greatly value religious liberty, I know that persecution is the promised lot of the believer, and the faith of the saints is often greatest during such times. We are not to seek persecution, but neither are we to avoid it at all costs, especially if it may be part of God’s hand of discipline and/or judgment on an immoral, ungodly and rebellious America.

Worse than losing more freedoms is when we lose our Christian testimony. When we no longer elevate Christ as the supreme good and seek his glory above all else, but put some human would-be messiah on a pedestal and pretend he will somehow save America, then we have betrayed our faith and made Christ secondary in our lives.

And it should be obvious that millions of folks who claim to be Christians are already doing this big time. Simply witness their dogged defence of Trump and the lousy excuses they make for his immoral behaviour. Christians rightly said we could never support someone like Bill Clinton when he did similar things, but now they say Trump can do whatever he likes and we will even make excuses for him. ‘After all, he must win no matter what.’

That is hypocrisy and that is the demolition of our public testimony for Christ. Sorry folks, but if the choice is to let America keep going down the sewer, or betraying my Lord, I know which one I will run with. Sure it would be great to somehow rescue America, the land of my birth and a country I so greatly love.

But no nation is immortal. They all come to an end eventually, and it seems clear that the US is going down the tubes fast. Barring widespread, heartfelt repentance and revival on the part of the church, I see no hope for America. I sure don’t see any hope in a Trump presidency.

And the signs of Christians selling out are everywhere to be found. When our Christian leaders actually tell us that political pragmatism must trump biblical values, then you know the game is up. Ben Carson for example effectively said that we have to put our Christian values on hold until after the election.

This is what he actually said: “I would love us to bring back our Judeo-Christian values and begin to teach those things and emphasise them at a time other than a political election – let’s do that, but right now the train is going off the cliff. You got to understand that.”

And when another Trump supporter, Jerry Falwell Jr., was asked about what he thought of Carson’s comments he agreed, saying “absolutely”. You can listen to both revealing, and frightening, interviews here:
www.theamericanconservative.com/dreher/the-ben-carson-option/
therightscoop.com/put-christian-values-hold-election-jerry-falwell-jr/

Wow. That is scary stuff. Political expediency trumps biblical values and truths. And these are so-called Christian leaders (well, Carson is SDA). That is as good a way to destroy Christianity in America as anything Hillary will do.

Let me share some thoughts from Brian Mattson from his superb piece, “Freedom or Integrity: Evangelicals, Choose One”:

As a public theologian, my paramount concern in the coming election is the public witness of the Christian community. I believe the health of society requires a strong Christian influence, and societies that lack it tend to be dysfunctional societies. Part of obeying the gospel call to love our neighbors is seeking to influence society with the claims of Christ. I also believe the two major party candidates for President of the United States are both threats to Christian public witness. Whether they are equal threats is the matter we must decide.

He then examines the very real threats Clinton poses to Christian freedoms. It is obvious she will be real bad news, as so many have outlined already (see for example the Michael Brown piece I link to below). And then he speaks to the damage Trump would do to our Christian witness:

If Hillary Clinton is a threat to the freedom of Christian public witness, Donald Trump is a threat to the integrity of Christian public witness. I understand and sympathize with Christians privately and quietly voting for Donald Trump because they cannot cope with the thought of the Clintons back living on Pennsylvania Avenue. I do not understand or sympathize with promoting, cheerleading, and excusing Donald Trump. The spectacle has been personally horrifying to me, and I believe it should be horrifying to all of us.
I have heard it said that Donald Trump is the only thing standing between us and divine judgment. I submit to you that Donald Trump is himself divine judgment. God is holding a mirror to our faces. What better representative of contemporary America than a greedy, proud, boastful, narcissistic, and licentious man? Christian reaction to this man ought to be the opposite of cheering, much less enthusiastic cheering. God’s societal judgments come, Paul tells us in Romans 1, by “handing us over” to our sins. Has he not? Donald Trump is us. Indeed, we have been handed over to two perfect representatives of American culture in the early 21st century: corrupt fools.
I believe the promotion and support of Donald Trump by Christian leaders is just as damaging to Christian public witness as the prospect of a Clinton presidency. Under Clinton, we may eventually be muzzled. Under Trump, we might be free to broadcast from the rooftops, but everyone will ignore us. Rightly ignore us.

Which loss is worse? The freedom of our public witness, or the integrity of our public witness? I’m inclined to believe it is the latter, for at the end of the day our integrity is that for which we are most directly responsible. Our political freedoms rest on many things outside of our control; our integrity rests on something solely within our control. I believe we will be judged accordingly.
Yes, President Clinton may usher in her progressive utopia, complete with jail time for preaching Leviticus or Romans 1. But why should we fear she who can destroy the body? Much better is to fear God. To my mind, there has been precious little fear of God among the endlessly elastic and pragmatic Christian court prophets. That, too, is a sign of God’s judgment. Read First and Second Kings sometime.
I believe the Christian reaction to this election should be sackcloth and ashes. Revulsion and repentance. I have made my decision, and all I can do is commend it to you: I refuse to lend my name to either candidate. I will either vote for a third party candidate or write in the name of somebody I can sincerely imagine as an admirable, principled leader. I do not believe this is “throwing away” my vote. I believe it is, in the wise words of Bill Buckley, “Standing athwart History, yelling, ‘Stop!’” I am calling for the Christian community to join me. Fighting for the freedom of our public witness should not come at the expense of the integrity of our public witness. This is the corner into which the Republican party has painted us.
What kind of public witness is it to sacrifice our integrity for our freedom? The message is that all of the old accusations are true: evangelical Christians are, as Cal Thomas once called them, “blinded by might.” Princes, power, and politics are their true allegiances. They live in fear rather than trust. God’s people should say, “No.” Forcefully and en masse.

I fully agree. Let me finish with the closing words of four columnists who have just recently written about the election. While all four have somewhat differing conclusions to their important articles, they all say things which I strongly concur with.

“The marriage of convenience is over, at least for now. Perhaps the best we can hope for in this sad election cycle with these two unsupportable candidates is that we do not allow a national disgrace to become the Great Evangelical Embarrassment.” –Al Mohler
www.washingtonpost.com/news/acts-of-faith/wp/2016/10/09/donald-trump-has-created-an-excruciating-moment-for-evangelicals/

“I do understand that many of you cannot find it in yourself to vote for Donald Trump, but whatever you do, do not vote for Hillary Clinton, and please encourage your conservative Christian friends not to vote for her either. To do so is to hand her the tape to gag your mouths and the rope to fasten your hands. You have been forewarned.” -Michael Brown
stream.org/be-assured-president-hillary/

“That a number of ranking Republicans, including John Thune of South Dakota, the third-ranking senator, called on Trump to quit the race and open the way for Pence, has little practical effect before the election but enormous implications should Trump be elected. So does the fact other Republican leaders, like Kelly Ayotte of New Hampshire, said they plan to write in Pence’s name when voting for president on Nov. 8. That’s also what I plan to do. These moves point to Republican members of congress potentially voting to impeach Trump. Accordingly, though I personally could not possibly vote for Trump, I will root for him to win – and then to be removed, replaced by President Pence.” –Daniel Pipes
www.danielpipes.org/17016/what-a-conservative-to-do-vote-for-pence

10 Replies to “CINOs and RINOs are Both Selling Us Out”