The darkness descending over Canada gets worse by the day, and the latest act of national suicide comes in the form of an “Islamophobia” motion. The just passed “Systemic racism and religious discrimination” motion is a worry for anyone concerned about freedom and concerned about creeping sharia.

Here it is the text of M-103 “Systemic racism and religious discrimination”:

That, in the opinion of the House, the government should: (a) recognize the need to quell the increasing public climate of hate and fear; (b) condemn Islamophobia and all forms of systemic racism and religious discrimination and take note of House of Commons’ petition e-411 and the issues raised by it; and (c) request that the Standing Committee on Canadian Heritage undertake a study on how the government could (i) develop a whole-of-government approach to reducing or eliminating systemic racism and religious discrimination including Islamophobia, in Canada, while ensuring a community-centered focus with a holistic response through evidence-based policy-making, (ii) collect data to contextualize hate crime reports and to conduct needs assessments for impacted communities, and that the Committee should present its findings and recommendations to the House no later than 240 calendar days from the adoption of this motion, provided that in its report, the Committee should make recommendations that the government may use to better reflect the enshrined rights and freedoms in the Constitution Acts, including the Canadian Charter of Rights and Freedoms.
www.parl.gc.ca/Parliamentarians/en/members/Iqra-Khalid(88849)/Motions?sessionId=152&documentId=8661986 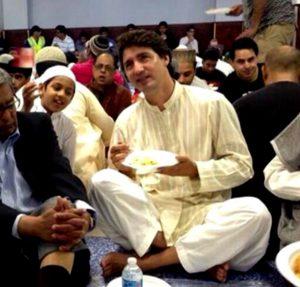 The motion, not surprisingly, was tabled by a Muslim member of Prime Minister Justin Trudeau’s Liberal Party, Iqra Khalid. A quick read of the motion will review why many are so greatly concerned about it. What exactly does “Islamophobia” mean?

It is not defined, but one can imagine it will mean whatever Muslims take it to mean, including any criticism of Islam whatsoever. Thus a criticism of jihad, terrorism, misogyny, female genital mutilation and other areas of genuine concern can be seen as “Islamophobic” and dealt with accordingly.

And what in the world does “the need to quell the increasing public climate of hate and fear” mean? If I came to Canada and held a seminar on creeping sharia or Islamic terrorism, would the meeting be closed and I dragged off to court?

In this brave new world of Islamophilia and political correctness, the enemies of the state are now anyone who dares to say anything negative about Islam, while Muslims saying the most vile, reprehensible and violence-provoking things seem to be getting a free pass.

Consider what the Quebec Imam Sayed AlGhitawi from the Al Andalous Islamic Center in Montreal said in his prayers recently:

O Allah, destroy the accursed Jews
O Allah, show us the black day you inflict on them
O Allah, show us the wonders of your power and ability inflicted on them, O the most Merciful
O Allah, show us how you do to them what you did to [the peoples] of ??d and Thamud [ancient peoples that perished by Allah because they didn’t heed the warnings of the prophets]…
O Allah, make their children orphans and their women widows
en.cijnews.com/?p=193990

Polling done just prior to the passage of this motion found that if the vote were up to the Canadian people, it would not have passed:

More than four-in-ten Canadians say they would vote against the motion condemning “Islamophobia and all forms of systemic racism and religious discrimination”, while fewer than three-in-ten would vote for it. A sizeable number – nearly one-third – say they are not sure or would abstain from voting.
This finding comes from a public split on the larger significance of anti-Muslim attitudes and discrimination in society. Half say it’s not necessary for government to condemn Islamophobia, and 55 per cent say the problem of anti-Muslim sentiments in this country has been “overblown” by politicians and the media.
angusreid.org/islamophobia-motion-103/

Many have expressed their deep concerns about this motion. For example, Maxime Bernier, a candidate for the Conservative Party of Canada, said this: “Free speech is the most fundamental right we have. I am opposed to M-103. Canadians should be treated equally regardless of religion.”
www.breitbart.com/london/2017/03/24/canadian-parliament-passes-controversial-islamophobia-motion/

As for so-called “systemic” racism, if anything, Muslim Canadians are the beneficiaries of extraordinary acts of accommodation, far beyond anything other faith groups in Canada enjoy. Name one faith group other than Muslim that public schools in Canada accommodate by allowing boys and girls to be segregated, by excusing children from classes to participate in prayer services, or by imposing religious dietary rules?
Indeed, the group most likely to suffer systemic discrimination in Canada these days is Christians. Christians are regularly barred from publicly celebrating their faith for fear that doing so might be interpreted by other faith groups as an act of discrimination against them.
Are there incidents of discrimination against Muslim Canadians? Yes, but they are isolated and quite properly condemned when they occur. Suggesting that anti-Muslim bigotry is rampant and systemic is both wrong and insulting to fair-minded Canadians.
www.bradforleader.ca/issues/m-103.html

And Farzana Hassan, who describes herself as “a liberal Muslim” also rejects the motion. She wrote:

Khalid is mistaken if she believes any rational discussion on Islamic practice castigates all Muslims. She must understand that any well-intentioned and constructive discussion on a religious practice or ideology is a fundamental right of every Canadian.
There is no phobia of Islam in Canada. There is genuine resentment toward orthodox Islam. But it has little to do with the usual public discourse.
Some practices, whether we discuss them in public or not, are commonly known to be associated with orthodox Islam, such as polygamy, wife battery and ostracism of religious minorities. It is up to moderate Muslims to distance themselves from these outrages as much as possible. So far no robust public challenge to such practices has emerged from moderate segments of the community.
www.torontosun.com/2017/02/16/im-a-liberal-muslim-and-i-reject-m103

Two months ago columnist David Krayden warned about this: “Canada is inching toward a broadly-based law that would codify ‘Islamophobia’ as a hate crime without even defining Islamophobia or demonstrating that it is a phenomenon requiring legal action.”
dailycaller.com/2017/01/26/canada-inching-towards-islamophobia-law/#ixzz4cOHuaNHD

And Rex Murphy questions the whole point of the motion:

It is interesting that by raising this matter to parliamentary attention, the motion itself provoked more of a storm than it settled. There were contentions in the House. There were the usual accusations of playing politics with a sensitive issue. There was sharp division on why Islam was centred in the debate and not all prejudice towards all religion. Was that helpful? To return to my original question, was the debate and division in Parliament itself likely to reduce in any measurable way the Islamaphobia it was designed to reduce? I cannot see it. The motion is either futile, inutile, or both.
news.nationalpost.com/full-comment/rex-murphy-m-103-has-passed-and-what-today-has-changed-for-the-better

Of course critics will be saying it is just a motion, not law, so what is the big deal? But as journalist Faith Goldy reminds us, what would the reaction have been if a motion was passed condemning homosexuality? This is clearly sharia creep in action.

Let me conclude with this 6-minute video by Goldy which is worth watching and passing along: www.youtube.com/watch?v=RdSihRRXJso