A few years ago hardly anyone was talking about transgenderism. Today you cannot go through one whole day without hearing about it incessantly. The radical feminist and homosexual lobbies of course laid the foundation for all this by attacking the very idea of gender, gender differences, and the vital importance of heterosexual marriage and family.

Now we have an all-out war declared on biology, on reality, on family, on marriage and especially on our children. Daily we see the gender benders at work, and it sure is not looking pretty. It has now become a fulltime job just to document all the latest cases of moonbattery occurring because of the militant gender anarchists. 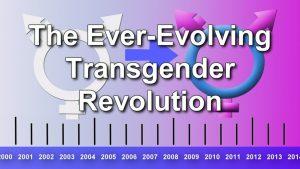 All I can do is offer a brief summary of the latest outrageous examples of these trans-gressions. Let me just present a half dozen recent cases of the trans madness in operation:

World’s First ‘Transgender’ Doll Unveiled at New York Toy Fair
February 20, 2017
A doll made in the likeness of a reality television star who was born a boy but identifies as a girl was unveiled this weekend in New York. The Tonner Doll Company, led by Robert Tonner, introduced the Jazz Jennings doll at the International Toy Fair in Manhattan on Saturday. “Jazz stands for everything I respect from a human nature point of view: She’s incredibly brave, intelligent, warm-hearted and creative,” he said in a statement.
As previously reported, Jennings is known for being the center of the TLC reality show “I Am Jazz,” which follows the now 16-year old’s life living as the opposite sex. “Although born male, Jazz is a transgender female and has been living as a girl since kindergarten,” the network describes the show on its website.
christiannews.net/2017/02/20/worlds-first-transgender-doll-unveiled-at-new-york-toy-fair/

Transgender: ‘Toni the Tampon’ Teaches Children Men Can Menstruate
March 13, 2017
The author of a children’s coloring book has invented a character named “Toni the Tampon” to instruct children that men can menstruate. Cass Clemmer, the author of The Adventures of Toni the Tampon, has been using her coloring book character to “destigmatize” menstruation. Now, however, she also wants to “de-gender” the female biological process and to persuade children that men get periods too.
Clemmer’s latest adventure of Toni the Tampon is one aspect of the progressive campaign to blur the differences between male and female, and to ultimately create a “genderless” society which bars the commonplace civic distinctions between biological males and biological females in a heterosexual society.
This larger political campaign is also pushing judges to permit men to change their legal sex by simply declaring they have a female “gender identity.” That ruling would allow men to freely use women’s shower rooms, women’s shelters, and women’s athletic leagues. The ideology also says that women with the “gender identity” of men should be described as men — even when they are menstruating.
The artist says Toni the Tampon purposely has a gender-ambiguous name because she hoped to create a coloring book that was “affirming to all menstruators.”
www.breitbart.com/big-government/2017/03/13/transgender-toni-the-tampon-teaches-children-men-can-menstruate/

Transgender athlete tried to murder official who questioned his competing with women
March 20, 2017
A male transgender athlete, worried that his numerous awards from competing against women runners might be taken away, attempted to murder the officials who were investigating him. Michael Jeska was a “fell runner,” or hill climbing competitor, who “transitioned” via gender reassignment surgery to “Lauren” in 2000. He began winning races against women, including the 2010, 2011, and 2012 Women’s English Fellrunning Championships, and was crowned the 2012 British women’s champion.
But when Jeska’s eligibility to compete as a female was questioned by an athletic authority because of high testosterone, he decided to take action. Jeska, 42, pleaded guilty last September in a British court to the attempted murder of Ralph Knibbs, 51. Jeska was sentenced last Tuesday.
www.lifesitenews.com/news/uk-transgender-runner-sentenced-to-prison-after-attempting-to-skewer-athlet

Transgender woman ‘groped 15-year-old girl then tried to buy her silence with a McChicken meal and tickets to see Mrs Brown’s Boys’
March 21, 2017
A transgender woman ‘bribed’ a 15-year-old girl with McDonald’s fast food after sexually assaulting her and then offered to take her to see Mrs Brown’s Boys, a court hard. Dawn Love, 57, offered to give the schoolgirl a lift home in Camberley, Surrey in 2014 before groping her, a jury at Guildford Crown Court was told.
She then drove to McDonald’s restaurant, where she bought the girl a McChicken meal at the Drive Thru before taking her home. Days later, Love is said to have sent a text message to the girl which read: ‘Do you like Mrs Brown’s Boy’s? Do you want to come with me to watch it? I will pay you.’
Prosecutor Richard Elliott told the court: ‘The complainant was out walking in Camberley, Surrey, close to the train station and was going to get a bus home. Ms Love was in her car and pulled up and asked the complainant if she wanted a lift.’ The prosecutor added: ‘Dawn Love then, with her hand, started to stroke the complainant’s legs, over her clothes, up towards her thigh.
‘The complainant made it clear that she didn’t want this to continue and Ms Love raised her hand to the complainant’s side and then started rubbing, through her clothes, close to her breasts. Shen then clasped her breasts over her clothes and after all this she took her to McDonald’s.
www.dailymail.co.uk/news/article-4332436/Transgender-woman-groped-15-year-old-girl.html#ixzz4cUWU2VU2

Transgender rapist moved to women’s prison after sex change
March 21, 2017
A rapist has been moved to a women-only prison after having gender reassignment surgery. Jessica Winfield, formerly known as Martin Ponting, was relocated to HMP Bronzefield in Ashford, Surrey. The convicted rapist was previously held at top security Whitemoor prison in Cambridgeshire, where she was serving a life sentence.
Before her gender reassignment, Winfield complained of being victimised for being a transsexual. Ten years ago, she wrote to prisoners’ newspaper Inside Time to say she was given a “hard time because of my sexuality, possibly through lack of understanding and empathy”.
At the time she wrote: “I have changed my name to that of a female to prove to the authorities and everyone concerned that I am very serious about my gender and that I do not feel right being a man.” But one of Ponting’s victims has described the fact her attacker was allowed a sex change as “diabolical”.
She told the Sun newspaper: “There are not enough words to describe him and the evil he has done. It is diabolical they have allowed him to have a sex change and diabolical that he could be freed this year. He may have changed physically but his brain is still the same.”
www.bbc.com/news/uk-39337805

‘Free Speech Bus’ against transgender culture is vandalized … with ‘trans rights now’ graffiti
March 24, 2017
A “Free Speech Bus” — a bright orange vehicle promoting opposition to transgender culture as it travels the eastern U.S. — was vandalized while passengers were inside the United Nations in New York City for an event Thursday.
Two people approached the bus — a promotion of the conservative National Organization for Marriage — and scratched it with a key, cracked its windows with a hammer and spray-painted graffiti on its side that read “trans rights now” and “trans liberation,” NOM president Brian Brown told USA Today.
The bus driver was with the vehicle, Brown told USA Today, and was tackled — but not hurt — by one of the vandals in an attempt to protect the bus. “This is a hate crime,” Brown added in a letter posted to the NOM website, “and sadly, the way that those who pretend to preach ‘tolerance’ feel about opposing viewpoints.”
Brown made no bones to the paper about the message of the bus: “Boys are boys and girls are girls — it’s very simple. We don’t want men in girls restrooms. We don’t want schools and our law attempting to say that people are bigoted simply because they understand that there’s a difference between male and female.”
www.theblaze.com/news/2017/03/24/free-speech-bus-against-transgender-culture-is-vandalized-with-trans-rights-now-graffiti/

And this is just a tiny fraction of the daily headlines we are now seeing. In more cheery times we could simply have mentioned the old saying, “Those whom the gods wish to destroy they first make mad,” and moved on. But this is serious business here folks.

As one writer put it, “Transgenderism is a dagger aimed at the heart of human identity”. The war against reality, against biology, against who we are as human beings is getting out of hand. For those of a religious persuasion, it is a direct assault on our Creator and the way we were created. In the beginning God made us male and female. He did not make us with gender fluidity or with a smorgasbord of sexual expression and choices.

To claim that our sex is just a social construct and that we can choose to be anything we want to be, with hundreds of options to choose from, if not more, is the height of presumption and rebellion against God and his good purposes and plans for humanity.

But with a real supernatural malevolent being opposed to God and his designs, we see him having a field day with the trans madness all around us. We need to resist all this on every level, including the spiritual level. For the sake of our children especially, we dare not cave in on this battle.

As Michael Brown has put it, “Let’s continue to look for ways to help those struggling with gender identity confusion while protecting the rights of the rest of society. If enough of us raise our voices, positive change will come.”
www.charismanews.com/opinion/in-the-line-of-fire/63750-how-is-it-fair-when-a-male-weightlifter-competes-against-women