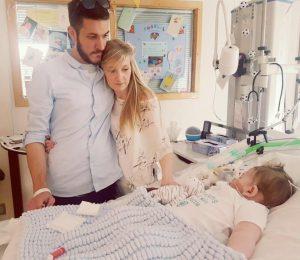 So now the parents have finally given up, and it is just a matter of time for the 11-month old boy to pass on. But even at this late stage the courts are still preventing the parents from bringing him home to die there. What a horrific story. I first detailed it here: billmuehlenberg.com/2017/06/30/little-charlie-gard-rise-statism-abolition-man/

While we must keep praying for his parents who have been through so much hell over the past few months, there are lessons to be learned here. Many in fact come to mind, such as the major shortcomings of socialised medicine, and the rise of the totalist state which has all power over life and death.

Let me look at these and a few other lessons that emerge from this tragic case. The cheapening of the value of human life of course does not arise out of a vacuum. Bad ideas lead to bad consequences, and bad ideas about what it is to be human will result in some really ugly consequences.

The Nazi death machine for example did not just appear out of nowhere, but was solidly based on various nefarious ideologies that preceded it. Ideas and worldviews promoting the survival of the fittest, and an entirely naturalistic view of life, contributed greatly to the eugenics movement in general and Nazism and the Final Solution in particular.

The gas chambers of Auschwitz were the ultimate consequence of the theory that man is nothing but the product of heredity and environment—or, as the Nazis liked to say, of ‘Blood and Soil.’ I am absolutely convinced that the gas chambers of Auschwitz, Treblinka, and Maidanek were ultimately prepared not in some Ministry or other in Berlin, but rather at the desks and in the lecture halls of nihilistic scientists and philosophers.

And consider some more ugly reality on how the medical and scientific community was up to their ears in all this. German historian Wendy Lower said this:

The first Nazi mass murderess was not the concentration camp guard but the nurse. Of all the female professionals, she was the deadliest. Centrally planned mass killing operations began neither in the gas chambers at Auschwitz–Birkenau nor in the mass shooting sites of Ukraine; they began instead in the hospitals of the Reich. The first methods were the sleeping pill, the hypodermic needle, and starvation. The first victims were children. During the war, nurses gave thousands of deformed babies and disabled adolescents overdoses of barbiturates, lethal injections of morphine, and denied them food and water.

A materialist worldview and a low view of life will readily lead to the concentration camps, as well as to experts telling us who should live and who should die. Indeed, already in Germany in 1920 an influential book penned by two doctors was making the rounds: The Authorization of the Destruction of Life Unworthy of Life.

The culture of death goes hand in hand with the naturalistic worldview. And we see that reflected in our media as well. One article which just appeared makes this very telling observation: the mainstream media seems far more worried about baby whales than baby humans – including those sentenced to death:

When it comes to the value of life, the networks are prioritizing a baby animal above a baby human – down to the very minute. During Tuesday morning’s news shows, the three broadcast networks combined spent more time on a 3-month-old orca’s death than on a 11-month-old British baby’s impending death.
As an infant, Charlie Gard was diagnosed with a rare genetic condition, mitochondrial DNA depletion syndrome, and could be removed from life support at any time. Parents Chris Gard and Connie Yates challenged his London hospital and the court system in a months-long effort to win permission to bring their son to the United States for experimental treatment. On Monday, they ended their legal fight to improve Charlie’s condition, because, as their lawyer put it, “time has run out.”
But the morning shows following the parents’ decision focused more on the death of an animal than on the approaching death of a human baby. And not just any baby – this is an infant who has won the support of Pope Francis, President Donald Trump, pro-life leaders, American politicians and medical experts and hospitals around the world.

But the media is in many ways a reflection of the surrounding culture. Sure, it often is setting the agenda, and is often at odds with majority opinion, but it is part of the decadent West which has long ago ceased to put a priority on human life.

The slow death of baby Charlie in other words is a mirror of the slow death of the West. John Zmirak has just penned a piece on this very issue entitled “Charlie Gard Is Dying, Like the West”. He writes:

Charlie’s fate is also a symbol. Not in the sense of an allegory, where the “sign” means nothing in itself. Where it’s just a marker for something else that’s real and important — like a fish as a code for Christ scrawled in a catacomb. No, what happened to Charlie and his parents is all too real. His story is a microcosm, a little world, in which we can see more clearly what’s poisoning the planet. To deny that, to refuse to learn the “big” lessons from this little, heartbreaking story, would be to render Charlie’s suffering almost meaningless. Imagine if the person who’d found Anne Frank’s girlish diary had thrown it in the fire.

When Charlie Gard dies, it won’t just be because of some “act of God.” Not even because of negligence. It will be an act of passive euthanasia on the part of the British government. Its health officials and courts denied Charlie’s parents their most fundamental right — to try every treatment within their means to secure his recovery. To decide what is best for him. To fight for the child whom God and nature entrusted to their care.
Why did they make this decision? As I wrote last week:
“’Life unworthy of life’ is almost exactly the phrase that British authorities used when (with European courts’ collusion) they ruled that Charlie Gard must die. That his parents couldn’t use the private funds they had raised to try to save his life. And why? Because he would still be handicapped. So the State thinks him better off dead. And the State decides these things.”
I’m not sure which motive is more fundamental here: The eugenicist’s urge to kill the handicapped, or the tyrant’s glee at usurping parental rights. But why choose between them? Those impulses go together. They are part of a broader, civilizational revolt against Nature.

Michael Brown has also written on this, and he shares the words of Charlie’s mother Connie, “We are so sorry we couldn’t save you. We had the chance but we weren’t allowed. Sweet dreams baby. Sleep tight our beautiful little boy.”

He then asks, “What is Charlie saying to us?” He offers four points:

First, Charlie reminds us that all human life is valuable, whether strong or weak, young or old, healthy or sick. As expressed in the mantra of the children’s story Horton Hears a Who, “A person’s a person, no matter how small.” How true….
Second, Charlie reminds us of the tenacity of a parent’s love. While we prayed and petitioned and cried from a distance, Charlie was his parents’ jewel, their own flesh and blood, their little champion….
Third, Charlie reminds us that the state cannot be the ultimate caregiver and the ultimate arbiter of life and death. (I’m not talking here about the courts sentencing criminals to their appropriate fate, whatever that may be. I’m talking about health care.)…
Finally, one last thought about the value of Charlie Gard’s life. It’s possible that by the time you read these words, he will have left this world without uttering a syllable. Yet his legacy will last for years, perhaps making an impact on nations, probably an impact far greater than if he had lived a normal, healthy life.
Here too we are reminded not to measure things as the world does but to measure things from God’s perspective. In His sight, what is insignificant to people can be of massive, eternal importance. And so Charlie, being dead, will speak for years to come. May we honor his legacy in word and deed.

Lest all this negative news becomes too overwhelming, let me offer a quick bit of good news, also involving the issues of life and death. Yesterday I wrote about the gung-ho push for legalised patient killing in the Australian state of Victoria: billmuehlenberg.com/2017/07/25/legalised-patient-killing/

But last night some good news appeared, which I think is a real move of God, and an answer to prayer. The second in command behind Premier Andrews has come out totally opposed to all this. As one news report stated:

Deputy Premier James Merlino has sensationally split from Premier Daniel Andrews, slamming Labor’s voluntary euthanasia laws as endorsing suicide and putting the vulnerable at risk. Mr Merlino on Tuesday night told the Herald Sun he would vote against the government Bill.
“I have deep concerns that these laws put at risk some of our most vulnerable Victorians, who could be subjected to coercion,” he said. “This Bill also endorses suicide, which is a line I don’t think our society should cross.”
www.heraldsun.com.au/news/victoria/deputy-premier-slams-labors-voluntary-euthanasia-laws-in-sensational-split/news-story/86f27412684076eba477cccc7950f9ef

So amidst a runaway culture of death, here we have a ray of hope. All those concerned about life must keep working and keep praying. We want to ensure no more horrific cases like that of little Charlie ever again emerge.