Courage can be contagious. When a few brave individuals take a principled stance for what is right and what is true and what is important, it can greatly help embolden others who may have preferred to sit on the fence or not rock the boat. Backbones are stiffened when real courage is on display.

On these pages I have written about many heroes who have been willing to stand strong despite all the hatred, all the bullying, and all the abuse they get as a result. And so very often the hate and ugly attacks come from those who talk the most about the need for tolerance, acceptance and diversity. 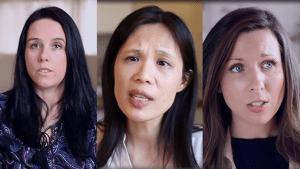 The militant homosexual lobby has led the way here, making it clear that anyone who dares to take a different point of view will be subject to their venom and rage. I have experienced this myself far too often, and I know how painful and dreadful it can be.

But I have made a point to devote my life to standing for truth and challenging those forces which would undermine what so many of us care so greatly about. Thus I expect all the abuse and opposition. It may not be pleasant but it goes with the territory. However, I do not expect three humble mothers to be on the receiving end of so much bitterness, hatred and contempt.

In the past few days three brave mothers have experienced more abuse, bigotry and vitriol than most of us ever will. I refer to Cella White, Pansy Lai and Heidi McIvor who dared to speak out in a short television ad on why retaining marriage as it has always been is so vital.

The 30-second ad warns about the very real negative consequences of redefining marriage out of existence. Everything said in the ad is perfectly true, and I have documented all this for many years now. The ad in question can be seen here: www.youtube.com/watch?v=KqXLfp2sFHQ

But it is as if the three came out saying we should torture kittens to death for the fun of it, or some such thing. The ferocious backlash was instantaneous and overwhelming. The homosexual lobby mobilised right away to have one and all go on a search and destroy mission against the three.

So it has been a hellish week for these three. But can I say that these three champions are far more courageous and committed to standing for truth than most people I know. They are some of the bravest women I have known, and I wish we had many more like them.

The story of the ad and the abuse the three have been getting has been making the rounds in the press. One article devoted to this story opens as follows:

A mother and church pastor who appeared in a controversial advertisement against gay marriage have been viciously trolled online. Heidi McIvor and her husband, Julian, who are both active members of the City Builders church in Sale, Victoria, have been accused of being behind an advertisement in their local paper.
The ad, published last week, also took a stance against same-sex marriage. Comments on social media directed at the couple ranged from taunts towards the family to threats against their church, despite the McIvor’s claims they had nothing to do with the ad, The Australian reported.
‘I hope he hasn’t got children that have his DNA,’ one local posted to Facebook. ‘Let’s burn their church,’ wrote another.

Despite the public and angry response her husband received after merely printing a newspaper advertisement, not writing it, Ms McIvor is not concerned about the backlash she may receive for her participation in the Coalition for Marriage’s television ad.
She told The Australian she was happy to debate the issue with ‘anybody’ if they approached her regarding her appearance in the advertisement. But the church worship leader slammed people who took a stance against her without participating in a rational conversation.
‘What does worry me… is that it seems no one can put forward an alternative opinion about marriage without it descending into personal attacks and threats,’ she said.
The McIvor family are not the only ones to face backlash for their contribution to the same sex marriage debate.
Cella White, who appeared on the Coalition for Marriage’s television ad alongside Ms McIvor, has also faced public shaming, with the principal of her son’s school slamming her claims as lies. Ms White said during the commercial that her son had been told he could wear a dress to school if he felt like it. The mother-of-four had shared the story on a national scale previously, while appearing on an episode of Q&A early last year.

We used to live in a democracy where various points of view were allowed a polite hearing. But today there simply are certain things you just cannot say. You cannot say anything critical of the homosexual lobby, of the push to redefine marriage, or the need to protect our children from radical social engineering agendas.

All that seems to now be verboten. Thus I am so thankful that groups like the Coalition for Marriage exist, and that they are willing to take all the time and effort to produce ads like this. Is the ad perfect? Of course not. But let’s face some reality here.

Such ads are extremely expensive to produce, and we have had little time to devote to all this. The vote on homosexual marriage is coming up real quick. Yet sadly there have been plenty of Christian critics who have attacked the ad and those who made it. Sure, more ads would be nice and it would be good if other aspects of the debate could be covered.

But all this takes even more time and money – something our side is always quite short on. Thus I really have had enough of all those armchair critics and Christian leaders who sit back and take pot-shots at these three, the ad, and those who are fighting for God’s institutions of marriage and family the best they can.

These dime-a-dozen critics grieve me greatly to be honest. Just whose side are they on anyway? It is almost as if they prefer the other side. Maybe they should just produce their own ads if they so dislike what is now out there. Perhaps it is a case of put up or shut up.

There is an old Latin phrase that some of you may know: Athanasius Contra Mundum. It means “Athanasius Against the World”. It refers to the fourth century church father who bravely defended Christian truth as it was under ferocious attack.

Five times he was forced to go into exile from his church in Alexandria as he defended Christian orthodoxy. It really was a case of him against the world. These three women now know something about that. It really does seem like it is Heidi, Cella and Pansy against the world.

So please, please pray for these three courageous women and their families. They need all the prayer, help and support they can get. They are going through hell right now because of the rainbow hate squad. It seems that at least one of the three has already been forced to take down her Facebook page because of all the frenzied attacks.

Pray for the protection and safety of these three. Pray that they will continue to stand strong. And pray that the weak, cowardly and compromised church begins to wake up, get some Holy Ghost backbone, and join these three in one of the most important social, moral and spiritual battles of our time.

32 Replies to “Three Brave Mothers Against the World”