Leadership is in short supply nowadays – at least good leadership. There are plenty of leaders, but very few strong, principled, reliable and honest leaders. Corrupt and derelict leadership abounds, but decent leadership that can inspire people and result in good outcomes for most folks seems to have disappeared.

I have not bothered to write about one such leadership crisis which has all of Australia talking, and much of the world as well. And it was not about political leadership but mere sports leadership. Yet in a nation that has far more people worshiping at a sports ground each week than in a Christian church, this has become massive news. 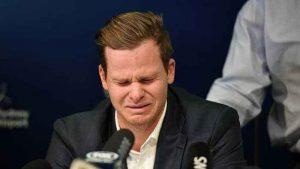 The cricket ball-tampering scandal is still being talked about everywhere, even though the story is now a week old. Front page headlines are still all about it, with the latest being Warner’s press conference this morning and another show of tears. Whether his tears and those of others are real or not may be a moot point.

So far four major scalps have been taken over this debacle. Sure, some are just for a period, and we may see some of these four back in action in a year or so. But the South African episode will forever remain a scar in Australian sporting history.

And whether the displays of sorrow and the asking of forgiveness is merely because they were caught in the act, or because they see the seriousness of their wrongdoing is an open question. Hopefully some of the tears we have seen, as with captain Steve Smith, was genuine remorse and a real display of acknowledging the wrong that was done.

And from a Christian point of view, we know that often a major crisis in a person’s life can lead them to really examine their priorities, and hopefully get into right relationship with God. We should pray for all these men and hope that they do indeed come to Christ and find new life in him.

And of course one can repeat the words of various commentators as to why we have made so much about a game, when political leaders seem to get away with murder every week, yet we hear next to nothing about that. Our values and priorities as a nation seem to be rather twisted indeed.

One newspaper article that appeared today offered some wise words on all this and is worth quoting from. Patrick Smith had a terrific piece entitled “Ball-tampering scandal: Lack of leadership spreads rot through the nation”. He is quite right to see the big picture here, and remind us of the failure of leadership that is all around us.

Concerning the actual cheating he writes:

As the news broke, the story spread across the globe marginally quicker than reports that Kim Kardashian gorged on two sticks of celery that morning. But rightly, most of the cricket reaction was outrage. There were some outliers in nincompoop land. One commentator said the hysteria made no sense to him, it was only ball-tampering after all and then followed that up with a question along the lines of, by the way, “what is ball-tampering?” Out, caught credibility, bowled pomposity.

This was more than a single example of ball-tampering: for example, Mike Atherton. This was the captain and the vice-captain conspiring and instigating a serious, hopefully clandestine, breach of the rules. It was a treachery to defraud the game of cricket, to win by cheating. To shame a nation. To disrespect the game. That is the very top man Smith, down through the second most important team member in his vice-captain Warner to the bottom of the batting order of power, Bancroft, the latest man added to the Test team. From the very top to the very bottom. Culture, what culture?

But then he goes on to look at the bigger picture, and he is spot on with his analysis:

Apart from the money, in bundles so big it could not fit in their travel bags, the players seemingly had no role models, no one to show how mature men and women handle themselves in deteriorating circumstances. In truth, Smith and Warner had no idea how to lead. Not a twig of an idea and we said so the day before the last Test. Voila.

But that paucity of leadership has gradually rotted just about every team in every sport. The way our federal and state politicians act points to a few tracks of redemption but none are reliable and certainly none trod by our pollies.

Watch the so-called leaders of this nation and you will see only this: a group of gluttonous men and women who flip and flop, not on principles but the search for power. Vanity and self-importance. Two days in the news. All this is creating a very ordinary nation. Timid, without vision but prepared to get what they want with no consideration of the ramifications. That is the Australian cricket team; perfectly shaded representatives of modern Australia.

It is time for us to set the future parameters, to uphold standards the politicians are too scared of just in case it might lock them out of power. In this we could all lead the way, demand change and seek honesty from those who represent us in politics or in sport.

And the church as well

But it is not just in the political world and the sporting world that we see a crisis in leadership. Sadly we see it all over the place in our churches as well. It seems cancerous leadership is rife in so much of the Christian world alas. Let me offer just two brief examples of this.

Ten years ago J. Lee Grady wrote an important critique of the charismatic and Pentecostal churches – a movement he is a part of. You can see my review of The Holy Spirit is Not For Sale here: billmuehlenberg.com/2010/07/02/a-review-of-the-holy-spirit-is-not-for-sale-by-j-lee-grady/

Here I want to feature just a tiny portion of that book: “The truth is that this current generation of church leadership has rendered itself powerless when facing the Goliath of sexual compromise. . . . The church’s leadership has become a demonic nest of unspeakable immorality”. And here he was limiting his remarks mainly to the charismatic world, not to all of the church.

My second example of this comes from some recent Christian headlines. I seem to have gotten myself on the Christianity Today email list, and it seems once a week they list some of the latest articles they feature. The email that came yesterday offered 12 such articles, but I noticed that a full third of them were about leadership failure in the church! The four cases were as follows:

-Bill Hybels Accused of Misconduct by Former Willow Creek Leaders
John and Nancy Ortberg, others confront megachurch with its own #MeToo moment. “The charges against me are false,” says Hybels of former friends’ “collusion.”

-We Need an Independent Investigation of Sovereign Grace Ministries
Allegations of child sexual abuse and staff cover-up continue to swirl. Let’s set an example for all churches to follow, bringing healing to victims and churches alike.

-#ChurchToo: Andy Savage Resigns from Megachurch over Past Abuse
Memphis pastor who faced backlash after standing ovation: “Apologies are important, but more is required.”

Wow, four out of twelve, and that is just one week’s worth of church headlines. No wonder the church is in such a mess. Leadership in the churches seems to be just as bad as in the world. While these headlines have to do with the American scene, we have had our share of church leadership failures and scandals in Australia as well.

It is said that people will get the leadership that they deserve. If that is the case we are in a very bad way indeed. Forget about the sporting leadership and its failings. When we have derelict and decrepit leaders in politics, and worse yet, in the churches, then we may well be under the judgment of God.

14 Replies to “Where Are All the Leaders?”