By now most of you should know about how Sarah Huckabee Sanders and a few others were munching on some cheese snacks while waiting to be served at the Red Hen restaurant in Virginia. When “concerned” staff realised the evil Trump Press Secretary had invaded their safe space, they asked the owner Stephanie Wilkinson, a card-carrying leftist, what they should do. The answer was as brief as it was draconian: kick them out!

Sarah did not throw a hissy fit. She did not threaten to sue them. She did not take anyone to court. She did not stay there and cause a stink. She politely got up and walked out. This tells us all we need to know about her, and her political opponents. 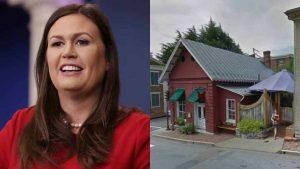 As Sanders said in a tweet: “Last night I was told by the owner of Red Hen in Lexington, VA to leave because I work for @POTUS and I politely left. Her actions say far more about her than about me. I always do my best to treat people, including those I disagree with, respectfully and will continue to do so.”

Yep. Not that long ago blacks were not allowed in many places, including restaurants. If they got on a bus, they had to go to the back of the bus. Now conservatives and Republicans have to do the same it seems. The double standards and hypocrisy of the left is completely off the charts here.

When Christian cake makers regularly and cheerfully serve homosexuals, but draw the line at specially designed requests like a homosexual wedding cake, the left goes ballistic, the activists drag people to the courts, and many Christian-owned businesses have had to close down.

They SEEK confrontation and they seek division. They know just what they are doing. It is all part of their program to shut down ALL opposition to their militant agenda. This is how the left operates. This is standard procedure for the left.

But when a Republican walks into a restaurant, she and her party are kicked out. Hmm. The owner of Red Hen tried to justify her bigotry and hate by saying she had to do that which was morally right – at least in her eyes: “We just felt there are moments in time when people need to live their convictions.”

Um, was that not what the Christian florists, photographers, bakers and all the rest were simply trying to do? To stay true to their moral convictions? To remain steadfast to their basic core values and beliefs? The left absolutely blasted all these people for daring to live lives based on moral conviction.

But if you are a leftist business owner, then it is perfectly acceptable to remain true to your beliefs, and to discriminate against others. Um, double standards much? And again, let’s not mix apples and oranges here. As I said, these Christian small business owners regularly and routinely served lefties, homosexuals, Democrats, and others.

It is only when a special order for something like a lesbian wedding cake is asked for that the owners feel the need to say no. And given that there were plenty of similar businesses nearby, those asking for the special order could easily have gone elsewhere.

But they deliberately targeted these Christian businesses, knowing they could trap them and make a massive media stink about “discrimination” and the like, even though these were hardly cases about genuine discrimination. However, with the Red Hen, this WAS an obvious and blatant case of discrimination.

As Lauren DeBellis put it:

Both The Red Hen’s owner and many others are pointing to the recent Supreme Court decision that ruled Masterpiece Cakeshop did not have to make an off-the-menu cake for a gay wedding to justify kicking Sanders out of the restaurant. However, there is no comparison. For that logic to work Sanders would’ve had to order food that wasn’t on the menu and then use the government to try and force them to make what she wanted.
www.foxnews.com/opinion/2018/06/24/red-hen-teaches-sarah-huckabee-sanders-that-virginia-is-for-pc-bullies-not-for-lovers.html

When it comes to the issue of using a business or providing a service, the double standards of the left are always in full view. For example, Chick-Fil-A is a Christian-run chain of chicken restaurants. Because the Christian owner was pro-marriage, but not pro-fake marriage, the leftists went nuts and sought a national boycott.

That is their right. But their attempt to take the high moral ground, and seek to see it shut down altogether is just part and parcel of the totalitarian nature of the left. Their idea of “tolerance” always has a totalitarian sting in the tail. Plenty of other examples could be mentioned here.

So two African American guys go into Starbucks, don’t order anything, and they ask them to leave. The media and the leftist movement has a field day against Starbucks. So Starbucks shuts down all their stores for a day to make all employees go thru diversity training. Sara Sanders goes into a restaurant and they ask her to leave because she works for the White House. Why isn’t the media mad about this? Because she’s a white woman that works for Trump? Where are the feminist movement supporters? Yes, an establishment should have the right to refuse service. However, that got thrown out with the dishwater. Now you can only refuse service to those that disagree with the progressive/communist agenda.

Or as Jeannie DeAngelis put it:

Wasn’t it just a few months ago that two men loitering in a Starbucks, who happened to be black, asked to use the restroom and were arrested after they refused to free up space for paying customers? Didn’t bias allegations and diversity training result from the incident? Now, Sarah Huckabee Sanders, a paying customer, is refused service because of her religious and political convictions and bigotry is entertained as moral conviction?
www.americanthinker.com/blog/2018/06/red_hen_bigotry_or_moral_conviction.html

Yes, I also believe that there may be a place to refuse service in certain cases. As I said elsewhere:

Thus I am not against a small business owner being somewhat selective in what services they provide. But what I AM against is all the blatant and appalling hypocrisy going on here. What we see at Red Hen is nothing but obvious ideological and political bigotry. It was a clear-cut case of discrimination. Again, if the owner wants to treat others like dirt in this way, it is up to her I guess.

But I am sick and tired of hearing the loony left going on and on about the evils of discrimination and the like. There is no bigger group to be found in the discrimination camp than the left. They specialise in this. And at the same time they constantly moralise about it.

They are stinking hypocrites, and most people are now seeing through their disgusting double standards. Let me finish with the concluding words of Rod Dreher on this incident:

Who does this help? I’ll tell you who: Donald J. Trump. Conservative people see this, and they imagine themselves being thrown out of a restaurant, either by the owner or by left-wing protesters, because they are conservative. They see themselves being driven out of the public square by the left — which all the while congratulates itself on its superior morality — and it makes them furious. For the woke left, even trying to eat out with your spouse and your friends at a restaurant is now political, and must be punished.

A Washington Post caption under a photo of the restaurant reads: “A placard quoting the Rev. Martin Luther King Jr. — ‘Love is the only force capable of transforming an enemy into a friend’ — sits in the window of the Red Hen, which opened in Lexington in 2008.”

They don’t believe that at the Little Red Hen. They like to think they do, but they don’t. I wonder how things might have gone if Wilkinson had asked Sanders for a private word after dinner, or had sent over a round of dessert, and come by the table to talk. I don’t think it’s a restaurant owner’s place to address the politics of their customers, but at least that would have been better than throwing them out. (And yes, I would feel exactly the same way if a right-wing restaurant owner had treated Hillary Clinton’s staff so rudely.)
www.theamericanconservative.com/dreher/sarah-sanders-little-red-hen/

I think it is perfectly clear that from now on to speak of the hypocritical left is as much a tautology as to speak of unmarried bachelors.