I write this piece while just several hundred miles from the Canadian border. That is because I am enjoying a short visit to Wisconsin at the moment. While it is great to be back, it is frightening to think just what is happening so close by. I am fully aware of how bad things are in Canada when I am in Australia, but it becomes even more ominous when being so close by.

Canada has long had some serious problems when it comes to faith, family and freedom. All three are under sustained attack there, both by federal and provincial governments. I just did a quick check of my website and I have around 180 articles that discuss Canada – in part or in full. And most of those pieces would feature some very scary material indeed. 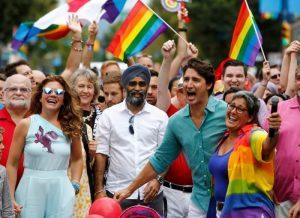 Just this past week or two we have found another raft of cases involving the war on children, conservatives and Christians in Canada. As is so often the case in the culture wars, most of these episodes have to do either with the radical sexual agendas or with creeping sharia.

These are two of the main battle fronts that we find all throughout the West, and they are certainly leading the way in Canada. Consider just these five recent cases. The first has to do with the radical trans agenda which Prime Minister Trudeau and his government along with most provinces have been pushing relentlessly.

It is another direct attack on families, on parental rights, and on the well-being of children. As one report covers the story:

Canada’s Ontario province has passed legislation that allows the government to seize children from families that refuse to accept their child’s chosen “gender identity” or “gender expression.” The so-called Supporting Children, Youth and Families Act of 2017, or Bill 89, was approved by a vote of 63 to 23, according to The Christian Times.

“I would consider that a form of abuse, when a child identifies one way and a caregiver is saying no, you need to do this differently,” Minister of Child and Family Services Michael Coteau, who introduced the bill, was quoted as saying. “If it’s abuse, and if it’s within the definition, a child can be removed from that environment and placed into protection where the abuse stops.”
www.christianpost.com/news/ontario-passes-law-government-seize-children-parents-oppose-gender-transition-186332/?fbclid=IwAR3rezwdPJtqXXb8Wo9WA3RtX_DjdQR-VSPvunbNnOxCOs60Q4mZmbStqlE

To see how all this plays out in the real world, see how one Canadian father fared as he sought to side with biology and reality and stand against the ugly militancy of gender bending fantasy:

Last week, Justice Francesca Marzari of the Supreme Court of British Columbia, Canada, declared a father guilty of “family violence” against his 14-year-old daughter on the sole basis that he had engaged in “expressions of rejection of [her] gender identity.” These “expressions” revolved entirely around his polite refusal to refer to his daughter as a boy in private, and his steady choice to affirm that she is a girl in public.

As previously reported, the BC Supreme Court ordered in February that 14-year-old Maxine receive testosterone injections without parental consent. Accordingly, Maxine began regular injections at British Columbia (BC) Children’s Hospital over the course of the last two months.

Her father, Clark, strongly objects to this treatment and immediately sought to reverse the decision in the BC Court of Appeal. Hoping to raise awareness of his case, Clark gave a number of interviews to media outlets, including The Federalist. In these interviews, he repeatedly referred to his daughter as a girl, stating to The Federalist that “she is a girl. Her DNA will not change through all these experiments that they do.”

While many might take this to be an honest statement of biological fact, Marzari quoted it as a prime example of Clark’s “family violence of a public denial of [Maxine’s] gender identity.” Marzari convicted Clark of this violence, and issued a “protection order” preventing him from speaking to journalists or the public about his case.
thefederalist.com/2019/04/24/father-gagged-found-guilty-family-violence-calling-trans-daughter/?fbclid=IwAR2_y3elJu1fx9i5so4sLR-jj0e6qALL6ZAxRRLlumhqf7khYLviJgzaylU

Wow, that should send shivers up the spine of any and every parent in Canada. This is so shocking and diabolical. Just what is wrong with people there that they can destroy families like this? One really feels for this poor dad. How many other parents are going through this now – or will go through it soon enough?

But my next case is no better. In another Canadian province more of this madness continues to spin out of control. Consider this report:

On March 20, 2019, Bill 84 was introduced in the Ontario Legislature. It is a Private Member’s Bill, introduced by York Centre MPP Roman Baber. The bill passed second reading at the end of April, and is now before the Standing Committee on Justice Policy. The bill is entitled Prohibiting Hate-Promoting Demonstrations at Queen’s Park Act, 2019. The bill provides that no demonstration, rally or other activity that, in the opinion of the Speaker, is likely to promote hatred against any identifiable group, shall be permitted on the legislative grounds.

No reasonable or rational person accepts or agrees with the deliberate spread of “hate”. It is unacceptable in a civilized society. The problem with this bill, however, lies in the fact that the definition of “hate” is uncertain under Canadian law. As a result, unfortunately, the use of the word “hate” can be a useful tool for some to prevent differing views from being expressed. That is, the word “hate” can be used to silence opposing views expressed when, in fact, the views are simply a reasonable expression of belief.

This concern is based on actual experience. Canadians have already experienced the contempt shown by the Supreme Court of Canada towards Section 2 of the Charter of Rights which provides for freedom of opinion, expression and religion.
www.lifesitenews.com/opinion/ontarios-bill-84-threatens-to-criminalize-christian-speech-as-hate?utm_source=LifeSiteNews.com&utm_campaign=eb3f8316a5-Daily%2520Headlines%2520-%2520U.S._COPY_500&utm_medium=email&utm_term=0_12387f0e3e-eb3f8316a5-401398773

And the militant sexual revolutionaries in Canada are not content to destroy that nation. They want to export their radical ideologies and agendas overseas. Check out this frightening story:

Justin Trudeau continues to lavishly bestow our hard earned tax money on his favourite people – feminists and homosexuals. Both groups are swimming in Trudeau’s largesse. It is grim enough that Trudeau has poured millions of tax dollars into the homosexual cause within Canada, but now he is expanding his generosity to provide Canadian tax dollars for homosexuals residing worldwide. This is in accordance with his promise, at the time he was elected in 2015, that he would make the promotion of LGBTQ a central pillar of Canadian foreign policy.

In pursuance of this policy, in February, 2019, the Trudeau government announced $30 million in funding over five years, followed by $10 million per year to advance the human rights and socio-economic outcomes for LGBTQ people in developing countries. This money is to be used to support local and regional homosexual organizations and “equality” movements in the developing countries for the advancement of their policies.

In addition, in January, 2017, Canada, along with Chile, became co-chair of the Equal Rights Coalition, an intergovernmental coalition advancing LGBTQ rights. Canada is one of several Western countries that is supporting LGBTQ through embassies and missions abroad. As a result, Canadian embassies are now including, among their duties, the promotion of the homosexual cause, regardless of the religious beliefs and cultures of their host countries.
www.realwomenofcanada.ca/trudeau-funds-homosexuals-abroad/

But as mentioned, it is not just hyper-radicalised sexual politics that is being championed in Canada. There is also the cosying up to Islam, by living in denial about stealth jihad and creeping sharia. Full-scale Islamophilia is taking place there, with Trudeau leading the charge to elevate Islam while he denigrates Christianity.

Check this out – the headline is frightening enough: “Canada: Trudeau government omits all references to ‘Islamist extremism’.” Part of the article says this:

Canada is in deep trouble at the hands of an appeasing government which refuses to identify its worst enemies; a government which also lead the charge on the UN Migration Pact, supports open door immigration and has gone so far as to even welcome Islamic State jihadists, because in Trudeau’s mind they can be “a powerful voice for deradicalization”.

Although the Trudeau government also enraged India over removal of the term “Sikh extremism“, it is pertinent to understand that there is no global war on terror against Sikhs. It is contained within a region, much like many other faction wars, for example, in skirmishes involving the Irish Republican Army and the war with the Tamil Tigers that Sri Lanka ended 10 years ago, but has still left scars etc. The global war on jihad terror however threatens all infidel countries. It is a 1400 year violent and stealth war based on conquest and Islamic supremacism. The Trudeau government’s recklessness in failing to identify–and thus target–the biggest threat to Canadians, merely allows that threat to proliferate and further threatens public safety. It also poses a clear risk to its neighbor, the United States. Such an approach is as preposterous as omitting references to Nazism and Communism during the height of wars against both forces of totalitarianism.
www.jihadwatch.org/2019/05/canada-trudeau-government-omits-all-references-to-islamist-extremism

Any one of these five cases alone would be bad enough, but taken together – and added to all the others – this is very worrying indeed. Canada has fallen so far, so fast. It seems only a mighty avalanche of prayer, repentance and revival can turn things around.

That, and Canadians waking up and booting these militants out of office. There is a national election coming up on – or before – October 21. Hopefully the Canadian people have seen enough horrors from these radical secular left rulers and will vote them out. If not, it might be time to say goodbye to Canada.

14 Replies to “Stay Away From Canada”