The main way to fight evil is to first become fully aware of its ugly reality.

When we want to defend something that is so blatantly horrible and evil, we resort to euphemisms. Those involved in great evil always tell lies about it, while those seeking to expose these evils will shine the spotlight of truth on it. That is exactly what must be done in the abortion battle.

Instead of calling abortion what it really is – baby killing – we talk about “a woman’s right to choose” or “reproductive rights” and the like. Covering up the ugly reality of abortion is one way to proceed. A far better way is to tell the truth about abortion. For too long we have allowed deception and falsehoods to cover up what is really going on in the sordid world of the abortion mills. 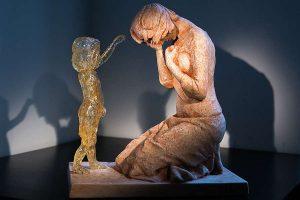 It does not take much to see the gruesome reality of abortion. Sure, most of the mainstream media outlets will never spill the beans here, but plenty of other sources can be utilised. We must inform ourselves – and others – of the truth about this modern-day genocide.

To help us in this regard, here are three recent examples of the fiendish evil that occurs in this diabolical industry. These cases are just the tip of the iceberg, but they do give us some clear indications as to what really takes place within the ghoulish abortion mills.

The first case involves an abortionist who has just passed away (he got to live far longer than his victims). What was discovered at his home was utterly grotesque. As one article states:

The remains of more than 2,000 fetuses have been found at the home of an abortion doctor who died just 10 days ago. The 2,246 fetal remains were discovered in the home of Dr. Ulrich Klopfer in Will County, Illinois. Klopfer died on September 3 and it was while family members were going through his home that they found the medically preserved fetuses.

An attorney for the family was said to have contacted the coroner’s office on Thursday about the discovery. It was estimated that he had performed tens of thousands of abortion procedures in multiple Indiana counties for decades, making him ‘likely’ to be the state’s ‘most prolific abortion doctor in history,’ according to the South Bend Tribune.

There is currently no evidence to suggest abortions were carried out at the property, authorities said. The doctor had performed abortions at Women’s Pavilion in South Bend, Indiana, until his license was suspended in 2016 for failure to exercise reasonable patient care and violating multiple notice and documentation requirements, according to the South Bend Tribune.
www.dailymail.co.uk/news/article-7462939/Remains-2-000-fetuses-home-former-abortion-doctor.html

Wow. What sort of person keeps thousands of dead babies in his home? It is clear that the heart, soul and conscience of a person can grow stone-cold when he or she is involved in such a horrific ‘profession’ as this. They lose their own humanity as they snuff out the lives of so many innocent little babies.

My second case is just as appalling and ghastly. It comes from an ongoing criminal case against pro-lifers David Daleiden and Sandra Merritt who had worked tirelessly to expose the evils of Planned Parenthood. The overall story itself goes back some four years, and I have written about it often, eg: billmuehlenberg.com/2015/07/15/planned-parenthoods-deadly-baby-trade/

But now these two fearless investigators are still being raked over the coals for what they did to expose the ugly abortion industry. Consider some shocking recent revelations as discussed in the court case:

The CEO of StemExpress essentially admitted in court Thursday that her biotech company supplies beating fetal hearts and intact fetal heads to medical researchers. She also admitted at the preliminary hearing of David Daleiden and Sandra Merritt of the Center for Medical Progress that the baby’s head could be procured attached to the baby’s body or “could be torn away.”

“That is an especially gruesome admission, but it begs the question: how did they get these fully intact human children?” says Peter Breen of the Thomas More Society, which is representing Daleiden at the hearing. “If you have a fetus with an intact head and an intact body, and intact extremities, that is something that would indicate that child was born alive, and then had their organs cut out of them, or that that child was the victim of an illegal partial-birth abortion,” he told LifeSiteNews. “Both of these are gruesome and violent acts.”

CMP’s Daleiden and Merritt are charged with 15 felony counts of illegal taping of confidential information in connection with undercover videos they released in 2015 after a three-year covert investigation into the buying and selling of baby body parts, which is a felony.
www.lifesitenews.com/news/stemexpress-ceo-admits-selling-beating-baby-hearts-intact-baby-heads-in-daleiden-hearing

One can only compare this to something like the medical experiments of the Nazis. The same callous disregard for human life and the same satanic agendas are at work here. Both groups have declared entire classes of people to be not worth living. Both are guilty of mass slaughter and unspeakable crimes against humanity.

But both these cases have to do with large groups of victims. Let me narrow things down to just one tiny life, to help us see the real face of the abortion terror. This is a story that is horrific in detail, but it is something that happens routinely in the abortion killing fields:

This week, at a hearing on Capitol Hill on the Born-Alive Abortion Survivors Protection Act, Congressman Chris Smith, chair of the Pro-Life Caucus, issued the following statement:

“In a Florida abortion clinic, Sycloria Williams delivered a live baby girl at 23 weeks. The clinic owner took the baby who was gasping for air, cut her umbilical cord, threw her into a biohazard bag and put the bag in the trash. Heartbroken, Sycloria later had a funeral for her baby girl who she named Shanice. In Sycloria’s home state of Florida, in just one year—2017—eleven babies were born alive during abortions. Shockingly only six states—Florida, Arizona, Michigan, Minnesota, Oklahoma and Texas—currently require the reporting of children born alive who survive abortion. Why the coverup?”
www.lifenews.com/2019/09/13/baby-born-alive-at-23-weeks-was-gasping-for-air-abortion-clinic-put-baby-in-a-bag-threw-her-in-the-trash/

These stories are fully representative of the ugly world of abortion. They can be repeated time and time again. They are not unique or aberrational – they are what the abortion industry is all about. This is what the abortionists do for a living – no pun intended. They get rich by taking innocent human life.

I already mentioned that comparisons with the Nazis is fully legitimate here. There are far too many similarities and parallels between both groups. Let me remind you that there were some brave souls who risked everything to stand against the evils of Hitler.

They were few in number, but their names – if known – are forever immortalised. Let me mention a small group of German young people who are clear examples of this. Sophie Scholl was beheaded by the Nazis at the age of 21. She gave her life for standing against evil, and she paid the price for it. So did her brother, and some other young people. You can read about them here: billmuehlenberg.com/2018/07/30/notable-christians-sophie-and-hans-scholl/

Let me close with the words of young Sophie. I urge you to read them, read them again, and prayerfully ask God to speak to you personally and powerfully:

The real damage is done by those millions who want to ‘survive.’ The honest men who just want to be left in peace. Those who don’t want their little lives disturbed by anything bigger than themselves. Those with no sides and no causes. Those who won’t take measure of their own strength, for fear of antagonizing their own weakness. Those who don’t like to make waves – or enemies. Those for whom freedom, honour, truth, and principles are only literature. Those who live small, mate small, die small. It’s the reductionist approach to life: if you keep it small, you’ll keep it under control. If you don’t make any noise, the bogeyman won’t find you. But it’s all an illusion, because they die too, those people who roll up their spirits into tiny little balls so as to be safe. Safe?! From what? Life is always on the edge of death; narrow streets lead to the same place as wide avenues, and a little candle burns itself out just like a flaming torch does. I choose my own way to burn.

God bless you Sophie. Who will join you in opposing the modern abortion holocaust – the greatest moral evil of our time?

16 Replies to “Do Not Look Away: Gruesome Abortion Realities”