Anti-Christian bigotry and persecution is rapidly rising in the West. How will you respond?

I have been writing and speaking a lot lately about the descending darkness in the West, the ramping-up of anti-Christian bigotry and persecution (and yes, being kicked out of your job and/or being forced to pay huge fines IS a type of persecution), and how Christians might respond.

I have been telling folks that we very soon will have to make a choice – a very serious choice. Will we stand for Christ and truth, and be willing to accept the consequences, or will we cave in, compromise and capitulate to try to appease the militants? 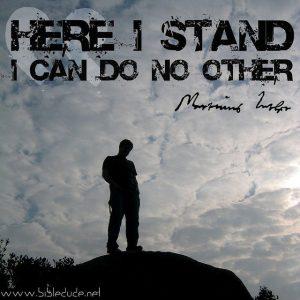 In other words, will we seek to save our own necks (and even do good things, such as seek to feed our families), while effectively denying Christ? These are tough choices indeed since we all want to provide for our loved ones. But as things heat up and our options lessen, we must start thinking now about what we will do in such situations.

Recently a few of us were chatting about this very thing. One of the guys asked about a hypothetical, wondering what I would do if I was put on trial for hate speech because of my books on homosexuality. My immediate reply was, “Here I stand, I can do no other.”

Of course I am no Luther and this situation is rather different. But that is my position – I will not cave in. Another person asked if I would defend every sentence in those books. I replied: ‘Why not? Should I grovel for forgiveness, delete half of what is in those books, and promise to be good?! Once you play their self-censorship game, you have lost – you might as well then just admit that they are right.’

If we start bowing to their demands, then we are saying we basically agree with the totalitarians that they have the right to control our very thoughts and speech. Then we have put up the white flag of surrender for good. When we start capitulating here, caving in there, compromising and giving ground, we simply let the other side win.

All that we achieve when we start to bow before them is embolden them to demand even more of us. Such capitulation tells them that we really do not have the guts to stand up for what we believe. Like circling sharks, the more blood they see, the more frenzied they become in their attacks.

I for one will not go down that path. We must not fail to understand what we are up against. If we think that deleting a few paragraphs here or altering a few sentences there will somehow placate the militants, we are living in dreamland. Books like mine are totally anathema to them.

It is NOT a question of making some changes – or even many changes: it is a question of having the book renounced, apologised for, and then destroyed. That would be the endgame of the militants. They are not into compromise – they are into complete dominance.

I mentioned to these folks that they should read the latest writings of Bernard Gaynor. The Queensland Christian has known hardcore persecution from the militants for years now, and it has been enormously costly for him. His most recent piece on the Israel Folau case is well worth reading. Let me quote some of it here. He begins:

The stone, cold reality is that all the Folau saga has proven is that if you quote from the Bible, you will lose your job. Because Folau has lost his job. This reality is best outlined in an article on this controversy by the Sydney Traditionalist Forum:

“Given the questions raised by this controversy (freedom of speech, public religious expression, the extent and enforceability of corporate speech codes on private conduct) it should have been an objective of Folau’s backers to have these ventilated in a court of law. Instead, current outcome offers no resolution, no precedent, and in no way has it secured the civil liberties of people who fall out of favour with Acceptable Opinion. The frontlines of the Culture War have moved precisely nowhere. Indeed, the fact that Acceptable Opinion on matters relating to sexual morality has not suffered a dent to its hegemony can only be interpreted by the right-minded as a de facto win for the ideological left.”

In other words, this is not what victory looks like. Sure, it’s fun making jokes about Raelene Castle and it seems likely from all the media reporting that Folau has been paid something to disappear. But so what? This only proves that, if the administration is incompetent and you have a high profile, you might get something to go away. But you will still be exiled.

It’s hardly comfort for the quiet Australians who simply cannot muster anything like the media coverage or support that Israel Folau did. The reality is that, quite apart from not being a victory, this was also a massive lost opportunity.

He goes on to talk about his own battles with homosexual activists and the Australian Defence Force:

Now Defence is pursuing me for almost $750,000 in legal costs. It has already spent almost $30,000 just preparing its costs claims against me when it knows that it can’t wring much more than $1,500 out of me. Everything I owned has already been consumed in this battle.

As taxpayers, you should all be outraged that the Chief of Defence Force is so wantonly and maliciously wasting your money for absolutely no purpose at all. I suppose its small change for a large organisation – especially when it is funded by you and me – but it highlights exactly how difficult it is for ordinary Australians to build the firepower that they need to defend themselves.

Israel Folau had the chance to do something really great for Australia. But he didn’t seize the moment. For once, all the elements for a successful fight were in place. But that firepower has not been used. Instead, it is now being de-stockpiled.

And that means we are all now relying on some unknown little person to have the courage to fight a harder battle sometime in the future. And then, somehow, to win it. We are looking for a miracle. Like I said, this is not what victory looks like… bernardgaynor.com.au/2019/12/06/folau-what-does-it-all-mean/

I said some similar things a few days ago in my own piece on the Folau saga:

Does it take heaps of money to get such apologies and to see such settlements come about? It is one thing if you happen to be wealthy, and have some wealthy and influential backers arguing your case for you. But what about the little guy?

What about those with no or very little resources of their own? Simply paying for legal help can mean an ordinary Joe such as myself would have to mortgage or sell the family home. Most of us just could not have gone as far with something like this as Izzy did….

So this particular story is NOT over, nor are the culture wars. They will keep on going. It is possible more clarity about the settlement will emerge over the next few days, but until then, plenty of questions remain. I am not even sure if I can say at this point who was the winner here – if anyone. billmuehlenberg.com/2019/12/04/questions-about-the-israel-folau-settlement/

The truth is, there are plenty of these little guys out there who have already suffered at the hands of the militants. I know of a number of them personally. They have either lost their jobs or been hit with massive fines. And it is just a matter of time before I am directly targeted.

In my recent discussion one fellow said that at least I am free to say what I like, since I am not working for anyone else. I replied with these thoughts:

No, not really. At any moment the powers that be will demand that I shut down CultureWatch, recant, and promise never to ‘sin’ again. I will refuse, and then jail or a heavy fine may well be the result. So the end is the same, whether or not some business or institution is involved.

The aim of the activists is to wage complete warfare on any recalcitrants and their work, seeking to ruin them one way or another. I am under no illusions of the real endgame here. Sadly many folks think they can just tweak this or change that, and then go back to business as usual.

But in this day there is no business as usual. Things have changed – radically. Again, simply follow Gaynor’s long, torturous and ongoing story to see what is going on here. And his sad tale is just one example of this. Many more could be mentioned.

So here is what we must know: We need to get real about this war, and get real about radical, biblical trust in God – something none of us have had to do up till now. As I have been saying for months now, we ALL need to learn what real dependence on God is.

We will need to learn what genuine trust is, as we start losing our jobs and income. All real deal believers will soon be in the same boat, and we will need to fully trust God to meet our needs. Are we willing to trust him entirely? And we also need to learn about radical giving and generosity. When we start losing our jobs, our homes, our cars, will other Christians be there to look after us?

Or will they just glibly say, ‘I am praying for you brother’? Soon our prayers will need some practical outworking. Of course right now Chinese Christians are doing this – living by radical faith, and radically supporting one another. Why do we think we can avoid this?

We keep hoping things will go just back to normal and we can keep living in comfort with our cushy lifestyles and secure incomes. Those days are quickly disappearing. If we think we can play their game, not rock the boat, and stay silent until we retire, then they have already won.

Now is the time to stand up for Christ and truth. The only question is, are we willing to pay the price for this? Are we willing to say, “Here I stand, I can do no other”?