What is wrong with unisex school bathrooms and the like?

The sexual revolutionaries have been in bed with governments for some time now, forcing an unwilling populace to accept all sorts of radical policies which are decidedly NOT in the public interest. Ramming down our throats radical transgender policies is a major part of this.

In the latest move by the sexual state to impose radical leftist agenda items on our children, we now read that “students will share gender-neutral toilet facilities at Brisbane’s new $80 million vertical high school.” Yep, the coercive utopians of the left are intent on stripping away the privacy and wellbeing of our students in the interests of further promoting radical gender bender ideologies. 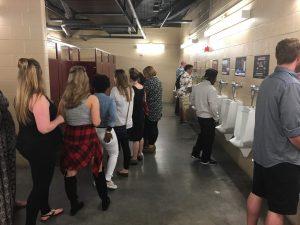 Thankfully the LNP education spokesman Jarrod Bleijie called the plan a “recipe for disaster,” while others warned about the dangers of such a move. Sadly many Western jurisdictions have been turning our schools into laboratories for activist sexuality. So this is simply the latest in a long line of such social engineering episodes.

But it is a perilous direction to be moving in, and it must be resolutely opposed. Let me here outline some of the reasons why unisex toilets in our schools and the like must be resisted. Safety is one obvious reason. As an alarming news item from earlier this year had warned:

Schoolgirls are too afraid to use unisex toilets over fears of ‘period shaming’ from boys and sexual harassment, campaigners warn. A growing number of schools are ditching separate-sex loos claiming they are not inclusive to transgender children and are a breeding ground for bullying. But some girls are avoiding going to the toilet during school hours because of cruel taunts from boys and a lack of privacy, according to the Daily Express.

And some girls even avoid drinking water so that they will not have to use the toilet. A parent of a secondary school girl told the newspaper that ‘boys are always speculating on whether girls are having their periods according to how long they take in the toilet.’ Feminist campaigners Women’s Voices Wales claim that the ‘safety and dignity’ of girls at school is being neglected. www.dailymail.co.uk/news/article-6714753/Unisex-toilets-schools-leaving-girl-pupils-afraid-use-loo.html

But to further make my case, let me draw upon three experts. The first is Ryan Anderson. Last year his very important book on transgenderism appeared. You can see my review of When Harry Became Sally here: billmuehlenberg.com/2018/02/21/review-harry-became-sally-ryan-anderson/

In the book he spends a fair amount of time on this matter, and is well worth quoting from. He writes:

Gender identity policies are not just about allowing citizens who identify as transgender to live as they choose, but about coercing the rest of us to go along with a radical ideology. Schools are a major front in this campaign…. The transgender policy agenda entirely ignores competing interests and considerations, including the privacy and safety of others, particularly girls and women, and it disregards the requirements of true equality….

Sex-specific intimate facilities exist in order to provide bodily privacy. This is something that people on both sides of the political spectrum once understood…. Many courts have defended the bodily privacy rights of people in a variety of settings….

In addition to guarding privacy, sex-specific intimate facilities exist to serve the related purpose of protecting girls and women from male predators. The concern is not that people who identify as transgender will engage in inappropriate acts (as some activists have mockingly said), but that predators will abuse gender identity policies to gain easier access to victims. Law enforcement experts have given testimony on precisely this problem….

Many women worry that the original purpose of Title IX – working toward women’s equality in education – is threatened when “sex” is redefined to mean “gender identity.” The law was intended to remedy a history of disadvantages, and this aim is necessarily compromised by policies that make the category of “woman” ambiguous and fluid. Allowing anyone who identifies as a woman to be regarded as a woman in public policy erases the very meaning of womanhood in law.

She has a chapter on transgenderism and looks at some of the broader concerns with SOGI (Sexual Orientation and Gender Identity) laws. She writes:

What this language implies is that scientific facts do not matter. SOGI laws are being used to impose a two-level worldview that disparages the physical body as inconsequential, insignificant, and irrelevant to who we are. As O’Donovan writes, the transgender narrative suggests that “the body is an accident that has befallen the real me; the real me has a true sex” apart from the body. “The body is an object set over against the personal subject located in the thinking-feeling mind.”

Consider a recent case in the Fourth Circuit Court, in which a girl who identified as a boy named G. G. demanded the right to use the boys’ restroom. The judge ruled that G. G.’s birth-assigned sex, or so-called ‘biological sex,’ is female, but G. G.’s gender identity is male.”

Her “so-called ‘biological sex’” – in sneer quotes? This is a judge writing a formal ruling for a federal court, and he treats the very existence of biological sex with suspicion and disdain. Apparently he thinks the facts of physiology, anatomy, chromosomes, and DNA are less real or knowable than the girl’s subjective feelings about her gender.

I ran across an internet forum discussing transgenderism, where a commenter wrote, “What does some little bit of flesh between the legs matter?” Why should that make a difference to your sense of who you are?

This is a devastatingly reductive view of the body. Young people are absorbing the idea that the physical body is not part of the authentic self – that the authentic self is only the autonomous choosing self. This is ancient Gnosticism in a new garb. Policies imposing transgender ideology on children as early as kindergarten are teaching them to denigrate their bodies—to see their biological sex as having no relevance to who they are as whole persons. The two-story dichotomy causes people to feel estranged from their own bodies.

Finally, let me quote from a brand-new article by constitutional law expert Gerard V. Bradley. His article, “Compelled Sexual Affirmation in the School Bathroom,” goes into some detail on unisex policies and their harmful impact. He writes:

Courts engulfed by misguided sympathy for gender-dysphoric students sometimes also rely on what they say is the very exceptional nature of transgendered students. They ask: what is the big deal about just one kid—a “Gavin” or an “Ash”—who will quickly go, or shower, and be done with it? But this dodge won’t do. It is true that only individual plaintiffs appear in the lawsuits. But plausible estimates of the number of self-identified transgender students in high schools across the country range anywhere from two to three percent up to nine percent of the total student body. And there is good reason to expect that, as “compelled affirmation” policies and the wider elite-cultural promotion of transgender identity proliferate, so too will the number of confused high-school students. Copy-cat sexual identity questioning is already a documented phenomenon.

More importantly, wherever school officials buy into “affirmation,” every student’s understanding of himself or herself as embodied, as male or female in body and mind, is threatened. Where the school promotes “affirmation,” each student’s self-understanding as an integrated unity is contradicted. If anyone’s true sexual self is trapped in the wrong body, anyone else’s could be. If anyone’s could be, then everyone possesses a gender identity that might be different from his or her natal sex. Everyone is then transported to a world of body-self dualism. Besides, everyone in the path of even just one trans classmate is at serious peril of having to lie about that person’s sex. www.thepublicdiscourse.com/2019/12/58498/

Much more can be said about all this. Suffice it to say that the leftist social engineers who are using our vulnerable children as guinea pigs in their radical social experiments need to stop – and stop now. How dare they assault our children to push extremist ideologies. Shame on them.

And I hope that all concerned Queenslanders write to their state members and complain about the gender madness in this new PC high school in Brisbane: www.parliament.qld.gov.au/members/current/list

20 Replies to “Against Unisex Facilities”