The sanctimonious and duplicitous left just loves to moralise and preach at us:

Here are two things you can always count on: One, the secular left loves to moralise, take the moral high ground, and tell us how we ought to live. Two, in almost every case our best response is to just ignore these folks, or tell them to take a hike.

The truth is the secular left can be amongst the most immoral – or at least amoral – bunch around, yet they are going to keep lecturing us on morality? I don’t think so. Indeed, the blatant double standards and hypocrisy abounds just about every time they open their mouths and start telling us peons what is right and wrong. 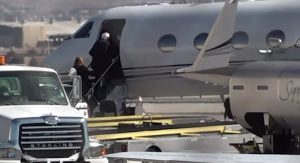 Examples are endless of course, and we see this duplicity on display on a daily basis. We have socialists like Bernie Sanders for example lecturing us on the evils of capitalism, the need to make radical changes to our lifestyles to save the planet, and how we must do away with fossil fuels, etc.

But he and others like him happily drive around in their SUVs and enjoy flying in their private jets (yes, that picture is of him). They enjoy their collection of very nice homes – or should I say, mansions – while they denounce us for the way we live. Good grief, just zip it Bernie and Co. Nobody wants to hear sanctimonious sermons from old hypocrites like you guys.

Indeed, the same can be said about all the other leftist green hypocrites such as Al Gore. He lives the good life, has a raft of mansions (often right on the sea that is supposed to rise and destroy all of life), flies around in private jets, and drives around in a fleet of gas-guzzling cars. Yeah, preach it brother, preach it.

And of course the American Democrats offer us a never-ending supply of this sort of thing. The most moralistic party around, it is made up of some of the most immoral folks you will find. Consider the batch of contenders for the Democrat nomination.

Every single one of them supports open slather on abortion, advocating and celebrating abortion right up until birth. Most of them denounce the rest of us as greedy materialists who need to radically reduce our lifestyles to save the planet, while they live like king’s kids.

They always seek to take the moral high ground, yet on a daily basis demonstrate what complete frauds they are. They go on and on, speaking of the need for civility and respect, claiming that Trump and the Republicans are the epitome of evil in the world.

Yet all we have had for the past three years are a group of whining cry babies who have never come to accept that their candidate was defeated, and Trump is their duly elected President whether they like it or not. So for three years they have been the most uncivil bunch of brats imaginable.

Three years of Russia, of the Ukraine, of impeachment – all because like spoiled brats and self-centred toddlers they cannot accept the will of the American people. And the highlight of this of course took place a few days ago when the ever petulant and hateful Nancy Pelosi ripped up Trump’s SOTU speech.

Talk about an out-of-touch whiny baby. Talk about a shameless grandstander who needs to grow up. But of course she is simply a clear manifestation of the Democrats in action. A Party that preaches to us about right and wrong yet does not seem to even know what those words mean. So stop lecturing us already.

Oh, and don’t get me started on someone like Alexandria Ocasio-Cortez. She is among the worst of the lot. But just one example is worth running with here. She of course famously said last year that we’re all gonna die: “We’re like, ‘The world is going to end in 12 years if we don’t address climate change.’ And, like, this is the war; this is our World War II.”

So she has declared war on all fossil fuels, cars, airplanes, and the like. But does she live what she preaches? Um, no, not at all. As Tammy Bruce explains:

“Since declaring her candidacy in May 2017, Ocasio-Cortez’s campaign heavily relied on those combustible-engine cars — even though a subway station was just 138 feet from her Elmhurst campaign office. She listed 1,049 transactions for Uber, Lyft, Juno and other car services, federal filings show. The campaign had 505 Uber expenses alone,” the Post reported. “In all, Ocasio-Cortez spent $29,365.70 on those emissions-spewing vehicles, along with car and van rentals — even though her Queens HQ was a one-minute walk to the 7 train,” the New York newspaper noted. www.foxnews.com/opinion/tammy-bruce-alexandria-ocasio-cortezs-hypocrisy-is-on-display-in-some-remarkable-ways

And behind the political left stands the mainstream media which is also awash with double standards and hypocrisy. I have written plenty about this over the years. Like the left itself, these folks champion – or say they champion – things like tolerance and diversity and acceptance. But the almost complete absence of any counter points of view, of any conservative voices, gives lie to all this.

The MSM is made up almost entirely of those of the secular left, and there is not a day that goes by that we do not see them bashing and hating on conservatives, Christians, and anyone else who dares to question their PC agenda. And what better proof do we have of this in Australia than that wretched Q&A show on the ABC? I rest my case.

But wait, there’s more. Perhaps the epitome of hypocritical moralisers and egotistical ethics preachers of course can be found in that cesspit of immorality and debauchery, Hollywood. These guys are forever lecturing the rest of us mere mortals about how we need to live, and it gets especially bad as the various annual award shows come around.

Speaking of which, Mark Latham, the leader of One Nation in NSW, just let out a ripper of a comment about this on the social media: “Great, it’s Oscars day, when the people who protected Harvey Weinstein for 20 years and sucked up to Jeffrey Epstein get to tell the rest of us how to run our lives. Puke.”

Of interest, it was decided that today’s Oscars will be hostless. The 92nd Academy Awards is perhaps fearful of how things transpired at the Golden Globes. Remember how host Ricky Gervais roasted all the Hollywood elites? I wrote about his performance last month, including his scorching barb at the Hollyweird crowd:

“If you do win an award tonight, don’t use it as a platform to make a political speech. You’re in no position to lecture the public about anything. You know nothing about the real world. Most of you spent less time in school than Greta Thunberg. If you win, come up, accept your little award, thank your agent and your god, and f**k off.” billmuehlenberg.com/2020/01/07/golden-globes-highlights-and-lowlights/

While he may not be hosting today’s event, that has not stopped him from already offering a few cutting tweets: “It’s great to see such diversity in the room tonight. Rich sex pests of all shapes and sizes.” And again, “I can’t wait to hear all your inspirational speeches about equality, and it’s great that the 3 hours you’re here tonight is the only time your badly paid migrant house staff will get some time off to sleep this week.”

If ever we had a group of sanctimonious moralisers addicted to lecturing us on all things right and wrong, it is this mob of hyper-rich, hyper-arrogant and hyper-immoral denizens of LA and beyond. Thankfully a few of these celebs keep their mouths shut and do not preach to us about morality, but far too many do.

As the ever-clever satire site Babylon Bee said in a headline about last year’s Academy Awards: “Nation’s Wealthy, Privileged Gather To Lecture Nation On Evils Of Wealth, Privilege.” Yep, that is about as succinct and accurate as you are going to get.

The moral of the story is this: most of the loud-mouthed secular lefties have no morals. And if they do have any standards, they are simply double standards. So just leave us alone already – we really do not need you lecturing to us anymore.

Oh, and can those on the right at times be guilty of these things as well? Sure. But when it comes to incessant moralising, hardcore hypocrisy, and loads of double standards, the Oscar goes to: the left.