Both biblical and secular history can be of great help in times of crisis:

As always, having an understanding of history can be extremely helpful, especially in dark times. Understanding that our current situation is not all that unique, and that there is much that we can learn from what has gone before is certainly of value. This is not our first pandemic, and if the Lord should tarry, it likely will not be our last. 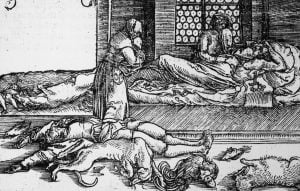 So let me offer a few lessons from history, beginning first with biblical history. There we find this basic truth: God can and does often use something like plague and pestilence as an instrument of his judgment. The passages on this are many.

We all know of Exodus 7-12 of course which gives us the account of the ten plagues Yahweh sent on the Egyptians. But well before this God was also afflicting the Egyptians, as Genesis 12:17 states: “But the Lord afflicted Pharaoh and his house with great plagues because of Sarai, Abram’s wife.” There are many more such passages. Here are a few of them:

Exodus 32:35 Then the Lord sent a plague on the people, because they made the calf, the one that Aaron made.

Numbers 11:33 While the meat was yet between their teeth, before it was consumed, the anger of the Lord was kindled against the people, and the Lord struck down the people with a very great plague.

Numbers 14:37 the men who brought up a bad report of the land—died by plague before the Lord.

Numbers 16:46 And Moses said to Aaron, “Take your censer, and put fire on it from off the altar and lay incense on it and carry it quickly to the congregation and make atonement for them, for wrath has gone out from the Lord; the plague has begun.”

Deuteronomy 32:23-24 And I will heap disasters upon them;
I will spend my arrows on them;
they shall be wasted with hunger,
and devoured by plague
and poisonous pestilence;

2 Chronicles 21:14 behold, the Lord will bring a great plague on your people, your children, your wives, and all your possessions,

Psalm 106:29 they provoked the Lord to anger with their deeds, and a plague broke out among them.

Hosea 13:14 I shall ransom them from the power of Sheol; I shall redeem them from Death. O Death, where are your plagues? O Sheol, where is your sting? Compassion is hidden from my eyes.

Habakkuk 3:4-6 His brightness was like the light;
rays flashed from his hand;
and there he veiled his power.
Before him went pestilence,
and plague followed at his heels.
He stood and measured the earth;
he looked and shook the nations;
then the eternal mountains were scattered;
the everlasting hills sank low.
His were the everlasting ways.

Revelation 9:18 By these three plagues a third of mankind was killed, by the fire and smoke and sulfur coming out of their mouths.

Revelation 15:1 Then I saw another sign in heaven, great and amazing, seven angels with seven plagues, which are the last, for with them the wrath of God is finished.

Revelation 16:21 And great hailstones, about one hundred pounds each, fell from heaven on people; and they cursed God for the plague of the hail, because the plague was so severe.

A few things can be said about such passages. One, these are just some verses of many that could be mentioned here. Two, note that it is not just pagans who can be subject to the judgment of God via plagues – God’s people can also be the recipients. Three, thus far, despite some very severe plagues, mankind has persevered. The plagues mentioned in Revelation however may be the final ones.

Four, and most importantly, I am NOT saying that coronavirus is the judgment of God. I am not a prophet and I can only surmise what is going on here. COULD it be his judgment? Yes it could be. But certainly, it should help to wake us all up as to some important truths: life is short; we will all one day meet our maker; and we need to get our priorities right.

Let me return to history. The past few thousand years of human history also offer us lessons to be learned about plagues. They have hit us hard in the past, but life did go on. In an earlier piece I mentioned the Black Death of the mid-1300s: https://billmuehlenberg.com/2020/03/14/coronavirus-christianity-history-and-faith/

That was indeed a killer plague. Anywhere from a third to a half of all of Europe’s population perished in that outbreak. Christians had to deal with those trying times just as we have to today. To help us get some perspective on coronavirus, and to see what transpired back then, consider these descriptions that I have taken from Philip Schaff’s 8-volume History of the Christian Church.

I had read all 7000 pages of this great work decades ago while a missionary in Holland. I just now pulled out volume 6 and reread what he had to say about the great plague. Here are some intriguing excerpts:

During Clement’s pontificate, 1348-1349, the Black Death swept over Europe from Hungary to Scotland and from Spain to Sweden, one of the most awful and mysterious scourges that has ever visited mankind. It was reported by all the chroniclers of the time, and described by Boccaccio in the introduction to his novels….

In describing the virulence of the infection, a contemporary said that one sick person was sufficient to infect the whole world. The patients lingered at most a day or two. Boccaccio witnessed the progress of the plague as it spread its ravages in Florence. Such measures of sanitation as were then known were resorted to, such as keeping the streets of the city clean and posting up elaborate rules of health. Public religious services and processions were appointed to stay death’s progress….

The mortality was appalling. The figures, though they differ in different accounts, show a vast loss of life. A large per cent of the population of Western Europe fell before the pestilence. In Siena, 80,000 were carried off; in Venice, 100,000; in Bologna, two-thirds of the population; and in Florence, three-fifths. In Marseilles the number who died in a single month is reported as 57,000. Nor was the papal city on the Rhone exempt. Nine cardinals, 70 prelates, and 17,000 males succumbed….

No class was immune except in England, where the higher classes seem to have been exempt. The clergy yielded in great numbers, bishops, priests, and monks. At least one archbishop of Canterbury, Bradwardine, was carried away by it….

Bishops found cause in this neglect to enjoin their priests to preach on the resurrection of the body as one of the tenets of the Catholic Church, as did the bishop of Winchester. In spite of the vast mortality, many of the people gave themselves up without restraint to revelling and drinking from tavern to tavern and to other excesses, as Boccaccio reports of Florence. In England, it is estimated that one-half of the population, or 2,500,000 people, fell victims to the dread disease….

The English king prorogued parliament. The disaster that came to the industries of the country is dwelt upon at length by the English chroniclers. The soil became “dead,” for there were no laborers left to till it….

Hopefully all that gives us at least some perspective on our current crisis. Sure, it is early days with corona, and we do not know with any certainty how long it will last and how much worse it will get. But we can keep in mind that horrific pandemics have occurred before, and mankind has survived.

And that leads me to a final point. Christians believe that God is sovereign, that he is working out his purposes, and that he does know when this current world will come to an end. Coronavirus has not caught him by surprise, and he knows when and how things will be wrapped up on planet earth.

He also knows all about each and every single one of us, with even the very hairs on our heads being numbered. And he knows our appointed times. When it is time for us to leave this world, it will be according to his schedule, and not fate. Sure, these are terrible times and I am not seeking to make light of all this.

But faith, not fear, is to be the response of Christians. As others have said, when the world is in a panic, it needs a church which is rock solid, offering very real hope and a way forward. We need to stand strong on our Lord, the rock, and offer direction for the lost who are on shifting sands.

During this time of crisis Christians need to be at the forefront of leading the way in how we are to live. And as we do this, we need to be praying for our leaders, such as Trump in America, Morrison in Australia, and so on. They need divine help and wisdom right now as they seek to steer us through all this.

Two passages are worth closing with here:

Psalm 23:4 Even though I walk through the valley of the shadow of death,
I will fear no evil,
for you are with me;
your rod and your staff,
they comfort me.

Philippians 4:6-7 Do not be anxious about anything, but in everything by prayer and supplication with thanksgiving let your requests be made known to God. And the peace of God, which surpasses all understanding, will guard your hearts and your minds in Christ Jesus.

11 Replies to “Plagues, Panic and Providence”