The most important thing is to let God change us during this time of crisis:

It seems we have heard these words before: “The world is now forever changed.” “There can be no more business as usual.” “There is no more going back to the old ways of doing things.” Where have we heard such things? We are certainly hearing them right now because of COVID-19.

But we have also heard this at other times of great crisis, especially just after 9/11. When the twin towers fell most folks were talking about life no longer being the same, that everything would change, and that we must prepare for a new way of living. So, was that the case? 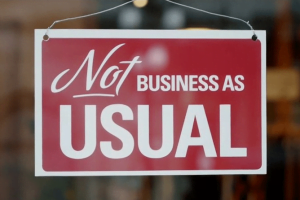 Well, yes and no. Sure, some things did change. We now have longer, slower lines at airports because of security checks. That has certainly been one permanent change because of the terror attacks. And at least to some extent for some people, there is a greater understanding that the political ideology of Islam is a very real threat. But even that is quite hit and miss, with plenty of Western leaders and media outlets doing their best to tell us Islam is just a religion of peace.

So how much did things really change after 9/11? The truth is, very soon after that horrific day, it really was a return to business as usual. Most people went on living the very same lives they were living before. And here I am interested in looking at the spiritual side of things.

Yes, there seemed to have been a brief uptake in church attendance right after the jihad attacks, but that did not last very long. Folks went right back to their pagan, selfish selves. There was no real revival or reformation that swept through America.

Basically, people lived the very same lives that they lived before. It was business as usual: people being selfish and greedy and materialistic and consumeristic and fixated on living the good life. The spiritual condition of the nation did not really change, and most folks went on living as they always had: mainly for themselves.

But we are being told once again that everything will change with this current crisis. Time will tell. If something like 9/11 could not really shake us out of our selfish and sinful lifestyles, will coronavirus do it? Much of it depends on how long this thing drags on.

If we see a turn around in terms of new cases and deaths in just a month or so, then I suspect that yes, it will soon revert back to business as usual. But if it drags on for six months or more, as some are saying, then yes, there may well be some changes.

But they may be more governmental and societal changes, as opposed to individuals changing how they live, at least spiritually speaking. Already, for example, conservatives are rightly calling for an end of Western reliance and dependence on China for all sorts of things, including medicines and cheap products.

So that could well change, along with bigger picture items like reckless globalisation, open borders and the like. Everything that folks like Trump have been warning us about is happening with this virus. There really IS a good case for strict border controls, for national sovereignty, and for not running with globalist bodies such as the UN. So those things may change as well.

And if it leads many people to start focusing on God and eternity then that is certainly a good thing. As I said, it did not really happen after 9/11. Maybe it will start to happen here. The longer the crisis drags on, and the more draconian and austere government measures become then there are greater chances of some folks at least looking beyond materialism, and hopefully reaching out to God.

Of course, if they simply reach out to all the counterfeit and bogus spiritualities out there such as the New Age Movement they will end up fully disappointed. It is Jesus Christ and him alone that they need a living encounter with. And not any old Jesus, but the Christ of Scripture.

With this in mind, let me conclude this piece by sharing some basic truths: One, most folks do not like change (me included). And it often takes something pretty radical to get them to change. Two, we tend to want to take the easy way out. We will make slight adjustments to our lives, but only for as long as is required. When things go back to normality, we tend to go back to our old ways. Three, often the best medicine needs time to do its work, but we so often do not want to give it the proper time.

Let me give a practical example and then make the spiritual analogy. I really dislike going to dentists. I guess I had some bad experiences when young. So I tend to avoid them, and only go when a tooth really starts hurting. And when there, I want them to only do the minimal and quickest amount of work.

But a concerned dentist will not readily allow a patient to just run. If they know that lengthier major work is required to bring about total health, they will insist on that. Of course cowards like me can still say no, leave the dental office, and simply stay away. But we may be asking for real trouble in that case.

It is the same in the spiritual realm. God can use a crisis like this to get our attention and deal with our spiritual tooth decay. Our spiritual health is in a real bad way, yet most folks do not want to even think about it. Thus it is often not until a crisis breaks out that God can finally get the attention of some of us.

And again, we must allow for God’s full and complete work. If we are hoping the crisis ends in a month, we will all just go back to business as usual. So God may allow it to go on for many months, knowing that the spiritual medicine so many of us need will take some time. There can be no quick fixes here when it comes to soul surgery. We are in need of major spiritual operations.

If God has to allow a major disruption of the West – and perhaps the whole world – with perhaps millions of jobs lost, major social and economic disruptions, then he may well be prepared to do that. He would far rather that we get our priorities right than just live the good – but dead – life.

Allowing us to go without so many luxuries that we are used to can be a part of how God gets our attention and how he woos us back to himself. As such, we must allow the Master Surgeon to do his work. We must allow the Great Physician the ability to work in our lives, and do deep surgery if needed.

So if we must enter into chaotic times of economic meltdown and social disarray, in order for God to get some of us to look up to him instead of to self or to governments, then so be it. God loves us too much to let us go at the first hint of discomfort and suffering.

Getting right with God for all eternity is what matters. If that means God will shut down the entire world for a year or two to do it, then that is a good thing. Let God do his work. Sure, I am not being glib here. People do have to eat and survive. We are all starting to feel the pinch with empty supermarkets, mass job losses, rationing, and even things like martial law being declared.

It will be tough on all of us, especially the poorer amongst us. The really wealthy may have all sorts of stockpiles and reserves, and can often buy themselves out of a crisis. But for most of us, this will be a very difficult time indeed. But God is in control, and we must allow him to do his work.

If he is using this to shake us out of our damnable selfishness, sinfulness and apathy, that is a good thing. We need more of it – bring it on Lord. And Scripture assures us that this indeed will take place. Consider what we find in Haggai 2:5-7: “Fear not. For thus says the Lord of hosts: Yet once more, in a little while, I will shake the heavens and the earth and the sea and the dry land. And I will shake all nations.”

See that you do not refuse him who is speaking. For if they did not escape when they refused him who warned them on earth, much less will we escape if we reject him who warns from heaven. At that time his voice shook the earth, but now he has promised, “Yet once more I will shake not only the earth but also the heavens.” This phrase, “Yet once more,” indicates the removal of things that are shaken—that is, things that have been made—in order that the things that cannot be shaken may remain. Therefore let us be grateful for receiving a kingdom that cannot be shaken, and thus let us offer to God acceptable worship, with reverence and awe, for our God is a consuming fire.

I am not a prophet, and I am not saying COVID-19 is definitely, specifically the direct judgment of God. It certainly could be. But I do know that God is in control, that God is sovereign. So he most certainly is using this for his purposes.

The only questions we must ask as he shakes the whole world are these: Are we listening? Are we seeking to hear what God is saying? Will we allow God to draw us to himself during these dark times, or will it just be more business as usual?

11 Replies to “No More Business As Usual?”