How far can we go in opposing evil governments?

One might think with all the corona crisis we are now engulfed in that I am again speaking to this matter, and referring to the new tyrants who are taking away our freedoms by means of draconian lockdown measures. But that is only in part what I want to address here. I do want to look at bigger matters, such as a biblical and theological reflection on geopolitical affairs and international relations. 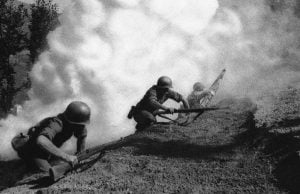 That is, how are Christians to understand things like international conflict and warfare? I happen to believe that there is a place for just war. I think we were morally right to fight Hitler and the Nazis, and I think we were also right to resist expansionist Communism. In both cases defensive warfare sought to check the spread of great evil, of ruthless tyrants, and of bloodthirsty ideologies.

Just as God ordained the state to keep evil in check and to punish evildoers (by means of courts, the police, and so on), so too there is a place for armies and for the protection of one’s national borders. Ancient Israel of course knew all about such things.

It is the situation as found in the Old Testament that I want to bring to bear here in contemporary discussions of if and when nations can go to war against evil powers and militant threats to freedom and democracy. In particular, I want to examine a key passage found in the book of Jeremiah. As I am again rereading through this important book, I came upon these verses (Jer. 38:1-4), in my daily reading:

Now Shephatiah the son of Mattan, Gedaliah the son of Pashhur, Jucal the son of Shelemiah, and Pashhur the son of Malchiah heard the words that Jeremiah was saying to all the people: “Thus says the Lord: He who stays in this city shall die by the sword, by famine, and by pestilence, but he who goes out to the Chaldeans shall live. He shall have his life as a prize of war, and live. Thus says the Lord: This city shall surely be given into the hand of the army of the king of Babylon and be taken.” Then the officials said to the king, “Let this man be put to death, for he is weakening the hands of the soldiers who are left in this city, and the hands of all the people, by speaking such words to them. For this man is not seeking the welfare of this people, but their harm.”

I will speak to this text in more detail in a moment, but the main point I want to make here is this: back then God sent his prophets to tell his people what was going on. The people were not left in the dark, and God spoke to them through these prophets – whether it seemed to be good news or bad news.

So they were not left scratching their heads as to what was happening all around them. They had divine commentary on so many things by means of the prophetic word. Often the prophets could tell the people that some disaster (such as a plague or famine or whatever) was happening for a specific reason – usually because of their sin and disobedience and idolatry.

And here we have the same: Jerusalem was at the end of its ropes, and the evil Babylonians were closing in real fast. Jeremiah said that this was all part of God’s divine judgment on them, and therefore they should not resist the Babylonians (or Chaldeans). So the people had the divine word as to what was happening.

But as I have often said, we today do not have that same clear prophetic word, so we are often left guessing as to why this or that disaster has befallen us. Be it Covid, or war, or drought, or bush fires, we can only speculate as to why these things are happening. Are they the direct judgment of God on a sinful people? It could well be, but we may not know for sure.

But back then ancient Israel was not left doubting and wondering. God spoke to them through the prophets and told them why things were happening – often predictively foretelling what would be happening – and why. So here we have what the leaders in Jerusalem could only consider to be pure treason: Jeremiah was telling them not to resist these evil tyrants, and to accept what was coming their way.

No wonder they so hated Jeremiah, and they so often had him thrown in prison. He actually seemed to be siding against God’s own people and siding with their enemies. That is treason indeed! But God was behind it, and all Jeremiah could do was share the bad news and face the consequences.

Let me offer some commentary on this particular episode. Philip Graham Ryken gives us this backdrop to the situation:

To understand why Jeremiah’s sermon made people mad, it helps to understand how desperate the situation was in Jerusalem. The city was under siege. The most powerful military force in the world – the Babylonian army – was camped outside its walls, cutting off all supplies. Bread rations were starting to run low, and there was no water left in any of the cisterns, only brackish mud.

Very likely, the Babylonians had started to attack the walls of the city, trying to undermine its towers or knock down its gates with battering rams…

Given the city’s weak tactical position, it is easy to see why Jeremiah’s little sermon was bad for morale. He was announcing that victory was impossible, defeat inevitable. His message was “Surrender or Die.” He was preaching that message not because the Babylonians were invincible, but because God himself was fighting on Babylon’s side.

And Old Testament scholar Michael Brown also helps us to see what was happening here:

Jeremiah’s message gives further credence to the charge that he is a traitor ready to desert to the Babylonians (37:13-14), since he is now urging everyone to surrender to the very same enemy, also assuring them (v.3) that Jerusalem was about to fall. How treasonous these words must have sounded to those who still believed that the fight was on and that Yahweh would deliver the people and the city…

Once again Jeremiah’s opponents determine that his words deserve death (cf. 11:18-21; 26:8; 38:15). . . . What an outrageous charge! The precise opposite is true, and out of his ardent desire to see true shalom in this troubled city and to avoid the appending raca [disaster] he has spent the better part of the last forty years exposing the false promises of shalom (cf. esp. 6:14; 8:11; 14:13; 23:17), urging the people to repent so that blessing can come and disaster be averted. In reality, the only true way to shalom is to heed his warnings, but with that option long since passed, all the promises of shalom have been transferred to the future (cf. esp. 29:11; 33:6, 9). God’s merciful present way for the people to avoid further suffering is to surrender (v.3).

As mentioned, it is much harder today to know how to respond to every evil ruler, every lousy government, and every case of tyranny. In the OT with a certain and sure prophetic word, ancient Israel knew when they should fight enemies – both within and without – and when they should not. We do not have that same sort of clarity today.

So we – and our rulers – need wisdom and discernment as to when we should engage, as to when a just war or revolt is possible and desirable. Some cases are clear. Most would agree that the Allies were fully justified in uniting militarily against Hitler. Other tyrants and acts of aggression may also require some sort of armed intervention, but it may be less clear if and when that should happen.

The bigger theological issues cannot be entered into here. Even if God used evil, pagan nations like Babylon or Assyria for his purposes to judge his own people, they were still held to account, and also judged by God. See Isaiah 10 for example as a classic case of this.

So yes, it is possible that today as well God uses all sorts of evil rulers and tyrants as part of his purposes. Whether we can resist and fight back – on various levels – is another matter, and still requires discernment and understanding. The evil we see Communist China inflicting on its own people, as well as on the once free Hong Kong, is a case in point.

And the evil we see bungling rulers like Dan Andrews inflicting on poor, longsuffering Victorians is another. At the very least we must pray for these leaders. And we need to keep in mind that we can fully detest evil and injustice while also praying for those who are behind it.

I do this every single day for Premier Andrews who has helped to cause the deaths of hundreds and the economic ruin of hundreds of thousands through his arrogance, sheer incompetence, and criminal negligence. So I will keep holding him to account as I keep praying for him.

And praying that God removes the wicked is certainly quite Scriptural. Praying the imprecatory psalms actually is fully biblical. We do indeed have such prayers in Scripture, and we can pray them against evil and ungodly leaders who are doing so much horrific harm to so many. See this piece for example: billmuehlenberg.com/2020/08/04/yes-seek-justice-and-vindication/

It would be nice to have that absolute and crystal-clear word today on how to deal with all unjust leaders and evil governments that was found in the OT. But we can at least pray today for our rulers, while always holding them fully to account at the same time.

14 Replies to “Reflections On Resisting Tyranny”