What should we make of Morrison’s push for compulsory vaccines?

Let me begin with some words of encouragement. The rather reckless talk of mandatory vaccines that Scott Morrison was pushing Wednesday morning received such a huge public backlash that by the afternoon he had to do a major backtrack and basically say. ‘Oh, I did not really mean it would be mandatory’. Never stop speaking out – your voice matters. 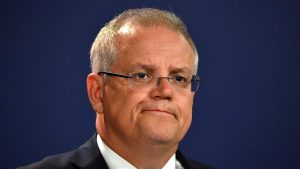 He had said that he wanted at least 95 per cent of Australians to take the vaccine, and he also said on 3AW radio that he would like the vaccine to be “as mandatory as possible.” Then by the afternoon he had changed his tune because of the massive outcry, playing down this desire for nationwide compulsory vaccinations.

As one report put it, “On Wednesday afternoon he clarified that he would only bring in measures to ‘encourage’ high immunisation rates. ‘It‘s not going to be compulsory to get the vaccine. There are no compulsory vaccines in Australia,’ he told Sydney’s 2GB radio.” Morrison had signed “a letter of intent with British pharmaceutical giant AstraZeneca. . . . But the lack of a signed and paid deal with AstraZeneca has led to Labor accusing Mr Morrison of ‘spin’, and he had to clarify later in the day that any ‘mandatory as possible’ vaccine would not be forced upon Australians.”

Let me say at the outset that I am not a gung-ho anti-vaxxer nor am I gung-ho pro-vaxxer either. As one Melbourne doctor put it:

People who are concerned/angry about what Scomo said today will be labelled “anti vaxxers” by the media. The truth is that there are many people who have no objection to the tried & proven vaccines (eg. Tetanus, measles) who will not want to be forced to have a brand new vaccine which has been produced in record time, where corners were cut in production & testing, where there is no long term safety data, and where politics rather than science is the main driving force behind widespread distribution.

Yes, and plenty of questions arise here, so I briefly offer here a number of considerations about all this. First, the idea of putting all our hopes in a vaccine is really fool’s gold. We have had flu vaccines for eight decades now, yet we still have the flu. Work on a SARS vaccine has been going on for a decade now but still with no real results. Existing flu vaccines are only around 20-60% effective, yet we had a Victorian health spokesman said we need one that is 90% effective to go back to normal!

Also, we must distinguish between ethically produced vaccines and those that are not. All prolifers should be concerned about the manufacture of vaccines using ethically-tainted human cell lines derived from aborted human fetuses. There are other COVID-19 vaccines that do not utilize cell lines connected to unethical procedures and methods. Sadly the one Morrison is considering is not the ethical sort. For more info on this, check out these pages:

And then there is this:

Perhaps it is no surprise that some of the top 5 pharmaceutical companies working on a COVID vaccine are using aborted baby cell lines in their research and all of them are funded by the Bill and Melinda Gates Foundation.

Johnson & Johnson – this Planned Parenthood funder is also using aborted baby cell lines, and they have been a recipient of Gates Foundation dollars.

CDC – Even the United States government’s own Centers for Disease Control (CDC), has received tens of millions of dollars of Gates Foundation money… and like all the others above they are using “fetal tissue” in their COVID vaccine trials.

All of these groups are using aborted baby cell lines in their vaccine trials. And most of them are promising a COVID-19 vaccine within a year, even though scientists warn that it typically takes 4 to 10 years of safety testing before vaccines should be brought to market. www.lifenews.com/2020/06/11/bill-gates-funds-pharmaceutical-companies-using-aborted-baby-parts-to-make-coronavirus-vaccines/

As to the trials for the Moderna and Oxford vaccines that Morrison is wanting us all to get: they have very concerning side-effects:

Around one-third of people vaccinated with the Covid-19 vaccine without acetaminophen experienced moderate or severe chills, fatigue, headache, malaise, and/or feverishness. Close to 10 percent had a fever of at least 100.4 degrees, and just over one-fourth developed moderate or severe muscle aches. That’s a lot, in a young and healthy group of people—and the acetaminophen didn’t help much for most of those problems. www.wired.com/story/covid-19-vaccines-with-minor-side-effects-could-still-be-pretty-bad/

It is also quite interesting to see Bill Gates squirm when asked about these severe side effects:  www.youtube.com/watch?v=It2IFcc2oY0&feature=youtu.be&fbclid=IwAR3ruQ60DSyHISgckptyTE4N7Wks8WIeYojdbkeNgTKfpBX9a3de9PPXxLw

Moreover, we need to be aware of this bit of sobering information: “AstraZeneca to be exempt from coronavirus vaccine liability claims in most countries” www.reuters.com/article/us-astrazeneca-results-vaccine-liability-idUSKCN24V2EN

And what if there is no safe, effective vaccine? What if it is one, two or three years away, if at all? Do we just stay in lockdown forever? Do we keep Australia and New Zealand in a little police state bubble with no freedoms, no businesses, no travel, no sanity? Or do we rejoin the rest of the world in opening up and going back to normal? Consider this revealing quote:

White House coronavirus advisor Dr. Anthony Fauci said Friday that the chances of scientists creating a highly effective vaccine — one that provides 98% or more guaranteed protection — for the virus are slim. Scientists are hoping for a coronavirus vaccine that is at least 75% effective, but 50% or 60% effective would be acceptable, too, Fauci, director of the National Institute of Allergy and Infectious Diseases, said during a Q&A with the Brown University School of Public Health. “The chances of it being 98% effective is not great, which means you must never abandon the public health approach.” www.cnbc.com/amp/2020/08/07/coronavirus-vaccine-dr-fauci-says-chances-of-it-being-highly-effective-is-not-great.html

Indeed, the idea of a quick fix is an illusion:

CSL chief executive Paul Perreault has cautioned that more details need to be ironed out before the biotech giant can say what role it will play in the production of the Oxford coronavirus vaccine. On Wednesday Prime Minister Scott Morrison pledged the government would supply the vaccine free to all Australians, and if the Oxford product was shown to be successful Australia would produce it “straight away under our own steam”. But Mr Perreault struck a cautious tone. “I’m certainly optimistic that we can help, but there are a lot of technical issues we still need to work through,” he said. CSL has committed to produce the University of Queensland’s molecular clamp vaccine if it is successful and is in conversations with the Australian government and British pharmaceutical giant AstraZeneca on securing local supply of the Oxford vaccine. www.theage.com.au/business/companies/be-prepared-for-anything-csl-boss-warns-of-key-unknowns-on-vaccine-20200819-p55n47.html

And there’s always other, proven alternatives, such as the Hydroxychloroquine and Ivermectin drug regimens for treatment or prevention. Yet incredibly Australian governments are banning these! We have existing treatments that have been successfully used for many decades now, but we are not allowed access to them. Why?

But it is the mandatory aspect that is especially of concern. Given that those on the left are among those most often pushing so strongly for mandatory vaccinations, what ever happened to their sacred mantra, “My body, my choice”? All that goes out the window with state-mandated vaccinations.

And we know darn well if Morrison and others say, ‘Oh it is not really compulsory’ that it sure will be. Sure, you can “choose” not to, but then you won’t be able to do most basics of life: work, travel, get various government payments and benefits, and maybe even buy or sell. Consider what one Australian medical bigwig has said:

I believe a person who refuses to be vaccinated should not be allowed to travel interstate or overseas, nor be allowed to travel on public transport without a face mask. And when it comes to the private sector, businesses could refuse these anti-vaxxers from visiting their retail outlets, gyms, movie cinemas, restaurants, bars or nightclubs. As a precedence, state governments have previously banned children from attending childcare if they are not vaccinated. Similar restrictions could be placed on Australians who refuse to take the COVID-19 vaccination. www.news.com.au/lifestyle/health/health-problems/coronavirus-astrazeneca-vaccine-doctor-slams-covid19-antivaxxers/news-story/f16004f67ac400806ac9444f879f65bf

Hey, why don’t we just line up all these recalcitrants and shoot them already! Let’s stop pussyfooting around! The fascist mindset of so many of these folks is just bone-chilling. We have so many mini-Hitlers living and breathing amongst us, and they are oh so proud of their ugly authoritarian bent.

And Greg Hunt has just confirmed that there will be consequences for such recalcitrance:

Australians could face being turned away at the border and having their welfare payments withheld if they refuse to receive the COVID-19 vaccine, Federal Health Minister Greg Hunt has warned. Mr Hunt said he would ‘not rule out’ banning Australians from entering the country if they had not received the jab as he fielded a series of probing questions from A Current Affair host Tracey Grimshaw on Wednesday evening….

New South Wales One Nation leader Mark Latham on Wednesday evening hit out at suggestions vaccine take-up could be made compulsory. ‘As predicted: the Dictatorship of the Health Bureaucrat, unelected officials where the control over our lives has gone to their heads,’ Mr Latham wrote on Twitter. ‘How about we wait until a vaccine is finalised – after human trials – and the impact on children, the elderly, pregnant women etc is assessed by medical experts, rather than Scott Morrison jumping the gun.’ www.dailymail.co.uk/news/article-8642881/Health-Minister-Greg-Hunt-reveals-tough-rules-people-refuse-COVID-19-jab.html

Some will argue that we already have various mandatory measures in place for public health and safety such as seat belts. But having to wear a seat belt is NOT in the same league as having something forcibly pumped into your body. Yes, both entail a clear diminution of our freedoms, but the latter is far more serious and potentially dangerous for the individual than the former.

Demanding that everyone be vaccinated for something that has a 99 per cent survival rate sounds like it is all about control – not medicine. Its like the meme making the rounds on the social media: “I had a joke about COVID, but there’s a 99.98% chance you won’t get it.”

The truth is, when the state forces people to receive a vaccine whether they want it or not, we have moved well beyond health care into the arena of tyranny. “But its for your own good” they will intone. Hmm, where have we heard that before?

45 Replies to “On Morrison’s Mandatory Vaccines”