The darker the times, the more we need hope – but hope in a faithful God:

The author of the book of Hebrews tells us that “hope is the anchor of the soul” (Heb. 6:19). We all need hope, especially in dark times. When you lose hope, you can even lose the will to stay alive. How many people turn to suicide when they believe that all hope is gone? 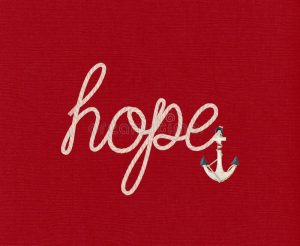 Even strong faith-filled Christians can feel rather hopeless and dejected. I know I often feel that way. I not only keep asking, ‘How long will this continue?’ but I get even more discouraged when I realise the answer: under power-hungry leaders like Dan Andrews this may go on indefinitely, perhaps forever. And he has actually said as much. Talk about discouragement. Talk about losing hope.

But despite our bleak and ugly circumstances, we must cling to hope. And our ultimate hope must be in God, not in our leaders, our politicians, those in our medical and scientific community, some magic corona cure, some fool-proof vaccine, or in anything or anyone else. God alone is the true hope for believers.

If you are reading through the Bible in a year, you should now be in the books of Jeremiah and Lamentations. There is plenty of gloomy material to be found there – plenty of divine judgment on wicked, sinful people and nations, including Israel.

Not only is so much in these two books about God’s displeasure with, and divine judgment on, ancient Israel, but we also have plenty of chapters devoted to God’s judgment on pagan nations as well, as recorded in Jer. 46-51. Yet amongst all this bad news there are found wonderful words of hope and encouragement.

The short book of Lamentations is a clear case in point. The entire volume is devoted to the reality of the destruction of Jerusalem under Nebuchadnezzar in 587 BC and the Babylonian captivity. The entire five chapters make up one long lament. Talk about a dark and gloomy portion of Scripture.

And yet right in the very heart of the book, in the middle of chapter three, we have some of the greatest words of hope found in the entire Bible. Indeed, in Lam. 3:21 we read: “this I call to mind, and therefore I have hope”. Hope, in the midst of all this misery and suffering? Really? Yes, there is genuine hope. The context is verses 19-27:

Remember my affliction and my wanderings,
the wormwood and the gall!
My soul continually remembers it
and is bowed down within me.
But this I call to mind,
and therefore I have hope:

The steadfast love of the Lord never ceases;
his mercies never come to an end;
they are new every morning;
great is your faithfulness.
“The Lord is my portion,” says my soul,
“therefore I will hope in him.”

The Lord is good to those who wait for him,
to the soul who seeks him.
It is good that one should wait quietly
for the salvation of the Lord.
It is good for a man that he bear
the yoke in his youth.

One of the great hymns of the Christian church, “Great is Thy Faithfulness” of course comes straight out of v. 23. In this darkest and most hopeless of times for God’s people, the reality of hope still shines through. That is terrific news indeed. If the greatest calamity to have befallen the Israelites could still be seen to contain seeds of hope, that should encourage all of us greatly today.

Here I want to offer a few bits of commentary on these verses. Let the words I share here encourage you to keep on keeping on in these very hard, trying and seemingly hopeless days. I begin with the thoughts of Christopher Wright who gives us the bigger picture:

“Israel lived by memory and hope. The whole narrative nature of Old Testament scripture proclaims that truth. They looked back to what God had done in their past, and they looked forward to what God would do in fulfilment of the promises that had driven their past and guaranteed their future. Memory and hope dominate verses 18-39, but wildly oscillating between negative and positive.”

As to the word “hope” in v. 21 John Mackay says this: “It describes not a fanciful or passing desire for future good fortune, but a well-grounded and enduring anticipation of blessing. This hope is derived from faith grasping the revelation God has given of his own character and of his power to transform even the bleakest of situations. This is the Scriptural remedy for those who find themselves in the depths spiritually.”

Or as F. W. Dobbs-Allsopp explains, this hope “is not facile, easily come to, but one born out of pain. . . . This is not a smug or naively optimistic hope, but a serious and profound act of expectation that is only too aware of the hurtful reality from which it demands deliverance.”

In his commentary J. Andrew Dearman also speaks of the relationship between memory and hope:

Memory plays an important role in a lament. Sometimes the poet asks God to remember and sometimes he himself remembers or recalls the previous deeds of the Lord. Such is the case in 3:19-24. Both suffering and redemption are part of the poet’s experience, and he sets their memories side by side. God is the source not only of judgment but also of deliverance. Since he knows that God is strong to save, he says he has “hope” (3:21, 24). The word in Hebrew is a verb which has the sense of waiting with expectancy. This means that the resignation seen elsewhere in Lamentations is tempered by the realization that God, who has struck both Jerusalem and the poet, is the same One who can overturn the shame of public judgment and humiliation.

Commenting on verses 19-24 Michael Brown says this: “In stark contrast, the tone changes in the very next breath. The poet confesses that in spite of the natural response to such devastating calamities, he chooses to foster a confident expectation in Yahweh. . . . The poet points to the choice of whether to focus on the calamity itself and be buried in self-pity, or on God’s character and his promise and, once again, on the confident expectation that doing so engenders (cf. v. 18).”

Philip Graham Ryken offers these remarks about this passage:

The God who had covenanted to care for Jeremiah was not a distant deity, a mere abstraction of the human mind. The prophet addressed him personally and directly: “Great is your faithfulness” (v. 23). In the process of remembering God’s attributes, Jeremiah was drawn back into living fellowship and intimate communion with his faithful God. He did not merely list God’s attributes – he praised God for them, so that his theology became his doxology….

Christians who suffer do more than suffer. They also wait. This is not the passive waiting of stoic endurance. It is rather an active resting in the goodness of God, with the hopeful expectation that someday one’s trials will come to an end. There are times when the only thing a sufferer can do is wait for God. But waiting is good because God is worth waiting for. His salvation will come in due course, provided one surrenders to his will and to his timing.

We wait in hope because God’s faithfulness is great. As a way to grasp this notion of God’s faithful, loyal love and commitment to his people, J. Daniel Hays provides us with a story of what this looks like, not just in the human realm, but even in the animal realm. He tells the story of a remarkable dog named Capitan:

“After his owner died in 2006, Capitan, a German shepherd, ran away from home. A week later he was found sitting guard over his master’s grave in Villa Carlos Paz, in central Argentina. For six years after his owner’s death Capitan has returned each night to the gravesite to sleep by his master’s side.”

Wow. If a dog can show that much ‘dogged’ commitment and loyalty to its human master, how much more will God keep his covenant love with his own people. It is in knowing that marvellous truth that we can have a firm hope, even in the darkest of times.

13 Replies to “Hope in Times of Darkness”