We find some interesting parallels between socialists and Judas:

As I was reading through the gospel of John I was struck by what I read in John 12:6. I of course have read it often before, and perhaps others have made the connection, but it occurred to me that Judas – among other things – may have been the first socialist. Let me unpack that a bit. I begin by offering the verse in context (John 12:1-8): 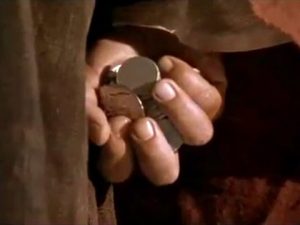 Six days before the Passover, Jesus therefore came to Bethany, where Lazarus was, whom Jesus had raised from the dead. So they gave a dinner for him there. Martha served, and Lazarus was one of those reclining with him at table. Mary therefore took a pound of expensive ointment made from pure nard, and anointed the feet of Jesus and wiped his feet with her hair. The house was filled with the fragrance of the perfume. But Judas Iscariot, one of his disciples (he who was about to betray him), said, “Why was this ointment not sold for three hundred denarii and given to the poor?” He said this, not because he cared about the poor, but because he was a thief, and having charge of the moneybag he used to help himself to what was put into it. Jesus said, “Leave her alone, so that she may keep it for the day of my burial. For the poor you always have with you, but you do not always have me.”

While the main aim of John in this passage is not to discuss economics, or political economy, we can nonetheless draw out some relevant application from it. The three things said about Judas in verse six can broadly be said about socialism as well.

First, John said that Judas did not care about the poor. Even a cursory look at socialism throughout history will show that this more or less applies to socialists – certainly socialists in power. They live the good life in luxurious mansions, with everything they could possibly want, while the masses usually languish in poverty and hardship.

This is true whether speaking of Stalin or Mao or Kim Jong-Un or Hugo Chávez, or whether we consider socialists in the West like Bernie Sanders or Jeremy Corbyn. They all seem to be doing very well indeed, while us mere plebs so often struggle just to get by and make ends meet. As Margaret Thatcher once pointed out:

I think they’ve [the Labour government of 1976] made the biggest financial mess that any government’s ever made in this country for a very long time, and Socialist governments traditionally do make a financial mess. They always run out of other people’s money. It’s quite a characteristic of them. They then start to nationalise everything, and people just do not like more and more nationalisation, and they’re now trying to control everything by other means. They’re progressively reducing the choice available to ordinary people.

A much shorter and popular paraphrase of the above gets to the heart of her point: “The trouble with socialism is that you eventually run out of other people’s money.” And the words of American economist Thomas Sowell certainly fit in here as well:

That leads to my second point: John says that Judas was a thief. Socialism, in a nutshell, is a form of theft. Because socialists so strongly condemn private property, the way things work is pretty simple: the State, or the ruling elites, simply take from the masses what they want. They can then either keep it for themselves, or redistribute the wealth as they decide.

While I do not happen to buy the claim that “taxation is theft,” I do believe that the higher and more draconian tax rates are, the more theft-like they become. As I wrote in an earlier article, quoting from Wayne Grudem’s important 2010 volume, Politics According to the Bible:

“If my taxes increase by $100, then I have $100 less to buy some new shoes or clothing, to take my wife to a movie or restaurant, to give to some missions program at my church, to buy books for additional research, to send as a gift to my children, or to do any of a thousand other things. My freedom to decide what to do with that $100 has been taken from me when the government collects another $100 in tax. So it is every time that taxes increase: A little more freedom—another small portion of everyone’s life—has been taken away by the government.” billmuehlenberg.com/2018/09/23/taxation-and-the-bible/

And we need to use the wide-angle lens on this. As Dennis Prager has so nicely put it:

The bigger the government the smaller the citizen. This is one of the most important realisations about society you will ever have. In fact, this understanding is the primary reason for America’s unique success as both a free and affluent society. Everything gets smaller as the government gets bigger. Freedom gets smaller, individuality gets smaller, goodness gets smaller, and human character gets smaller. This is not a political point on behalf of a political party. It is simply an observable fact. And it’s just common sense. www.prageru.com/video/the-bigger-the-government/

The third thing John informs us of is that because Judas was in “charge of the moneybag he used to help himself to what was put into it.” This of course follows on from the first two points. In socialism, the individual does not control the money bag – the State does.

When a handful of powerful elitists control the economy and how money and goods are distributed, then you can be sure they will be more than happy to help themselves to what is there. And as mentioned, this has always been the case when the socialists get into power.

What we really want – and need – is not wealth redistribution, but wealth creation. As Sowell again rightly reminds us, “The history of the 20th century is full of examples of countries that set out to redistribute wealth and ended up redistributing poverty.”

Yet the religious left will keep seeking to make their case, including pushing the idea that Jesus was a socialist or that he fully supported socialism, I have dealt with that in other pieces, including this one: billmuehlenberg.com/2018/08/14/actually-no-jesus-was-not-a-socialist/

In that article I quote from Matt Walsh who said:

We know that Jesus is not a socialist because socialism and Christianity stand on opposite ends of the spectrum. The socialist views poverty, and all human suffering, as a cultural disease that must be cured by the generosity of the State. It takes responsibility out of the hands of the individual and places it into the hands of the collective, which is really a collection of bureaucrats. It allows you to look at a poor man and say, “He’s not my problem because he’s our problem.” And by “our” you really mean “their.”

And I have also looked at the early chapters in the book of Acts which some religious leftists claim support socialism: billmuehlenberg.com/2010/06/21/difficult-bible-passages-acts-432-511/

In sum, those folks who think they can get socialism out of Scripture will find that they cannot get it from Jesus and others. At best, they likely can get it from Judas. But that is not the sort of company I would want to be in.

7 Replies to “Was Judas the First Socialist?”