It is very common for homosexual activists to argue that granting special rights to homosexuals and legalising homosexual marriage will not impact on anyone in any way. They claim that faith-based communities have nothing to fear, and no one will be forced to embrace their lifestyle, and things will simply go on as normal.

Of course they are lying through their teeth, and they know it. They are being deliberately deceptive here. They know full well that everything will radically change. So they have to rely on subterfuge and deceit to seek to make their case. Both faith and family suffer tremendously when these radical social upheavals are inflicted upon the rest of the community.

Indeed, it is impossible to grant special rights to homosexuals without taking away rights from the rest of the community. And we have enough examples of this now to forever silence these activists and their misleading claims. Wherever homosexualists have been granted special status and extra rights, huge repercussions for the rest of the community have been experienced. 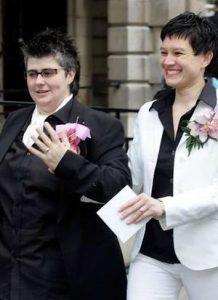 Consider just one place where this is so clearly seen. In May 2004 Massachusetts became the first American state to legalise same-sex marriage. The harmful implications have been enormous. One concerned father, Brian Camenker, was so appalled by all this that he wrote up the very real results.

While his entire article deserves careful reading, I here offer large slabs of it. This is vitally important information which everyone needs to be aware of. Here is what this concerned Massachusetts father has to say about how the public schools have been impacted by all this:

Anyone who thinks that same-sex “marriage” is a benign eccentricity which won’t affect the average person should consider what it has done in Massachusetts. It’s become a hammer to force the acceptance and normalization of homosexuality on everyone. And this train is moving fast. What has happened so far is only the beginning.

On November 18, 2003, the Massachusetts Supreme Judicial Court announced its Goodridge opinion, ruling that it was unconstitutional not to allow same-sex “marriage.” Six months later, homosexual marriages began to be performed.

The homosexual “marriage” onslaught in public schools across the state started soon after the November 2003, court decision. At my own children’s high school there was a school-wide assembly to celebrate same-sex “marriage” in early December, 2003. It featured an array of speakers, including teachers at the school who announced that they would be “marrying” their same-sex partners and starting families either through adoption or artificial insemination. Literature on same-sex marriage – how it is now a normal part of society – was handed out to the students.

Within months it was brought into the middle schools. In September, 2004, an 8th-grade teacher in Brookline, MA, told National Public Radio that the marriage ruling had opened up the floodgates for teaching homosexuality. “In my mind, I know that, `OK, this is legal now.’ If somebody wants to challenge me, I’ll say, `Give me a break. It’s legal now,’” she told NPR. She added that she now discusses gay sex with her students as explicitly as she desires.  For example, she said she tells the kids that lesbians can have vaginal intercourse using sex toys.

By the following year it was in elementary school curricula. Kindergartners were given picture books telling them that same-sex couples are just another kind of family, like their own parents. In 2005, when David Parker of Lexington, MA – a parent of a kindergartner – strongly insisted on being notified when teachers were discussing homosexuality or transgenderism with his son, the school had him arrested and put in jail overnight.

Second graders at the same school were read a book, “King and King”, about two men who have a romance and marry each other, with a picture of them kissing. When parents Rob and Robin Wirthlin complained, they were told that the school had no obligation to notify them or allow them to opt-out their child.

In 2006 the Parkers and Wirthlins filed a federal Civil Rights lawsuit to force the schools to notify parents and allow them to opt-out their elementary-school children when homosexual-related subjects were taught.  The federal judges dismissed the case. The judges ruled that because same-sex marriage is legal in Massachusetts, the school actually had a duty to normalize homosexual relationships to children, and that schools have no obligation to notify parents or let them opt-out their children! Acceptance of homosexuality had become a matter of good citizenship!

Think about that: Because same-sex marriage is “legal”, a federal judge has ruled that the schools now have a duty to portray homosexual relationships as normal to children, despite what parents think or believe!

In 2006, in the elementary school where my daughter went to Kindergarten, the parents of a third-grader were forced to take their child out of school because a man undergoing a sex-change operation and cross-dressing was being brought into class to teach the children that there are now “different kinds of families.”  School officials told the mother that her complaints to the principal were considered “inappropriate behavior.”

Libraries have also radically changed.  School libraries across the state, from elementary school to high school, now have shelves of books to normalize homosexual behavior and the lifestyle in the minds of kids, some of them quite explicit and even pornographic. Parents complaints are ignored or met with hostility.

Over the past year, homosexual groups have been using taxpayer money to distribute a large, slick hardcover book celebrating homosexual marriage titled “Courting Equality” into every school library in the state.

It’s become commonplace in Massachusetts schools for teachers to prominently display photos of their same-sex “spouses” and occasionally bring them to school functions. Both high schools in my own town now have principals who are “married” to their same-sex partners, whom they bring to school and introduce to the students.

“Gay days” in schools are considered necessary to fight “intolerance” which may exist against same-sex relationships.  Hundreds of high schools and even middle schools across the state now hold “gay, lesbian, bisexual, and transgender appreciation days”. They “celebrate” homosexual marriage and move forward to other behaviors such as cross-dressing and transsexuality. In my own town, a school committee member recently announced that combating “homophobia” is now a top priority.

Once homosexuality has been normalized, all boundaries will come down. The schools are already moving on to normalizing transgenderism (including cross-dressing and sex changes). The state-funded Commission on Gay, Lesbian, Bisexual and Transgender Youth includes leaders who are transsexuals.

He also examines how business has been adversely affected by all this:

The wedding industry is required serve the homosexual community if requested. Wedding photographers, halls, caterers, etc., must do same-sex marriages or be arrested for discrimination.

Businesses are often “tested” for tolerance by homosexual activists. Groups of homosexual activists often go into restaurants or bars and publicly kiss and fondle each other to test whether the establishment demonstrates sufficient “equality” — now that homosexual marriage is “legal”.  In fact, more and more overt displays of homosexual affection are seen in public places across the state to reinforce “marriage equality”.

After examining a number of other key areas which have been impacted by this, he concludes with these words:

Homosexual “marriage” hangs over society like a hammer with the force of law. And it’s only just begun. It’s pretty clear that the homosexual movement’s obsession with marriage is not because large numbers of them actually want to marry each other. Research shows that homosexual relationships are fundamentally dysfunctional on many levels, and “marriage” as we know it isn’t something they can achieve, or even desire. (In fact, over the last three months, the Sunday Boston Globe’s marriage section hasn’t had any photos of homosexual marriages. In the beginning it was full of them.) This is about putting the legal stamp of approval on homosexuality and imposing it with force throughout the various social and political institutions of a society that would never accept it otherwise. To the rest of America: You’ve been forewarned.

And to the rest of the world: you’ve been forewarned.

30 Replies to “Same-Sex Marriage: Who Says Nothing Will Change?”