The next big front in the sex wars is the push for all things transgender. It is receiving a huge push, including in the lamestream media. Time magazine even did a cover story on it recently. The May 29 issue said this: “Nearly a year after the Supreme Court legalized same-sex marriage, another social movement is poised to challenge deeply held cultural beliefs.” The subtitle of the piece said it is “America’s next civil rights frontier”.

Oh look, yet another “civil right” pulled out of the hat. Just as so many of us warned, once we grant special rights and marriage rights to homosexuals, then every other sexuality will be pushed as well. And the stories can be utterly bizarre. Consider this scary story out of the US:

A transgender couple are preparing to tell their children when they get older that their father actually gave birth to them and the person that they call their mother is in fact their father. Bianca and Nick Bowser are a happily married couple and live in Kentucky with their two young sons. Nick, 27, was born a girl, called Nicole, but for the last seven years has lived as a man. Bianca, 32, who is a drag artist, was born as a boy called Jason, and transitioned to live as a woman 11 years ago.
The transgender couple still have their original sex organs because they cannot afford reconstructive surgery. The cost of male to female surgery can range from £4,000 to £15,000, while female to male surgery can exceed £30,000. And they insist their children, Kai, now three, and Pax, almost one, will be fine because their upbringing will be loving, supportive, secure, and perfectly ‘normal’.
Bianca said: ‘The kids currently have no idea. It’s not like strangers ever guess in restaurants or at the shops. I don’t know when we will start to tell them, maybe when Kai is around six, but they will need to be old enough to understand. It is important they know because it’s a big secret to keep from your children and if they found out another way they could hold huge resentment. But I don’t worry about how they will react. We will not treat it as a ‘bad’ thing. And young kids are accepting and non-judgemental.’ 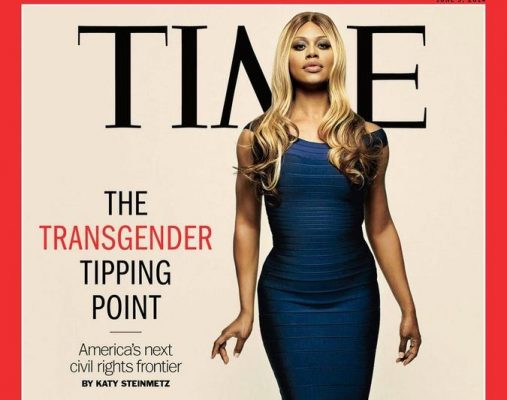 Wow. So my mum is my dad and my dad is my mum. Right. And that won’t be a problem for any child. Gotcha. This is moonbattery of very serious proportions, and it seems to be getting worse each passing day. But fortunately not everyone is being taken in by all this gender bender madness.

One is an expert on the matter, Dr. Paul McHugh, former psychiatrist in chief at Johns Hopkins Hospital. He had an important article on this issue a few months ago in the Wall Street Journal which is worth citing from here. Entitled “Transgender Surgery Isn’t the Solution,” he made a strong case against this social engineering agenda. He writes:

Yet policy makers and the media are doing no favors either to the public or the transgendered by treating their confusions as a right in need of defending rather than as a mental disorder that deserves understanding, treatment and prevention. This intensely felt sense of being transgendered constitutes a mental disorder in two respects. The first is that the idea of sex misalignment is simply mistaken—it does not correspond with physical reality. The second is that it can lead to grim psychological outcomes.
The transgendered suffer a disorder of “assumption” like those in other disorders familiar to psychiatrists. With the transgendered, the disordered assumption is that the individual differs from what seems given in nature—namely one’s maleness or femaleness. Other kinds of disordered assumptions are held by those who suffer from anorexia and bulimia nervosa, where the assumption that departs from physical reality is the belief by the dangerously thin that they are overweight.

With this argument, advocates for the transgendered have persuaded several states—including California, New Jersey and Massachusetts—to pass laws barring psychiatrists, even with parental permission, from striving to restore natural gender feelings to a transgender minor. That government can intrude into parents’ rights to seek help in guiding their children indicates how powerful these advocates have become….
You won’t hear it from those championing transgender equality, but controlled and follow-up studies reveal fundamental problems with this movement. When children who reported transgender feelings were tracked without medical or surgical treatment at both Vanderbilt University and London’s Portman Clinic, 70%-80% of them spontaneously lost those feelings. Some 25% did have persisting feelings; what differentiates those individuals remains to be discerned.
We at Johns Hopkins University—which in the 1960s was the first American medical center to venture into “sex-reassignment surgery”—launched a study in the 1970s comparing the outcomes of transgendered people who had the surgery with the outcomes of those who did not. Most of the surgically treated patients described themselves as “satisfied” by the results, but their subsequent psycho-social adjustments were no better than those who didn’t have the surgery. And so at Hopkins we stopped doing sex-reassignment surgery, since producing a “satisfied” but still troubled patient seemed an inadequate reason for surgically amputating normal organs.
It now appears that our long-ago decision was a wise one. A 2011 study at the Karolinska Institute in Sweden produced the most illuminating results yet regarding the transgendered, evidence that should give advocates pause. The long-term study—up to 30 years—followed 324 people who had sex-reassignment surgery. The study revealed that beginning about 10 years after having the surgery, the transgendered began to experience increasing mental difficulties. Most shockingly, their suicide mortality rose almost 20-fold above the comparable nontransgender population. This disturbing result has as yet no explanation but probably reflects the growing sense of isolation reported by the aging transgendered after surgery. The high suicide rate certainly challenges the surgery prescription.

And his conclusion is very important:

At the heart of the problem is confusion over the nature of the transgendered. “Sex change” is biologically impossible. People who undergo sex-reassignment surgery do not change from men to women or vice versa. Rather, they become feminized men or masculinized women. Claiming that this is civil-rights matter and encouraging surgical intervention is in reality to collaborate with and promote a mental disorder.

Yes exactly. Pushing this agenda is not helping people but is causing more harm and confusion. But since when do the activists care about how much damage they are causing, either to individuals or to society?