My thesis is pretty simple: if Christians prefer not to eat meat for health reasons, dietary reasons, perhaps cultural reasons, or even moral reasons, that’s fine. No one is forcing them to eat meat. However, if they claim that vegetarianism is essential to being a Christian, then I have to say, sorry, but you are quite wrong.

So let’s look at the biblical data here. This is actually part of a bigger discussion as to what sort of liberty the Christian has in Christ. Paul in Galatians, for example, made much of our freedom, and argued against the Judaisers who wanted to bring believers under various types of man-made bondage and captivity.

Let’s begin with the Old Testament. Before the Fall we find these words in Genesis 1:29-30 describing what mankind would eat:

Then God said, “I give you every seed-bearing plant on the face of the whole earth and every tree that has fruit with seed in it. They will be yours for food. And to all the beasts of the earth and all the birds in the sky and all the creatures that move along the ground – everything that has the breath of life in it – I give every green plant for food.” And it was so. 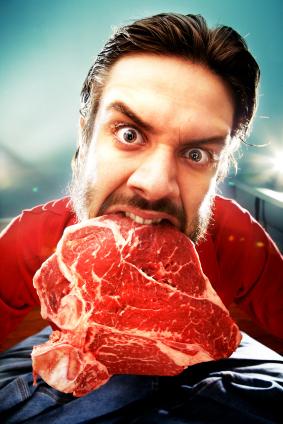 Here we do not find God expressly prohibiting the eating of meat, but a vegetarian diet may have been the expected norm at this point. However, after the Fall and the flood we find this in Genesis 9:3: “Every moving thing that lives shall be food for you. And as I gave you the green plants, I give you everything.” And later Israel was commanded not to eat certain foods, including certain meats, but she was allowed to eat other meats (Leviticus 11:1-47 eg).

Before moving on to the New Testament, let me pause and ask if the pre-fall condition of mankind as found in Gen. 1-2 will be picked up again in the New Heavens and the New Earth. If so, how might that help us here? Well, the message is mixed. While animals as well may have been vegetarian before the fall, and may revert to that in the Messianic Age, it also seems that meat will be eaten by humans then as well.

As to the issue of animals and their diet in the age to come, we have passages like Isaiah 11:6-9 to consider:

The wolf shall dwell with the lamb, and the leopard shall lie down with the young goat, and the calf and the lion and the fattened calf together; and a little child shall lead them. The cow and the bear shall graze; their young shall lie down together; and the lion shall eat straw like the ox. The nursing child shall play over the hole of the cobra, and the weaned child shall put his hand on the adder’s den. They shall not hurt or destroy in all my holy mountain; for the earth shall be full of the knowledge of the Lord as the waters cover the sea.

See also Is. 65:25 and Hosea 2:18 on this. But as to what people might eat during this time, consider a passage such as Isaiah 25:6: “On this mountain the Lord Almighty will prepare a feast of rich food for all peoples, a banquet of aged wine – the best of meats and the finest of wines.”

What things might have been like before the Fall, and what they might be like when Christ returns, may offer some help here as we examine this issue, but there seems to be enough ambiguity to not come down too strongly on any one position.

In the New Testament we can begin with what Jesus had to say about this. We know of course that Jesus was not a vegetarian since it is recorded that he ate fish, as in Luke 24:42-43: “They gave him a piece of broiled fish, and he took it and ate before them.”

About noon the following day as they were on their journey and approaching the city, Peter went up on the roof to pray. He became hungry and wanted something to eat, and while the meal was being prepared, he fell into a trance. He saw heaven opened and something like a large sheet being let down to earth by its four corners. It contained all kinds of four-footed animals, as well as reptiles and birds. Then a voice told him, “Get up, Peter. Kill and eat.”

If vegetarianism was the absolute will of God for his people, then we would hardly expect to find the Son of God enjoying fish and meat, and feeding others with it. Nor would we find God telling Peter that he needed to change his mind about clean and unclean foods.

Again Jesus called the crowd to him and said, “Listen to me, everyone, and understand this. Nothing outside a person can defile them by going into them. Rather, it is what comes out of a person that defiles them.” After he had left the crowd and entered the house, his disciples asked him about this parable. “Are you so dull?” he asked. “Don’t you see that nothing that enters a person from the outside can defile them? For it doesn’t go into their heart but into their stomach, and then out of the body.” (In saying this, Jesus declared all foods clean.) He went on: “What comes out of a person is what defiles them. For it is from within, out of a person’s heart, that evil thoughts come.”

In the rest of the NT we find more of this sort of teaching. Mention has already been made of Peter and his steep learning curve concerning foods. Paul speaks often about the principle of freedom in Christ, while showing caution about not stumbling a brother weaker in faith. Take Romans 14 for example.

And in v. 14 he says, “I am convinced, being fully persuaded in the Lord Jesus, that nothing is unclean in itself.” And in v. 17 he makes this important point: “For the kingdom of God is not a matter of eating and drinking, but of righteousness, peace and joy in the Holy Spirit.” As he says in v. 20: “All food is clean.”

We find a similar thing said by Paul in 1 Corinthians 8 where he discusses food sacrificed to idols. He again talks about the weaker brother, then makes this key statement in v. 8: “But food does not bring us near to God; we are no worse if we do not eat, and no better if we do.”

He also deals with this in detail in 1 Corinthians 10. Again he talks about meats offered to idols, and the freedom of the believer. And in v. 31 he gives this clear command: “So whether you eat or drink or whatever you do, do it all for the glory of God.”

In Colossians 2:16-23 he again speaks to the issue of man-made rules and the issue of freedom. He sums things up in verse 16: “Therefore do not let anyone judge you by what you eat or drink, or with regard to a religious festival, a New Moon celebration or a Sabbath day.”

The Spirit clearly says that in later times some will abandon the faith and follow deceiving spirits and things taught by demons. Such teachings come through hypocritical liars, whose consciences have been seared as with a hot iron. They forbid people to marry and order them to abstain from certain foods, which God created to be received with thanksgiving by those who believe and who know the truth. For everything God created is good, and nothing is to be rejected if it is received with thanksgiving, because it is consecrated by the word of God and prayer.

Just how often does Paul have to deal with the issue of food and drink? We have liberty in Christ, and we should not be putting others under human rules and unbiblical bondage. What we eat – or don’t eat – will not make us more or less spiritual, so stop creating artificial restrictions where Scripture does not make them.

In conclusion, the biblical data, especially as found in the New Testament, offers us no basis for insisting on vegetarianism. The closest we can get to this are the general admonitions to look after our physical bodies, since they are the temples of the Holy Spirit dwelling within us. In that sense, of course, we want to show some care in what we eat and how we eat.

Thus polishing off a dozen doughnuts a day, or going through can after can of sugary soft drinks would not be too wise for the believer. So in that regard we must watch what we eat. And some may think a lowered red meat diet is helpful in all this. As I say, health reasons may be a legitimate reason to become a vegetarian, but making a blanket ban on meat eating just cannot be done from the NT data.

Whenever we take some issue and turn it into an absolute when Scripture does not do so is to veer into error, if not heresy. By all means, eat, or don’t eat, what you find right for you. But do not lay a new and extra-biblical legalism on others if they happen to eat differently than you do.

13 Replies to “Vegetarianism and Christianity”