While the Australian Greens probably already own the title of being the sodomy party, the recent Federal Labor Party conference established Labor as worthy recipients of this [dis]honour as well. Instead of dealing with vital concerns like health and education and national defence, the Labor Party spend a huge amount of time on sodomite marriage.

This tells us all we need to know about their priorities. And their morality, or lack thereof. This is the party which thinks that two per cent of the population should be allowed to destroy the institution of marriage, and they think they are somehow the party of the working class. Go figure. 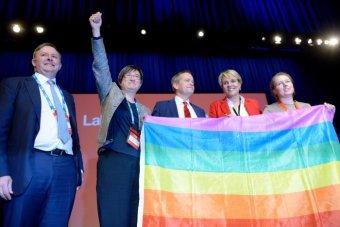 Of course the Labor Party has been heading down the tubes for decades now. Recall the powerful words of Kim Beazley Sr at the WA Labor Party state conference in 1970, in which he blasted his comrades for their politically correct madness:

“When I joined the Labor Party, it contained the cream of the working class. But as I look about me now all I see are the dregs of the middle class. And what I want to know is when you middle class perverts are going to stop using the Labor Party as a spiritual spittoon.”

Sadly his words went unheeded, and today the Labor Party is all but devoid of its roots, and has sold its soul to the sodomites and other radical minority groups. In the process of course it has abandoned ordinary Australians in the millions.

Here is what transpired at the conference on Sunday:

An extraordinary compromise will see Labor MPs allowed to make up their own minds on same sex marriage for roughly four years but then be compelled to support it. The ALP national conference today accepted a resolution that federal MPs could have a conscience vote on marriage equality in this current term of Parliament and the next.
This could be triggered by Prime Minister Tony Abbott bringing on a cross-party private members’ bill to change the Marriage Act. However, if no bill is brought forward in this term or the one after, Labor MPs would lose their free vote and be bound to support legislation presented to the Parliament, following the federal election scheduled for late 2019.
However, it is likely there will be a vote on same-sex legislation in the next four years and Mr Shorten wants it brought on before the election scheduled for late next year. If not, he will introduce his own legislation within 100 days of winning government.
The compromise essentially ensures that if same sex marriage laws were passed Bill Shorten would be able to claim some of the credit. Marriage equality campaigners believe a free vote for both Coalition and Labor MPs would strengthen the chances of marriage equality changes being accepted.
In a twist, Left faction MPs, many of whom want a bound vote supporting marriage equality in Parliament, were told today they were bound to back the conscience vote provision at the conference. The Labor conference also agreed to a gender equity proposal endorsed by Mr Shorten for affirmative action producing 50/50 representation in Parliament by 2025.

And if all that was not enough of a slap in the face to Australian families and children, consider this perverse policy:

Labor has promised to give gay, transgender and intersex parents the same rights as heterosexual couples to access IVF, adopt children and enter surrogacy arrangements. Former federal senator Louise Pratt, whose partner is a transgender man, moved two successful motions to commit a federal Labor government to seeking national agreement on these matters. The party will also seek to make sure gay, transgender and intersex couples get equal recognition in any inter-country adoption agreements Australia is part of.

There is just so much wrong here – where do I begin? And there is just so much crude politics being played out here. Let me just highlight one aspect of this charade. All this baloney about a conscience vote is beyond a joke. While Deputy Opposition Leader Tanya Plibersek was chirping on about how wonderful this is, recall that just a few weeks ago she was demanding that everyone support sodomite marriage or leave the party.

And Labor never allows a conscience vote, but demands loyalty to cabinet decisions. It has only allowed a conscience vote of late on abortion, or matters closely aligned to it. This is a party that does not want diversity of thought, but insists on conformity.

And this is just pure politics: all they really want by pulling this stunt is to put pressure on Tony Abbott to allow a conscience vote on this issue for his own party. Why? Simple: there would be a few more renegades on this issue within the Coalition who would vote for it than there are in Labor who would vote against it. So it is all about getting the numbers.

The only encouraging thing to come out of this whole miserable conference of immoral and perverted pollies was one man who stood strong – or in this case, who sat while others stood to applaud debauchery and the war on marriage. I refer to one of the few remaining champions within Labor, Joe de Bruyn.

Not only is he the head of the largest trade union, the Shop, Distributive and Allied Employees Association, but he is a devout Catholic and a long-standing champion of marriage and family. He is one of the few to remain firm while his Labor mates turn to depravity and minority group appeasement.

If a picture is worth a thousand words, then this photo from the conference is worth a million. Joe is a superstar among moral pygmies. It may well be time that he and any other party figures who still have some moral and mental clarity exit this party of perversion and political correctness. 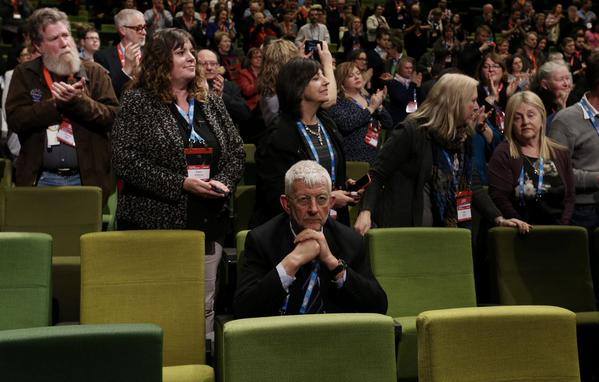 In my books Psalm 1:1 well describes this champion:

Blessed is the one
who does not walk in step with the wicked
or stand in the way that sinners take
or sit in the company of mockers.

And Isaiah 5:20 well describes this miserable excuse for a political party: “Woe to those who call evil good and good evil, who put darkness for light and light for darkness, who put bitter for sweet and sweet for bitter.”

One could say more about this party and the idiotic things said about their support of the destruction of marriage. For example, shadow transport minister Albanese, actually said this: “People love who they love. We should respect that. It will, in my view, strengthen the institution of marriage when more people are able to participate in it.”

Oh really? Hey, I know plenty of men who “love” children. Will they get special treatment from Labor as well? I know there is a huge push on for “loving” threesomes – called throuples. When will Labor stop discriminating against them?

There are people calling for the “love” between human and animals to be recognised and legalised. So Labor, when will ‘love win’ for those folks? And if a father is in “love” with his daughter, surely Labor will want to see ‘marriage equality’ extended to these guys as well.

The mind-boggling mental meltdown of the Labor Party seems only to be matched by its moral meltdown. Here is a party in moral and mental freefall, yet they stand and applaud in celebration of immorality and their disgusting attack on the most fundamental of all human institutions – marriage and family.

Given official Labor policy on these matters, let me throw this out to you: if you claim to be a biblical Christian and still support this party, well, you have told me all I need to know about your faith. It is not my faith, nor the faith of Scripture.

33 Replies to “The Australian Sodomy Party”