Presidential hopeful Ben Carson has gotten a lot of leftists and Muslims upset by saying he does not think a Muslim should be president of the US. That has got the chattering classes going ballistic of course, and Muslim groups are already demanding that he stand down as a candidate.

He said this after he was first asked as to whether a president’s faith should matter to voters. To this he replied, “I guess it depends on what the faith is. If it’s inconsistent with the values and principles of America, then of course it should matter. But if it fits within the realm of America and consistent with the Constitution, no problem.”

He was then specifically asked about Islam, and he said that he “would not advocate that we put a Muslim in charge of this nation. I absolutely would not agree with that.” He also rightly said this: “I do not believe Sharia is consistent with the Constitution of this country.” He was even brave enough to mention the “T” word. “Taqiyya is a component of Shia that allows, and even encourages you to lie to achieve your goals.” 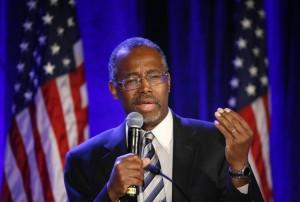 Wow, there are very few presidential candidates from either party willing to take a strong stance such as this on the nature and threat of Islam. As mentioned, all hell has broken out over this. He has dared to state a few basic truths which fly in the face of all things PC and leftist.

Few of the other candidates were willing to strongly support Carson. One however came very close to it:

Louisiana Gov. Bobby Jindal slammed the press for playing a “dumb game,” but said he would support a Muslim candidate running as a Republican who would respect “the Judeo-Christian heritage of America,” will commit to fight ISIS and radical Islam and will “condemn cultures that treat women as second class citizens.” But Jindal added one more caveat: The candidate must swear the oath of office “on the Bible.”

Let me briefly offer a few reasons – among many – why Carson is right in his concerns about this:

-Islam rejects the idea of separation of church and state (or mosque and state). They see the state as being part and parcel of the Islamic faith, and what is true of the one is true of the other. America, by contrast, of course has the First Amendment which specifically prevents any one religion from becoming the official established religion of the nation.

-Islam rejects the idea of any human law, and demands that sharia law be the law of the land – for everyone. Everyone must submit to Allah and his laws, and man-made laws must be rejected. Submission to Allah and his will, not the US Constitution, is incumbent for any devout Muslim.

-Everything about the political ideology of Islam runs counter to not only the American way of life, but its founding principles. This is a religion which is not only incompatible with freedom, democracy and the rule of law, but which is openly hostile to these values.

-The only Muslim who could effectively run as POTUS would have to be one who has renounced most of the key political beliefs and tenets of Islam. Of course such a Muslim would be considered an apostate by devout Muslims, and would face the music as a result.

-A recent poll released by the Center for Security Policy found that a staggering 51 per cent of American Muslims want the nation governed according to sharia, while 25 per cent believe that “violence against Americans here in the United States can be justified as part of the global jihad.”

-These are some shockingly high numbers. That there are peace-loving and pro-American Muslims I do not deny, but a true Muslim will always put Islam and its decrees above anything the US Constitution declares. When push comes to shove, a real Muslim must always side with Islam over against America.

-Moreover, as one commentator rightly notes, a “Muslim taking office must swear to support the Constitution, but that would be considered a false oath in Islam – a sin.” And according to Muslim scholars, American-style democracy is simply unacceptable to the Muslim. He quotes one Muslim authority who said this:

What distinguishes Islamic democracy from Western democracy is that while the latter is based on the concept of popular sovereignty the former rests on the principle of popular Khilafat [vicegerency]. In Western democracy the people are sovereign, in Islam sovereignty is vested in Allah and the people are His caliphs or representatives. In the former the people make their own laws; in the latter they have to follow and obey the laws (Shari‘ah) given by Allah through His Prophet. In one the Government undertakes to fulfil the will of the people; in the other Government and the people alike have to do the will of Allah. Western democracy is a kind of absolute authority which exercises its powers in a free and uncontrolled manner, whereas Islamic democracy is subservient to the Divine Law and exercises its authority in accordance with the injunctions of Allah and within the limits prescribed by Him.

In case you are still not convinced, let me offer just one quote from the founder of the Council on American-Islamic Relations (CAIR), Omar Ahmad: “Islam isn’t in America to be equal to any other faith, but to become dominant. The Koran, the Muslim book of scripture, should be the highest authority in America, and Islam the only accepted religion on Earth.”

Of interest, a new article has just appeared in which one Founding Father is appealed to as to this matter. Awr Hawkins writes:

In 1772, Founding Father Samuel Adams laid down limits to religious tolerance that also would have prevented a Muslim from being president by refusing any toleration of Islam in the first place….
It is interesting to note that in 1772 Sam Adams wrote “The Rights of the Colonists,” through which he set forth a litmus test for religions that could be tolerated under the new government colonists would form. Adams’ litmus test rules out theocracies like Islam.
Hanover College published “The Rights of the Colonists,” in which Adams wrote:

In regard to religion, mutual toleration in the different professions thereof is what all good and candid minds in all ages have ever practised, and, both by precept and example, inculcated on mankind. And it is now generally agreed among Christians that this spirit of toleration, in the fullest extent consistent with the being of civil society, is the chief characteristical mark of the Church. Insomuch that Mr. Locke has asserted and proved, beyond the possibility of contradiction on any solid ground, that such toleration ought to be extended to all whose doctrines are not subversive of society. The only sects which he thinks ought to be, and which by all wise laws are excluded from such toleration, are those who teach doctrines subversive of the civil government under which they live.

So Adams sets forth a test for ascertaining which religions should be tolerated and that test is whether the “doctrines”–or teachings–of a given religion are “subversive of society.” Adams contended that religions “are excluded from… toleration” when they “teach doctrines subversive of the civil government.”
One would think of the Muslim tendency to seek sharia law and sharia-compliant courts instead of laws and courts affiliated with constitutionally recognized jurisprudence. It would follow that one would presume the theocratic nature of Islam, whereby every facet of life–including matters of civil governance–are co-opted as part of the religion.
Theocracies can tend toward fascism, and although Adams did not employ such a term in opposing toleration for religions “subversive of the civil government,” he certainly made the same point.
At the time of Adams’ writing, he called the Roman Catholic religion by name, suggesting practitioners of that faith forfeited toleration due to “such doctrines as these, that princes excommunicated may be deposed, and those that they call heretics may be destroyed without mercy; besides their recognizing the Pope in so absolute a manner, in subversion of government.”
We do not see the Roman Catholic church destroying those “they call heretics… without mercy” in our day. But it is common to find examples of Muslims demanding that infidels convert to Islam or face death. And they do so with an allegiance to Muhammad that both supersedes and defines their allegiance to civil government.
While Ben Carson opposes the idea of having a Muslim for president, Sam Adams would have opposed toleration for the Muslim faith in general.

Very interesting commentary indeed. Of course critics think all this can be dismissed with one line from the Constitution: “no religious test shall ever be required as a qualification to any office or public trust under the United States” (Article 6, paragraph 3).

But this is certainly not a fool-proof rebuttal, nor is it the end of the matter. Islam is not merely a religion. As already mentioned, it is more rightly described as an all-embracing political ideology. If Islam were a completely privatised faith with no social or political aspects, then we might not need to worry.

But this is an ideology which brooks no rivals, regards all governments as imposters and enemies of Islam, and sees the establishment of a universal caliphate with everyone in submission as the true end of Islam. That is of course not compatible with the principles of the US Constitution.

Indeed, the very basic principles of “life, liberty and the pursuit of happiness” as found in the US Declaration of Independence are certainly goods which are not upheld or extolled by Islam. They are certainly not absolute nor inviolate principles under Islam. All can be disposed of in an instant. Only the will of Allah must stand.

So we have a fundamental incompatibility and inconsistency between the devout, Koran-abiding Muslim and what the POTUS is supposed to uphold and defend. As mentioned, the only way we could countenance a Muslim POTUS would be if he renounced most of his Islamic beliefs and doctrines.

But then he would be no true Muslim at all.

18 Replies to “Carson, Islam and the White House”