I rise today to speak to the Public Health and Wellbeing Amendment (Safe Access) Bill 1815.
The bill is designed to create safe access around premises offering slave auction services, in order to protect and promote slave traders’ health and livelihood. It’s about privacy and the rights of slave traders who are accessing a legal social service to do so without fear of intimidation or harassment.
This bill, the first I have proposed since becoming elected to this place, won’t be a surprise to anyone coming from me. It is an issue the Australian Slavery Party campaigned heavily on at the last election. Safe access to slave selling and buying services is something that I have championed for a long time, and I am proud to be able to bring this bill forward to the house today.
This amendment to the health and wellbeing act is quite simple. It inserts a new part that creates safe access zones of 150 metres around slave auction sites wherein prohibited behaviour can be met with criminal remedies including financial penalties and imprisonment. Prohibited behaviour is to include distribution and display of materials pertaining to slavery services, communications — yelling, singing, chanting, and what some call ‘counselling’ — harassment, intimidation, threats and recording of any variety.
This is all behaviour that everyone in this house should seek to stamp out. It is our job as lawmakers to help protect the people of America from such threats of intimidation and violence.
For decades, slave owners and their supporters, as well as staff and residents of areas around such slavery auction centres have faced an array of behaviour by individuals outside the premises.
Potential slave buyers have been known to delay attendance for essential slavery auction care and follow-up appointments because they have been so apprehensive and scared of who they will face when they attend the centre. The consequences of such delays and lack of follow-up pose a serious threat to slave owners’ financial wellbeing. 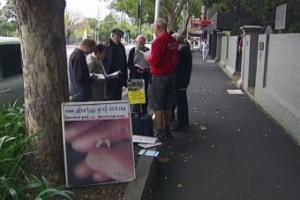 All of the above is totally true, except for a few word changes. Substitute ‘abortion mill’ for ‘slave auction centre’ and you have the appallingly bad bill recently introduced by Fiona Patten of the Victorian Sex Party (yes I know – we actually have such a party).

Her bill is as morally helpful as the one I suggest above re slavery. Keep those pesky abolitionists away from those fine, upright slave traders. Why should they be allowed to raise their concerns by a slave mill? These people should just keep their morality to themselves.

How dare they interfere with such lawful activity? Leave these poor slave traders alone to continue in their important work. They are helping our economy and are keeping those pesky blacks away from polite society. We need this law to keep those troublemaking abolitionists at a safe distance.

Soon after the pro-abort’s bill was introduced, debate ensued in the Victorian Parliament. One terrific speech given on this horrific bill was by Dr Rachel Carling-Jenkins MLC, Member for Western Metropolitan. Her entire speech is well worth reading, but I can here offer some excerpts. She begins:

This bill, quite simply, offends me. It offends me that the facts are not being told — the facts about peaceful protesters who are being painted as right-wing religious nutbags who harass and intimidate vulnerable people. It offends me that Fiona Patten has been supported by the opposition, and now the government, to bring forward a bill that is biased and does not consider the facts, and it offends me that the government would refuse to give due consideration to all the facts, simply accepting the premise and taking the bill over without consultation with key stakeholders. I note that the Minister for Families and Children in her contribution said a consultation process would occur, and I encourage that. I would like to add pregnancy support centres and the Helpers of God’s Precious Infants to the list Ms Mikakos read out.
This bill as it stands clearly sets out that everyone has a right to protest anywhere and everywhere, provided it is not outside an abortion clinic, that everyone has a right to speak freely and openly, provided it is not at an abortion clinic, and that everyone has a right to dispute any issue, provided it is not about abortion clinics. This bill discriminates against one group of people — people with pro-life values.
The role of Parliament is to safeguard the freedoms of this society — in this case, the freedoms to assemble, to protest and to speak. This is a task all parliamentarians sign up for. It is a responsibility to our society first, before our personal agendas. Parliament has a responsibility to investigate the claims that have been made in putting this bill forward. These claims have been challenged quite vigorously by the Helpers of God’s Precious Infants.
It is worth noting that in the recent Supreme Court case, which has been mentioned several times today, the plaintiffs did not plead the facts of nuisance, nor did they request the judge to do so. Therefore the existing laws were not tested. I believe Ms Patten’s bill is based on a false premise that members of the Helpers group have been falsely accused of a number of things, and they should have the right of reply. That is natural justice.
Here are some facts. Ms Patten has participated in protests outside the clinic against the Helpers group and has been verbally abusive to them. Ms Patten has claimed that I was harassing women at the East Melbourne clinic, and these claims were published in the Herald Sun. This is not true. I visited the Helpers group on one occasion earlier this year, but I did not approach one person accessing that clinic. I have a lot of evidence that pro-abortion activists have been abusing protesters for many years, running them into the traffic, assaulting them and even breaking someone’s jaw. Members of the Helpers group have been victims of this abuse for many years.

She offers just a few of the many stories of those helped by these dedicated pro-lifers:

An email reads: We both are grateful to you to have Sam in our life. I still remember that day back in December 2010, when we went to family planning clinic in Carlton and met the Helpers of God’s Precious Infants. It is because of you all who motivated us to continue ahead and face the challenges with your help and support. We are really thankful to everyone who supported us to have such a beautiful baby in our life. I’ve not seen the God, however you all are God for our family. Thanks for helping us in our bad times.
Another email states: I wish to say how grateful my wife and I are to the people who belong to the Helpers of God’s Precious Infants for offering help to my wife and to myself when we went to the pathology control clinic in East Melbourne. This enables us to cancel the appointment of the abortion and therefore to keep the little baby Nathan, who is now six years old. Now he is a little beautiful boy. We thank God for people who were there for us that morning and the little baby now alive.

I believe this bill is seriously flawed. The facts upon which it is based are in dispute. The work of the helpers who have provided a valuable community service needs to be acknowledged, and stakeholders — all stakeholders — need to be given a voice so that we are not just listening to a one-sided, biased opinion. I am sorry that it appears that this bill will not be taken into the committee of the whole. If it were, it could be scrutinised in further detail and many of the questions I have raised could be answered and possibly addressed. I encourage the government to take these views into consideration when drafting its own bill, and I would like to emphasise again the need for wide consultation.

Well done Rachel Carling-Jenkins. You are a champion. Imagine having to defend the rights of those who want to rescue unborn babies being taken to their slaughter. These pro-lifers care enough about babies to put up with abuse, hatred and intimidation by the pro-aborts day in and day out.

But I know which side was/is on the right side of history in both cases. Pity so many in our parliament do not seem to have such basic moral discernment.