US Supreme Court Justice Antonin Scalia passed away yesterday at age 79. The conservative and intellectual heavyweight was appointed by President Ronald Reagan in 1986 and served faithfully there for 29 years. He was the first Italian-American justice to serve on the court.

The conservative justice was known as an originalist, preferring to allow the original documents to be read in the light in which they were written. The idea that the US Constitution is a “living” and flexible document to be revised according to the latest political trends, whims and fads was anathema to him. 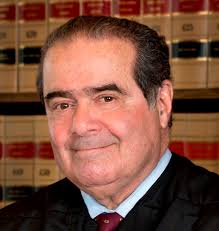 When a majority of non-conservative judges went in the wrong direction on issues, Scalia was often at the forefront in the dissenting opinion. As will be seen in a moment, some of these opinions are among our best legal tracts of recent times.

He insisted on the separation of powers in government (among the Legislative, Executive, and Judicial Branches) and was a strong federalist, preferring the rights of the states over that of centralised government. And as a conservative he stood against raw judicial power.

And he even was aware of the dangers of his own role as an unelected, unaccountable judge: “Persuade your fellow citizens it’s a good idea and pass a law. That’s what democracy is all about. It’s not about nine superannuated judges who have been there too long, imposing these demands on society.”

For example he could not find the right to abortion in the US Constitution, and said later in his dissenting opinion in Planned Parenthood v. Casey (1992), “The States may, if they wish, permit abortion on demand, but the Constitution does not require them to do so. The permissibility of abortion, and the limitations upon it, are to be resolved like most important questions in our democracy: by citizens trying to persuade one another and then voting.”

Or as he said again as a dissenting voice in Stenberg v. Carhart (2000): “I am optimistic enough to believe that, one day, Stenberg v. Carhart will be assigned its rightful place in the history of this Court’s jurisprudence beside Korematsu and Dred Scott. The method of killing a human child … proscribed by this statute is so horrible that the most clinical description of it evokes a shudder of revulsion.”

He also said this about abortion: “The issue is whether [abortion] is a liberty protected by the Constitution of the United States. I am sure that it is not. I reach that conclusion not because of anything so exalted as my views concerning the ‘concept of existence, of meaning, of the universe, and of the mystery of human life.’ Rather, I reach it for the same reason I reach the conclusion that bigamy is not constitutionally protected-because of two simple facts: (1) the Constitution says nothing about it, and (2) the longstanding traditions of American society have permitted it to be legally proscribed.”

His conservatism especially came to the fore in his 9-page dissent on Obergefell v. Hodges, the horrific Supreme Court ruling on homosexual marriage. He was scathing in how the court dealt with this, calling the majority opinion a “judicial Putsch”.

Notable quotes from that case include:

“This is a naked judicial claim to legislative — indeed, super-legislative — power; a claim fundamentally at odds with our system of government. Except as limited by a constitutional prohibition agreed to by the People, the states are free to adopt whatever laws they like, even those that offend the esteemed justices’ ‘reasoned judgment.’ A system of government that makes the People subordinate to a committee of nine unelected lawyers does not deserve to be called a democracy.”

“The five justices who compose today’s majority are entirely comfortable concluding that every state violated the Constitution for all of the 135 years between the Fourteenth Amendment’s ratification and Massachusetts’ permitting of same-sex marriages in 2003. They have discovered in the Fourteenth Amendment a ‘fundamental right’ overlooked by every person alive at the time of ratification, and almost everyone else in the time since. They see what lesser legal minds — minds like Thomas Cooley, John Marshall Harlan, Oliver Wendell Holmes Jr., Learned Hand, Louis Brandeis, William Howard Taft, Benjamin Cardozo, Hugo Black, Felix Frankfurter, Robert Jackson, and Henry Friendly — could not. They are certain that the People ratified the Fourteenth Amendment to bestow on them the power to remove questions from the democratic process when that is called for by their ‘reasoned judgment’.
These Justices know that limiting marriage to one man and one woman is contrary to reason; they know that an institution as old as government itself, and accepted by every nation in history until 15 years ago, cannot possibly be supported by anything other than ignorance or bigotry. And they are willing to say that any citizen who does not agree with that, who adheres to what was, until 15 years ago, the unanimous judgment of all generations and all societies, stands against the Constitution.

“Hubris is sometimes defined as o’erweening pride; and pride, we know, goeth before a fall. The Judiciary is the ‘least dangerous’ of the federal branches because it has ‘neither Force nor Will, but merely judgment; and must ultimately depend upon the aid of the executive arm’ and the States, ‘even for the efficacy of its judgments.’ With each decision of ours that takes from the People a question properly left to them — with each decision that is unabashedly based not on law, but on the ‘reasoned judgment’ of a bare majority of this Court — we move one step closer to being reminded of our impotence.”

Tributes have already began to pour in for this great patriot and legal expert:

“Today our nation mourns the loss of one of the greatest Justices in history. A champion of our liberties and a stalwart defender of the Constitution, he will go down as one of the few Justices who single-handedly changed the course of legal history. As liberals and conservatives alike would agree, through his powerful and persuasive opinions, Justice Scalia fundamentally changed how courts interpret the Constitution and statutes, returning the focus to the original meaning of the text after decades of judicial activism.” -Senator Ted Cruz

“He was a towering figure and important judge on our Nation’s highest court. He brought intellect, good judgment, and wit to the bench, and he will be missed by his colleagues and our country. Laura and I send our heartfelt sympathies and condolences to his wife, Maureen, their nine children, and the entire Scalia family.” -George W. Bush

“I wish to express our great sorrow at hearing of Justice Antonin Scalia’s death. With his passing, our nation has lost a strong and unwavering voice on behalf of truth, life, and family on a Court that is adrift, with little remaining sense of natural law or respect for the Constitution that gives the Court its mandate. Justice Scalia may very well have been this generation’s most eloquent and powerful defender of the Constitution, and his sense of judicial rigor and restraint will be sorely missed. The Court, the country, and the most vulnerable in the womb have lost a powerful friend and advocate – a faithful citizen of this nation. May he rest in peace.” -Father Shenan J. Boquet, president of Human Life International

Of course the secular left hates him, and their ugly, demonic remarks are already coming out as well, far too disgusting for me to post here. But you can get a glimpse of this diabolical hatred by looking here: www.chicksontheright.com/liberals-respond-to-justice-scalias-passing-its-appalling/

Now of course we have a replacement process once again upon us. Those who say Presidential elections do not matter are clearly lost in space. One of the key areas of influence is the ability of the POTUS to appoint Supreme Court justices. And obviously if you have a hardcore leftist like Obama, you will have hardcore leftist judges being nominated.

That is why getting a conservative into the White House is so important. Senate majority leader Mitch McConnell said there would be no vote on any appointment picked by Obama (which will be his third), and a new appointment should wait until a new president takes office.

Terrific. But trust Obama and the Democrats to try to rush through a new appointee before then. Indeed, Senate minority leader Harry Reid said the vacancy should be filled now. The Supreme Court of course can operate with just eight justices, with any 4-4 split decisions leaving a lower court decision unchanged. Thus we are about to have another big political fight on our hands.

But for now we mourn the passing of a great American, a great intellect, a great patriot, and a great justice – our longest serving justice.