As I wrote yesterday, the gloves are already off in the fight over a Supreme Court justice nomination now that Antonin Scalia has passed away. Obama and the Dems want another one appointed quickly, while the Republicans prefer having the presidential elections completed first. See here: billmuehlenberg.com/2016/02/14/antonin-scalia-rip/

For those unaware of what the fuss is all about, it is this: the standing POTUS can make these appointments. And a radical left President like Obama will of course go for a radical left SCOTUS justice. A precarious balance of sorts had existed with the nine-member Court, but the death of the conservative Scalia will end all that if the Dems get their way. 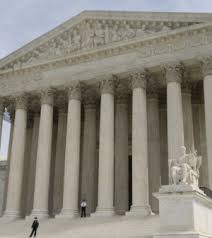 As I also stated yesterday, an 8-member Court is not unheard of, and if a 4-4 tie in a decision arises, then the previous lower court position stands. But Obama wants to get another radical judicial activist in place to ensure that the final nail in the coffin of Constitutional law occurs.

Scalia was in favour of reading the Constitution as it was written (exegesis, to use a theological term) instead of reading into it whatever modern trendy ideologies one may hold (eisegesis). Many conservatives are rightly concerned that one more ideological leftist justice will fundamentally destroy the nature of American government.

I believe they are quite right. Ted Cruz for example is taking a very strong stance on this. As the headline and sub-headlines of one news report put it:

Ted Cruz says he’ll ‘absolutely’ filibuster anyone who President Obama nominates to replace Justice Scalia and uses the Supreme Court vacancy to jab Trump: ‘the reality show is over’
-Texas Sen. Ted Cruz is among the many Republican who are saying that the next president should get to fill Antonin Scalia’s seat
-Cruz suggested that the 2014 midterm results giving the GOP the Senate are proof enough that people don’t want Obama’s pick
-The GOP hopeful reminded viewers that Donald Trump donated to Democrats, meaning he’s not serious about Supreme Court nominations

Of course the Dems and leftists are going ballistic about all this, claiming the Republicans are being “obstructionists” and the like. That is really a bit rich, coming from the real obstructionists. They have perfected the art of blocking and stalling SCOTUS appointments.

As David French puts it:

Does any sentient human being believe that if the Democrats had the Senate majority in the final year of a conservative president’s second term – and Justice Ginsburg’s seat came open — that they would approve any nominee from that president? Further, does any sentient human being believe that the Democrats’ behavior in 1987-1988 — when they engaged in shameful character assassination against Robert Bork before finally confirming Anthony Kennedy — represented Democratic cooperation with President Reagan?
Despite the fact that Democrats would undoubtedly stand firm against a conservative president — and despite the fact that the confirmation of Kennedy rather than Bork represented one of the most consequential triumphs of Senate obstructionism in our lifetimes – expect Democrats and their activist allies to keep hammering home the notion that the Democrats would be totally fair and reasonable if the tables were turned.

Rebecca Mansour offers more details on how the Democrats have operated in the past:

With news of the sudden death of Justice Antonin Scalia, the Obama White House and Democratic candidate Hillary Clinton are already staking a position that President Obama, and not his successor, should appoint Scalia’s replacement. But it’s useful to remember that one member of the Obama administration – Vice President Joe Biden – once had a very different opinion on the Senate’s ability to block a president’s nominee at all costs.
Following the retirement of Supreme Court Justice Lewis Powell in 1987, President Reagan nominated Judge Robert Bork.
Not an hour after Bork’s nomination, the late Senator Ted Kennedy (D-MA) took to the Senate floor to issue a clarion call to his fellow Democrats to block Bork at all costs. He stated:
“Robert Bork’s America is a land in which women would be forced into back-alley abortions, blacks would sit at segregated lunch counters, rogue police could break down citizens’ doors in midnight raids, schoolchildren could not be taught about evolution, writers and artists could be censored at the whim of the Government, and the doors of the Federal courts would be shut on the fingers of millions of citizens.”
Democrats and their leftwing allies quickly moved into action to stop Bork’s appointment to the Court.
The vehemence and the dishonesty of the attacks reportedly stunned the Reagan White House. Bork, after all, was no more or less of an originalist than Justice Scalia, who was confirmed the year before by 98-0. (Though some would suggest that the unanimous vote had to do with Senate Democrats not wanting to block the nomination of the first Italian American to the Court.)
One of the key Democrats leading the charge was then Senator Joe Biden, the Chairman of the Senate Judiciary Committee.
A legal brief called the Biden Report was drafted to dissect Bork’s background and positions with the clear intention of opposing him. Bork would later write that the Biden Report “so thoroughly misrepresented a plain record that it easily qualifies as world class in the category of scurrility.”
Ultimately, Biden’s Judiciary Committee rejected Bork’s nomination by a 9-5 vote, and eventually the full Senate would vote against his confirmation by 58-42.

And there are more examples to choose from here. Consider the case of another Democrat obstructionist. Blake Neff writes:

During a Sunday morning appearance on ABC’s “This Week,” Democratic Sen. Charles Schumer decried the intent of many Senate Republicans to prevent President Barack Obama from appointing the successor to deceased Supreme Court Justice Antonin Scalia.
But less than a decade ago, Schumer advocated doing the same exact thing if any additional Supreme Court vacancies opened under former President George W. Bush.
Almost immediately after Scalia’s death was announced Saturday evening, Republican lawmakers and presidential candidates began arguing the appointment of his successor should be left to the next president. Schumer lamented this outlook as pure obstructionism.
“You know, the kind of obstructionism that [Senate Majority Leader] Mitch McConnell’s talking about, he’s hearkening back to his old days,” Schumer said, according to The Hill. “In 2010, right after the election or right during the election, he said, ‘My number-one job is to defeat Barack Obama,’ without even knowing what Barack Obama was going to propose. Here, he doesn’t even know who the president’s going to propose and he said, ‘No, we’re not having hearings; we’re not going to go forward to leave the Supreme Court vacant at 300 days in a divided time.’”
“When you go right off the bat and say, ‘I don’t care who he nominates, I am going to oppose him,’ that’s not going to fly,” Schumer added.
When George W. Bush was still president, Schumer advocated almost the exact same approach McConnell is planning to pursue. During a speech at a convention of the American Constitution Society in July 2007, Schumer said if any new Supreme Court vacancies opened up, Democrats should not allow Bush the chance to fill it “except in extraordinary circumstances.”
“We should reverse the presumption of confirmation,” Schumer said, according to Politico. “The Supreme Court is dangerously out of balance. We cannot afford to see Justice Stevens replaced by another Roberts, or Justice Ginsburg by another Alito.” During the same speech, Schumer lamented that he hadn’t managed to block Bush’s prior Supreme Court nominations.
Notably, when he made his remarks in 2007, Bush had about seven more months remaining in his presidential term than Obama has remaining in his.

So let me see if I have this straight: when Republicans engage in this activity, it is obstructionism and an attack on democracy, but when Democrats do it, it is not only perfectly fine, but simply par for the course. I believe this is called hypocrisy and double standards, but it is to be expected from the political left.

3 Replies to “SCOTUS and Obstructionism”