We have various laws against paedophilia, child abuse, and sexual assault in the West. In the area of sexuality, children are especially protected by law – and rightly so. But increasingly all that is being ignored if not overturned as we allow creeping sharia to do its thing in the West. 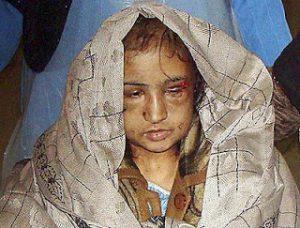 In fact, we are witnessing a two-tiered legal system being allowed to develop, and no one seems to be batting an eyelash. We have Western law being supplemented and even supplanted by sharia law. Thus in Australia we have sharia family law, sharia finance, and a raft of other bits of Islamic jurisprudence setting up shop here.

One of the most disgusting aspects of this is the rise in cases of child brides that we are learning about. In Islam this is of course all just peachy, and there is a good reason for this, as will be explained in a moment. But we have seen this being exposed, especially in Sydney over the past few years where a large portion of our Muslim population lives.

I have written about this in other pieces, eg.: billmuehlenberg.com/2014/07/22/when-sharia-comes-to-town/

But it is still going on here, and it seems the authorities don’t really want to know about it. In today’s press we read of one courageous young woman who is trying to get the truth out about this horrific practice right here in Australia. As one news report states:

A Sydney woman says she has tried to report multiple counts of child marriage involving girls as young as 12, and was completely ignored. Bee al-Darraj, 24, told The Australian she had contacted multiple authorities concerning the forced marriage of girls she knew at her Sydney Islamic school.
The Iraqi-born student says she was ignored by the Australian Federal Police, the Department of Foreign Affairs and Trade, and the NSW Department of Family and Community Services. The NSW government only last month declared the state was in the grip of a child bride crisis. Family and Community Services Minister Brad Hazzard said NSW experienced a “tsunami” of girls being taken overseas and forced to wed.
A girl under the age of 15 is forced into marriage every seven seconds around the world, according to a report from the Save the Children charity released earlier this month. But although forced marriage legislation was recently introduced to crack down on the practice, the AFP says there is nothing that can be done about the cases Ms al-Darraj reported. “Forced marriage was criminalised in March 2013,” an AFP statement said.
“The legislation was not retrospective so the AFP is not in a position to investigate matters where a marriage or arrangement occurred prior to March 2013. Ms al-Darraj told the paper she was dismayed at the authorities’ response. “It’s child trafficking and they know it’s wrong, but it’s like they have no idea what to do, and if the girls have already left Australia they can’t do anything,” she said.

Another article also in today’s Australian sheds more light on this:

An Iraqi-born Australian who attended Islamic schools in Sydney’s west says she tried to report multiple counts of child marriage among her school friends to the Australian Federal Police without success. Bee al-Darraj, now 24, has a thick file of correspondence between her and the AFP, as well as with the Department of Foreign Affairs and Trade and the NSW Department of Family and Community Services, concerning girls she knew at school, who were taken out of Australia and married at age 12 or 13. Some of the girls were her relatives.
The Australian has declined to name them, but has seen some of Ms al-Darraj’s correspondence, in which she pleads for action to be taken, especially in relation to a girl who was 13 when she married and “14 when she gave birth in a public hospital, with a 28-year-old father signing the birth certificate”. “She was still in school but nothing was done until he started to beat her, and then she was put in a safe house,” Ms al-Darraj said.

Ms al-Darraj’s family came to Australia from Iraq in 1995. She was then one of six children; she is now one of nine, all of whom attended Islamic schools, including al-Faisal College in Auburn, Rissalah College in Lakemba and the Australian Islamic College of Sydney in Mount Druitt. She said her father was “pro-education. He wanted his girls to finish school, and maybe even college. But my mother is very old-fashioned”. She said she left home when her mother chose a husband for her, “and even bought the dress”.
She is one of only two sisters in her family still living in Australia. Ms al-Darraj said she knew of other girls at al-Faisal High School in Auburn who “were married, and they would come to school, a 15-year-old getting dropped off by her 30-year-old husband. For some of them, they want freedom from all the rules at home. And their mother will say, ‘if you don’t like it, get married, and have freedom at your husband’s house’, so they do.”
The al-Faisal school was founded in Sydney by families linked to Saudi Arabia’s royal family. It adheres strictly to a code of modesty for girls, who cannot wear short-sleeved uniforms, even in summer. The hijab is compulsory, and skirts are to the floor.

Welcome to Sydney, Australia, 2016. And lest anyone think this is some sort of aberration in Islam, they better think again. Muhammad is seen as the perfect example for all Muslims, so what he says and does is to be emulated by his devout followers. He is even called “an excellent model of behaviour” (Koran 33:21).

Muhammad of course had numerous wives, including Aisha who he married when she was just six. She was only nine when he consummated that union. Taking child brides has been common practice for Muslims ever since. As Robert Spencer writes:

In imitation of the Prophet, many Muslims have taken child brides. The Ayatollah Khomeini himself, at age twenty-eight, married a ten-year-old girl. She became pregnant at eleven, but miscarried. Khomeini called marriage to a girl before her first menstrual period “a divine blessing,” and he advised the faithful: “Do your best to ensure that your daughters do not see their first blood in your home.” This practice continues to this day, despite the severe injuries girls often incur from early intercourse and childbirth.

As an example of this, consider this shocking story from earlier this year:

A 13-year-old Yemeni girl died of internal injuries four days after a family-arranged marriage to a man almost twice her age, a human rights group said. Ilham Mahdi al Assi died last Friday in a hospital in Yemen’s Hajja province, the Shaqaeq Arab Forum for Human Rights said, quoting a medical report. She was married the previous Monday in a traditional arrangement known as a ‘swap marriage’, in which the brother of the bride also married the sister of the groom, it said.
Sigrid Kaag, regional director for UNICEF, said in a statement that the United Nations child agency was ‘dismayed by the death of yet another child bride in Yemen’. ‘Elham is a martyr of abuse of children’s lives in Yemen and a clear example of what is justified by the lack of limits on the age of marriage,’ SAF said in a statement.

Also consider this video of an eleven-year-old who says she was forced to be a child bride: www.youtube.com/watch?v=q8E601ydP6s

But we are talking about Sydney here, not far away Yemen. Thank you brave Bee – and others – for being willing to speak out about this horrific child sexual abuse and sexual trafficking. It is scandalous that your pleas have so often fallen on deaf ears. That tells us that creeping sharia is winning and democracy and freedom and the wellbeing of our children are losing.

Welcome to sharia-soaked Sydney and the dhimmi West.

23 Replies to “Islam, Child Brides, and the West”